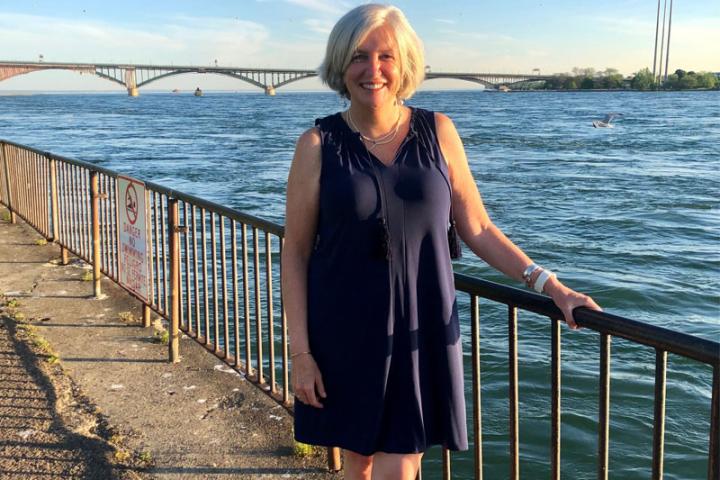 For the past four years, Cathy Creighton ’87 has had a large, black, six-picture frame hanging on the wall of her office at Creighton, Johnson and Giroux, the law firm she helped found in 2002.

The sixth carries a script message authored by Fleron:

In a way, the frame has turned prophetic, featuring Gray, the first director of ILR’s first extension office in Buffalo, Fleron, who has directed ILR programs in Buffalo since 1976, and Creighton, who steps into the ILR Buffalo Co-Lab director role on Jan. 1.

“I gave that to Cathy soon after Kate had been a High Road Fellow and when Cathy had just moved into her law firm’s new offices,” said Fleron, who will continue working at the Co-Lab on political economy initiatives. “I meant it as a thank you for all the contributions she has made over the years to ILR’s success. The personal gift took the form of Lois, me, Cathy and Kate just because we all share such strong commitment to worker power and fairness, as well as a bit of an irreverent or ‘sassy’ personality trait.”

Creighton has been connected to the Co-Lab for many years. For eight years she taught classes to workers interested in becoming union representatives through the ILR Extension’s Labor Studies Program. She has also been involved with ILR’s High Road Fellowship program since its inception, serving on the program’s advisory board.

“I am beyond thrilled to have Cathy join ILR and Outreach,” said Associate Professor Ariel Avgar, who is ILR's associate dean for Outreach. “Cathy brings to her role a wealth of experience in the labor and employment arena, a deep commitment to Buffalo, and a genuine enthusiasm for the ILR School. I look forward to working with her and I'm excited about the next chapter for Buffalo Co-Lab under her leadership.”

“I bring two things to the table,” said Creighton of her appointment. “First of all, I’m an ILR grad and I also know this particular program because I've been exposed to it through my time teaching and also through my work on the High Road advisory board. Second, I bring a great deal of working knowledge of the labor economy and the labor community through my work as a lawyer for the last 26 years. I have worked with dozens of labor unions, and the flip side of that coin is that I've worked with every management lawyer in Buffalo and their employer clients.”

Creighton, who helped draft Buffalo’s living wage ordinance, is former chair of the city’s Living Wage Commission. She is also a director of the Erie County Fiscal Stability Authority.

In addition, Creighton serves on the Coalition for Economic Justice Workers’ Rights Board, and was formerly a board member of the Lawyers Coordinating Committee of the AFL-CIO and the Labor and Employment Relations Association of Western New York.

“My commitment to labor stems not from something radical, but from common decency — the belief that people should have a voice in their workplace and be treated fairly,” she said.

It also stems from personal experience.

The child of Irish immigrants, Creighton recognizes that her story is the prototypical American Dream.

Her mother, who attended school through eighth grade, was a waitress. Her father, who completed sixth grade, worked for the New York Telephone Company (later Verizon) and was a member of Communications Workers of America Local 1101.

“That membership, came with very good wages and benefits, and retirement benefits such as a pension and retiree health care, all of which allowed us to have a middle-class life,” Creighton said. “It provided comfort and stability.”

After graduating from Cornell, Creighton earned a law degree from the Boston University School of Law and became a field attorney for the National Labor Relations Board in Brooklyn. From there, she joined Lipsitz Green, in Buffalo.

In 2002, she helped found Creighton, Pearce, Johnsen & Giroux, a firm which represents about 45 unions.

Now, she is returning to her roots at ILR.

“It will be a new challenge,” Creighton said. “Something completely different, but in the same field. I think the thing that’s the most appealing for me is that I can hopefully help employees and their employers in a different context – through education and research.”

As for the Co-Lab itself, Creighton hopes to expand its work outside the Buffalo workforce and into government by engaging in research that can be used to develop high road model legislation for employee rights in New York state and beyond.

Creighton would also like to see more ILR alumni involvement in Buffalo, a returned focus on education for workers and managers and an expansion of High Roads engaged learning link with students on campus.

Fleron has no doubt that Creighton is up to the task.

“Having Cathy take over the program is like passing the baton to a teammate in a relay race—you feel exhilarated, relieved and actively optimistic. Her preparation to run the next leg of the race for ILR in Buffalo assures wins in reaching the ultimate team prize—a more equitable, vibrant and sustainable economy.