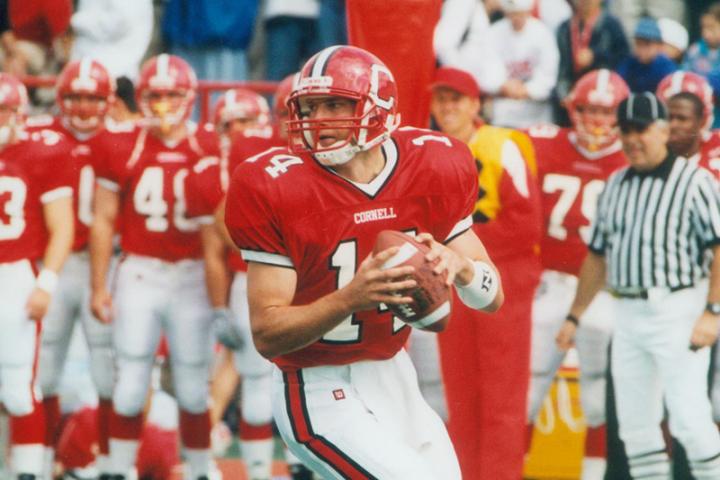 In December 2019, Ricky Rahne ’02 took over as the head football coach at Old Dominion University. The job is the first head coaching position in a 17-year career that has taken the Cornell Hall of Famer to assistant coaching stops at his alma mater, as well as Holy Cross, Kansas State, Vanderbilt and Penn State.

After the introductory press conference, Rahne got to work hiring a staff, meeting with returning players, connecting with alumni and planning for the team’s spring season.

Then, just days away from the first official spring practice with his new team, the world came to stop due to COVID-19.

Like nearly everyone in the country, Rahne had to rethink everything he and his staff did on a daily basis. Instead of travelling to high schools and visiting potential student-athletes in their homes and getting to know them and their families, Rahne and his assistants were forced to recruit via phone and through social media channels. Instead of spring practices, where more than 100 Old Dominion players would learn the new offensive and defensive systems being implemented by the new staff, the team resorted to small position group meetings – the smallest being the six quarterbacks with the largest being the 16 members of the offensive line – held via Zoom. Instead of working out in the athletic department’s 17,000 square foot weight room, which houses both free weights as well as dozens of cardio workout machines, players received individual workout programs tailored to be done in their homes with a lack of equipment.

When the Old Dominion campus reopened in the fall, Rahne finally saw his team in person, but also had to deal with new safety protocols that limited the number of players who could gather.

“It was a difficult time for everybody in our organization, from a mental standpoint,” Rahne said. “I've been focused, probably more than anything, on just making sure that everybody's doing okay from a mental health perspective. But, our players have been really resilient and our coaches have been terrific. Sometimes, I think maybe I'm the only one struggling a little.

“Thankfully, my wife Jennifer [Neuberger], who graduated from Cornell with a civil engineering degree, is an eternal optimist. She tells me that this is the best thing that's ever happened to us, because now we have time to focus on the details and really get into establishing our culture with the team.”

In making those transitions and focusing on non-football related activities – like mental health and team culture – Rahne has relied on some of the skills he learned during his time in the ILR School.

“In terms of learning organizational behavior, those classes have been really useful throughout my career because I have 105 guys on my team. They're from multiple states and multiple backgrounds and multiple ethnicities. And, they have multiple reasons for playing. So, in order to form a cohesive unit, I have to find a way to motivate each guy, and I have to find the best way to get the whole team going in the same direction.”

Rahne, who was drawn to labor history classes as an undergraduate, sees many ILR lessons in his day-to-day work. He credits his classes with helping him to see all sides of an argument, being thorough in his preparations, and managing more effectively.

“I have very strong opinions on things and it's something that has served me well, but I do have the ability to see both sides of an argument, and that's from my experience in ILR,” Rahne said. “Our staff right now is the youngest in the country, and they have a lot of opinions, and they have a lot of thoughts, and it's important for me to be able to come to a consensus on everything and then find a way to administer that consensus.”

“And one of the classes I really enjoyed was labor law. I loved it because, if nothing else, it taught me how to think and to read a problem all the way through before I tried to come up with an answer. I still remember on one of our tests, you got bonus points if you read the whole test first. And that's helped me in every step of my career.”

When it comes to managing his staff, Rahne draws from theory he learned at ILR, as well as personal experience.

“I was doing an interview not too long ago and I actually mentioned Herzberg's Motivation Theory, the two-factor theory of job satisfaction,” Rahne said. “I was explaining that I have seen that in my career. I've been in places where guys didn't make very much money, but they were very satisfied because of how they were treated by their bosses. I've been other places where they were starting to make a little bit more money, but every day was a battle to motivate and to get those guys going, because they just weren't treated very well.

“On the flip side of that, in a place like my last job at Penn State with Coach Franklin, he was a great guy to work for and we were all fairly compensated. So, I saw a well-motivated staff that worked really well together, and did some really special things. So, I think that just even little things like that, theory that I’ve seen put into practice, has definitely helped me.”

The degree has served him so well that during his time at Penn State – which houses a School of Labor and Employment Relations – Rahne encouraged “multiple players” to transfer into the major.

Rahne came to the ILR School from Morrison, Colorado, where in his senior year he led the Bear Creek High School football team to a national ranking with a state-best 3,114 passing yards. Over his career with the Big Red, the three-year starter at quarterback set 33 Cornell passing and total offense records. He left Schoellkopf Field as the all-time leader in yards (7,710) – a mark that also ranked third all-time in Ivy League history – as well as completions (678), touchdown passes (54) and 200-yard games (25).

After graduating, Rahne spent a few years working in the private sector before finding his way back to the gridiron with a position as an assistant defensive line coach at Holy Cross.

“When I went to Cornell, everyone told me, ‘Hey, you're going to be able to do whatever you want with your life,’” said Rahne. “And I know that being a football coach isn’t exactly what most people thought I would be, but this is exactly what I wanted to do.