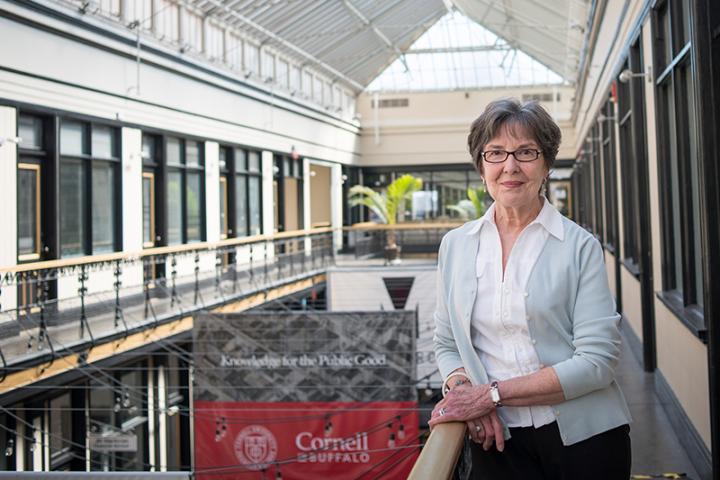 The ILR School’s Western New York presence has evolved in many ways during its 75 years, but Lou Jean Fleron’s efforts to make the region a better place for working people has been a constant for more than four decades.

Fleron, who has directed ILR programs in Buffalo since 1976, announced her retirement as director this past fall. In her place steps Cathy Creighton ’87. Fleron, however, will continue to lead the ILR Buffalo Co-Lab’s economic development initiatives.

“I am always drawn to a substantive focus on education, research and direct action around economic development,” Fleron said. “When I think of it from a career perspective, ILR has given me, and will continue to give me, extraordinary colleagues and enormous opportunities to change what I do so I can best make a difference.”

Born in Hutchinson, Kansas, Fleron was raised on the Great Plains by working-class parents – her mother was a schoolteacher, her father worked in the oilfields – and she attributes her “working class” upbringing to her commitment to equality.

“There's a certain vastness to the Kansas landscape that makes you feel comfortably small,” Fleron said. “And it always seemed that out there, there weren't great economic differences among people in our community. We shared a lot more than anything that divided us. I'm a Midwestern pragmatist. I believe you have to listen to everybody, and you have to work with people where they are, and you have to try to understand diverse interests and come to a common good. That is something that I think ILR, as an institution, is in some ways uniquely positioned to do.”

Fleron also credits her extended family – which includes her husband, three children, ten grandchildren and 13 great grandchildren – in connecting her to the work she has done in upstate New York.

“Not that the quantity is anything, just that my family—the ones before and the ones after me—are central to the way I think about what is important in life and our responsibility to care for everybody, not just ourselves,” Fleron said. “I am a link from my ancestors, like those who were anti-slavery Kansas settlers, to my descendants, who carry on the values of equality and active citizenship.”

During her time at Buffalo, Fleron helped organize adjunct professors, and served on the first Title IX faculty committee at the university. Through that advocacy work, she came to the attention of, and began teaching at, Cornell’s Buffalo Labor Studies program.

“It is important to note that the breadth and depth of our ILR impact in Buffalo would not be possible without Lou Jean Fleron’s tireless dedication, commitment and vision over the past four decades,” said ILR Associate Dean for Outreach Ariel Avgar. “I am grateful to Lou Jean for her leadership and passion for our land-grant mission, but I am also grateful to have her continue to contribute in her new role to the Buffalo Co-Lab and to ILR.”

Fleron has been at the center of initiatives such as The High Road Fellowship program, the Partnership for the Public Good and the ILR Institute for Industry Studies. While picking a favorite would be like “choosing between your children,” she pointed to the ways they moved industry practices and economic policies toward more equitable opportunity and innovation in Buffalo and beyond.

“For over three decades, the Institute for Industry Studies tackled deindustrialization with applied research and workplace education aimed at keeping good jobs in competitive industries,” Fleron said. “In one national program, we sent teams of teachers to Ford plants all over the country to bring supervisors, union representatives, and rank and file workers together for week-long classes to learn about the global economy, the auto industry, labor history, collective bargaining, diversity and team-building in the workplace.

“Buffalo’s economic revitalization is based on grassroots community development and ‘radical collaborations,’ to use a term historically associated with ILR. The Partnership for the Public Good grew out of our work with the Buffalo Living Wage Commission and is now a powerful ally with over 300 organizational partners collaborating on a more just, sustainable and culturally vibrant Buffalo Niagara.

“Finally, since 2009 High Road Fellowships have been awarded to 208 Cornell undergraduates for summers of hands-on work with Partnership for the Public Good community organizations. They leave Buffalo with stronger civic organizations and take with them valuable career experience and inspiration.”

Not one to linger on past accomplishments, Fleron looks forward to continuing her work with the Co-Lab as an “activist political economist.”

“I'm a very optimistic person by nature,” she said. “But, I see an immense need to continue the work that is really about providing opportunity for everybody in the economy. I think that racial and economic inequality is our nation's worst problem. Christian Bay says in the book, “On the Structure of Freedom,” that ‘a society is as free as its underdogs are.’ And that really motivates me.

“I've seen the impact of ILR in other immensely challenging times and I believe that the Co-Lab has the potential to continue, especially along with our community allies, to address the huge problems of these times.”

Fleron, who is excited to have more time to spend with her husband, Jack Williams, and the rest of their family, has no plans to step away from the Co-Lab and her life’s work.

“People always ask me when I’m going to ‘really’ retire and I always say, ‘Well, never, unless we get everything fixed.’ I guess that’s when I'll retire. Or, when I get to the point where I'm not useful anymore, but hopefully I’ll find a way to keep going.”