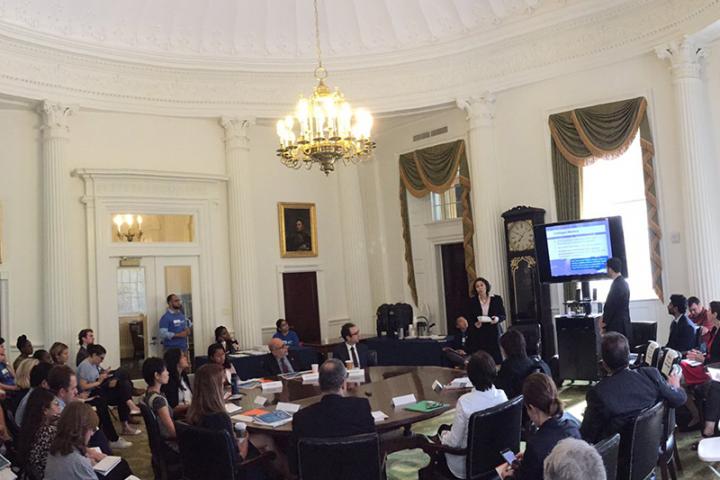 Many New York City residents struggle with scheduling challenges at work and inadequate pay, according to a survey The Worker Institute at Cornell released with the New York City Office of Labor Policy & Standards.

Some report being subjected to work-related legal violations and about 40 percent of New Yorkers surveyed said they struggle to pay their household expenses. Most say the economy favors the wealthiest.

Eighty-two percent of those polled want New York City to do more to protect immigrants, and 75 percent want the city to work harder at defending worker rights following the results of the 2016 presidential election.

Those are some of the key findings from “Working in NYC: Results from the 2017 Empire State Poll,” which used questions developed by The Worker Institute and the newly established Office of Labor Policy & Standards.

Survey interviews were completed from February through April this year. Key findings are based on interviews with 277 New York City residents, 174 of whom were employed when interviewed.

The city’s labor market has grown stronger, with its unemployment rate the first five months of 2017 averaging 4.2 percent, its lowest level in about 50 years, according to the survey.

Wages are going up and state minimum wage increases each year from 2017 through 2019 will provide an additional boost to many workers, the report said.

“Still, the survey findings suggest that many New Yorkers continue to struggle financially, and that most working New Yorkers believe today’s economy is not one in which everyone has an equal chance to get ahead,” wrote the report’s authors. They are Sanjay Pinto of The Worker Institute and Sarah Leberstein and Sam Krinsky of the Office of Labor Policy & Standards.

Among the key findings:

According to report authors, findings “also indicate that, even as unemployment has decreased and labor force participation has risen to its highest level in many years, a sizable share of New Yorkers are in non-standard work arrangements such as independent contractor arrangements or part-time work, which leaves them without dependable hours, income, or benefits.”

“Responding to this set of challenges requires discussion of multiple approaches – increasing access to predictable and full-time hours, strengthening protections and benefits for all workers, and further developing benefit arrangements that are not tied a person’s current employment status.”

Ileen DeVault, professor of labor history at the ILR School and academic director of The Worker Institute, said, “The Worker Institute at Cornell ILR is very pleased to work with OLPS on this research into the challenges facing many New York City workers.”

“The findings on what New Yorkers think about local government action to protect immigrants and workers’ rights suggest broad public support” for the Office of Labor Policy & Standards mandate.