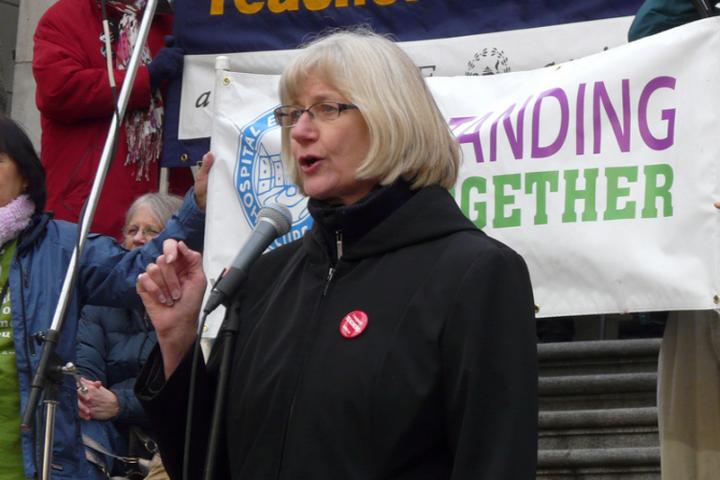 On Tuesday, March 22, The Worker Institute hosted a conversation in New York City with British Columbia Federation of Labour (BCFED) President Irene Lanzinger and Professor Emeritus Lois Gray of The Worker Institute. Irene shared perspectives on developing women’s leadership in the labor movement and reflected on her own journey of being the first woman elected to lead the federation.

Irene became the first woman to be elected as President of the 500,000 member BCFED in November 2014. She began her career as a secondary science and math teacher in Abbotsford, at which time she became a member of the BC Teachers’ Federation (BCTF). In 2000, Irene became chief negotiator for the BCTF, bargaining on behalf of 41,000 members province-wide. Irene is currently one of three Canadian labor leaders enrolled in the National Labor Leadership Initiative (NLLI).

Lois responded to Irene’s story and shared her own perspectives as a leading expert on women in the labor movement.

“Irene Lanzinger is a dynamic example of a labor leader who climbed the ladder to the top office in her union by demonstrating her dedication and activism at the rank and file level, inspiring her fellow workers to support her for leadership roles,” said Lois Gray.

Lois is the Jean McKelvey-Alice Grant Professor Emerita of Labor Management Relations at Cornell University's ILR School and The Worker Institute at Cornell. One of the pioneers of the modern field of labor education, Lois was among a group of labor educators who established the University and College Labor Education Association (UCLEA), the professional association for labor educators, now the UALE. She was the first woman to serve as president of UCLEA and went on to develop the UALE Women’s Summer School, which recently celebrated it’s 40th anniversary.