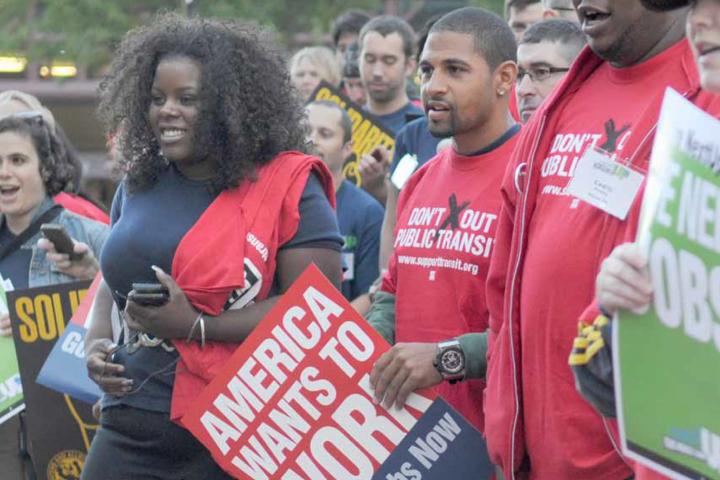 There was star-power on hand to energize the huge Chicago Hilton ballroom jammed with the most diverse AFL-CIO crowd in history, according to Schuler in her plenary address. Danny Glover, heavily involved in the UAW's campaign for worker justice at Nissan's Canton, Mississippi plant, drew on the inseparable struggles for civil rights and worker rights. Oscar-winning hip hop lyricist Rhymefest performed his Selma hit ‘Glory’ and spoke on Sunday about the importance of social activism. AFL-CIO President Richard Trumka reminded the crowd of the serious barriers to unionization in America and the need to urgently rebuild labor in an era of unprecedented corporate power.

An international young worker session led by Cesar Moreno from the American Federation of Teachers, Amy Huziak from the Canadian Labour Conference, Alfredo Santos from CUT Brazil, and Deanne Nagle from United Students Against Sweatshops showed how the shared experience of 73 million unemployed young people around the world could be harnessed to fight for more equitable economic and social policies. Social media can play a huge role in building international labor solidarity and drawing attention to disparate movements of contingent workers.

Activism on college campuses was explored in several sessions, including ‘Does Your Job Make the Grade? Higher Ed Organizing Strategies’, co-presented by two organizers from the United Auto Workers and this author. Discussion centered on the day-to-day experience of graduate student workers and the specific strategies deployed at institutions (including New York University, Columbia University, The University of Massachusetts, and Cornell), to force administrators to recognize graduate workers and begin bargaining over wages and conditions. On the modern, corporate university campus, policy changes that directly affect student workers – who often carry over half the teaching load -- are often announced without consultation. According to the panel, we must remember what the university is for and who it is meant to serve.

The summit was more than just a talkfest. On Saturday morning a series of public actions were launched by local labor affiliates including a boisterous ‘Fight for 15’ demonstration that shut down a West Side McDonald’s that pays poverty wages. Other attendees canvassed on behalf of the Chicago Teachers Union in advance of looming city-wide elections and picketed a local Nissan dealer. NextUp wrapped with a boisterous performance from socially-minded hip-hopper Jasiri X.

The bonds forged at NextUp will help a new generation of labor activists connect over common struggles and build the coalitions needed to grow young worker power. As Trumka noted, right now the United States is champing at the bit for change and the response of young workers, the historic vanguard, will help shape labor relations for decades to come.