Arbitration Under Fire:
Research Evidence on the Pros and Cons of Binding Arbitration 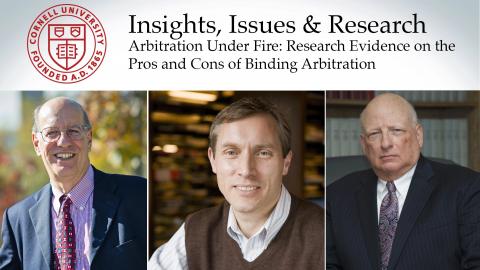 Binding arbitration as a dispute resolution mechanism has come under increasing attack, both in the popular media and in policy debates. This webcast will look at these new attacks on binding arbitration, where they are directed, what has inspired them and what the research evidence says about their validity.

The webcast will examine what the research evidence can tell us about these issues, with perspectives from Professors Alex Colvin and David Lipsky, two of the leading empirical researchers in the arbitration field.

Additional perspective from:  Sara Horowitz ’84 – Founder and Executive Director of the Freelancers Union

In a paper recently presented at the Brookings Institution in Washington D.C., Seth Harris ‘83 and Alan Krueger ‘83 propose ways to modernize labor laws for work in the 21st century.  The paper proposes a new legal category for workers, “independent workers,” those who occupy the gray area between employees and independent contractors. By extending many of the legal benefits and protections found in employment relationships to independent workers, the proposal would protect and extend the social compact between workers and employers, and reduce the legal uncertainty and legal costs that currently beset many independent worker relationships. In this program, Harris will offer an inside glimpse to the proposal as well as take questions from our online audience.