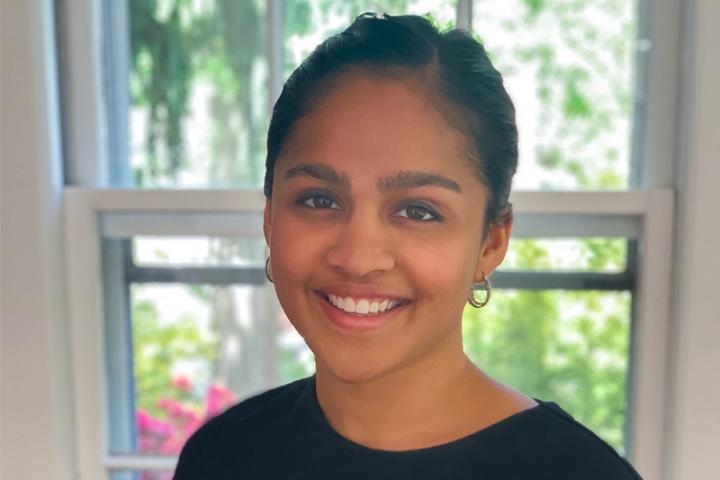 Leading the Scheinman Conflict Resolution Club was one of Pinto's many activities.

Shaloni Pinto came to ILR in 2016. Raised by an electrician and a nurse in Phoenix, Arizona, Shaloni had a deep understanding of the importance of work and how it structures people’s lives. “I really wanted to pursue an education that would reflect my background,” Shaloni says.

When Shaloni was in high school, she was involved with speech and debate and learned to argue. “Debate was helpful for writing papers,” she said. “But learning how to negotiate and resolve issues built a skillset that taught me how to be a better student, leader and team member.”

As president of the Scheinman Dispute Resolution Club, Shaloni created a community around dispute resolution on campus, working with undergraduate students, graduate students and neutrals in various industries around the country. Shaloni realized that this work was in line with the United Nations’ 17 Sustainable Development Goals.

The 16th goal, to “promote peaceful and inclusive societies for sustainable development, provide access to justice for all and build effective, accountable and inclusive institutions at all levels,” aligned with the goals of the Scheinman club,” she said.

Throughout her time in the fellowship, Shaloni and her executive board found new ways of sharing dispute resolution practices with Cornell’s campus, organizing events with other ILR and Cornell student organizations. In addition to bringing diverse speakers to campus, the Scheinman Dispute Resolution Club held mock arbitrations and mediations to encourage students to practice dispute resolution skills they were introduced to in the ILR curriculum.

These experiences, alongside an ILR education, helped Shaloni find a path following graduation. As a current research analyst at Crescendo Branding, a digital marketing and communications firm based in New York. Shaloni says, “what I learned in ILR has been really helpful in determining how to express information in a conflicted setting.”

At Cornell, Shaloni joined Marginalia, the undergraduate poetry review,to pursue her passion as a designer, poet and community organizer. As Shaloni grew more involved with the Cornell’s literary community, she worked with other Marginalia members to find spaces to encourage diverse student voice and expression within the Cornell community and realized how important it is to have student voices lifted by Marginalia.

In particular, Shaloni fondly remembers hosting “Radiant Voices, Radical Poetry Night” an event attended by over 100 people that focused on activist voices and poetic expression. “We had people read and speak poetry in multiple languages and multiple styles and I thought it was the best way to celebrate and share and celebrate diverse experiences across Cornell University,” she said.

Through her participation in Marginalia, Shaloni met Rachel Whalen, A&S ’19, who created Poetic Justice, an after-school poetry club with students of George Junior Republic High School in Freeville, New York. Poetic Justice was “one of my most important experiences at Cornell,” Shaloni said.

During her senior year, Shaloni applied to be a part of the Rural Humanities seminar, a seminar which offered funding for public-facing research humanities projects and/or engaged community humanities initiatives. Motivated to provide Poetic Justice with greater resources, Shaloni considered a number of options for her humanities project, such as creating a performance space or a physical poetry library.

However, these plans could not be realized; in March, the pandemic moved Cornell instruction and activities online.  With the assistance of Karen McLaughlin, the literary coach at George Junior Republic, Shaloni created, designed and published  www.poetryafterschool.com, a website that could collect and share the knowledge and education of the club while ensuring it was accessible to all the students during quarantine.

Last summer, Shaloni received additional funding to continue her work with Poetic Justice through the Community Partnership Grant. Although Poetic Justice cannot yet meet in person, this website acts as the digital community maintaining the connection between Cornell and George Junior.

America was recently reminded of the power of poetry by Amanda Gorman’s presidential inauguration poem. Amanda’s poem, which “resonated for so many reasons,” Shaloni said.

“The first time I walked into George Junior, a lot of the students, and even me, were really scared to share our experiences, things that weren’t necessarily happy stories, but much more complex about our personal histories. I felt that struggle and triumph through personal adversity  was really reflected in the inauguration poem, and I hope that witnesses like Gorman guide our public participation.”