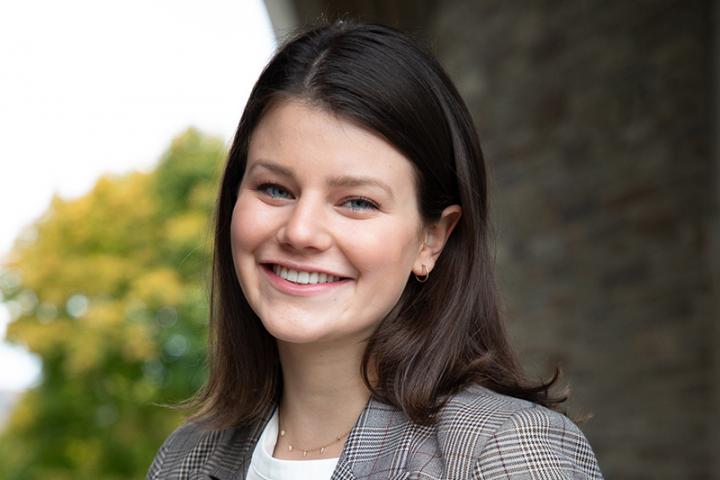 Natalie Lilien ’21 came to the ILR School with a passion for social justice and, in her junior year, took “Autism at Work” with Susanne Bruyère, academic director of the Yang-Tan Institute on Employment and Disability.

“I learned about all of the growing efforts to include autistic individuals in the workplace and to improve workplace outcomes for autistic people. It's a group of people that is extremely underemployed, but also a group of individuals that have so many strengths and deserve meaningful employment like anyone else.”

Despite the work of autistic activists and academics, however, stereotypes about autistic individuals dominate academic discourse. These inaccuracies then trickle down into the opinions of the general allistic (non-autistic) population, and may impact hiring decisions. “There's a stereotype that most autistic people are cisgender, heterosexual boys. And there's just not a lot of room for any diversity in that stereotype, which creates barriers to employment,” Lilien said.

Natalie is exploring this issue through her senior honors thesis research, which examines the neuroqueer identity in the workplace, which means identifying as both queer and neurodivergent. The senior, who notes that she is an allistic researcher – “allistic” meaning not autistic, makes participant-shaped narratives central to the structure of her thesis. Through hour-long Zoom calls, Natalie has been interviewing neurodiverse participants who identify as queer about their experiences in the workplace, including their search for employment, the interview process, how their social identities have affected these experiences and how their managers and colleagues could best support them at work.

“It’s been really, really interesting and incredible.” There is limited literature on the workplace experiences of neuroqueer individuals and often the research that does exist about autistic people is through the voice of neurotypical researchers, denying autistic people ownership of their narratives, she said. She has learned from and been inspired by neurodiverse pioneers and researchers in the field, including Lydia X.Z. Brown, Noah Adams, Bridget Liang and Laura Kate Dale.

“A central part of my research is making participants feel as if they have ownership over their narratives and ownership over the outcome of the study,” Natalie said. “When the transcript is finished, I send it to them, and they can approve it or deny it. And they get to choose their pseudonym, or if they want to use their first name,” she said. “A lot of participants have expressed to me that it feels good to feel heard about workplace experiences.”

Natalie responded to a few questions about her ILR experiences:

ILR has given me the confidence to think outside of the box and not be afraid to share my ideas. I think that there is such a collaborative culture and the professors are so open to learning from students that I felt really empowered throughout my time at ILR.

I have learned so much about inclusion and perspective-taking in my time at ILR. In any setting, whether it's a club’s e-board, or my work experiences in human resources, I have been able to make a lot of positive changes in small ways that I wouldn't have thought to make if I hadn’t taken ILR classes.

Also, because of my thesis work, Professor Bruyère, who is my adviser, decided to include a chapter on intersectionality in her next book on neurodiversity. I’m really excited that my professor is including this in her book that is going to be read by so many people and researchers. Being able to make a tangible impact like this is just really, really exciting.

I think that, in general, there's just a movement to make spaces more accepting and more welcoming to people with all different identities. So, I think that ILR’s mission is going to change. There are a lot of classes that are already doing a really good job addressing intersectionality, but I think that it is a huge area in which ILR can grow as an institution and teach students about. Workplaces need to foster inclusion so that people can be comfortable being themselves at work.

This story was edited to correct unclear language. The previous version inaccurately implied that the autistic community is not accepting of its LGBT+ members. The opinion of the writer of this piece, and the student profiled, is that the general population is not always accepting of LGBT+ autistic individuals.