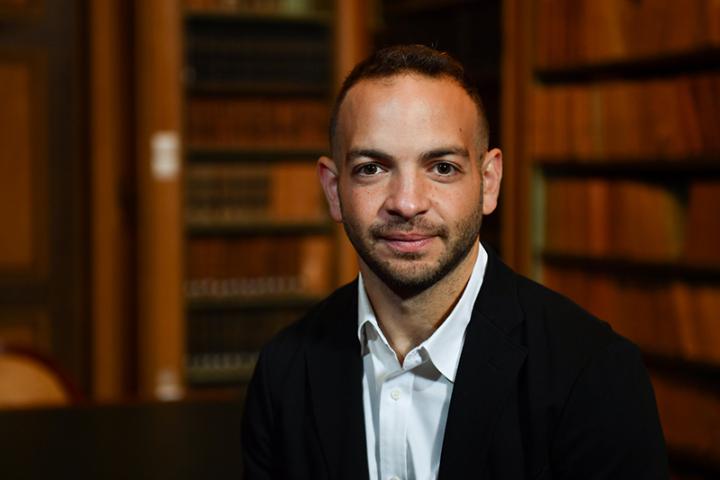 In his book, “Always Day One, How The Tech Titans Plan To Stay On Top Forever,” author Alex Kantrowitz ’09 takes his readers inside Apple, Amazon, Facebook, Google and Microsoft and details how they have developed cultures of invention that have led to their successes.

“Working as a reporter in Silicon Valley, I watched Amazon, Apple, Google, Facebook and Microsoft grow stronger as they grew larger,” Kantrowitz said. “Companies typically become bureaucratic and unimaginative as they get bigger, so I was curious about why the tech giants didn’t follow the pattern."

"As an ILR graduate, looking into these companies’ workplace cultures was a natural first step. And, as I dug in, it became clear their cultures and processes — unlike any I’d seen elsewhere — are the key force behind their success. So, I just became obsessed with figuring out what exactly was going on.”

For the book, Kantrowitz conducted 130 interviews with everyone from Mark Zuckerberg to Amazon’s hourly workers to gain insight into how the biggest tech companies prioritize reinvention over tradition and collaboration over ownership.

“It wasn’t easy to set up these interviews,” he said. “I spent lots of time messaging people on LinkedIn, many of whom never responded. But, when people picked up the phone, we really had productive conversations. One of the great things about writing a book is you get to focus on a central question and build on what you learn in each conversation. Eventually, enough people agreed to speak that I was able to write.”

Each chapter focuses on one of the aforementioned companies, while the final chapter imparts lessons the author learned at ILR – both as a student and during a trip to the Ithaca campus last winter.

Kantrowitz and Dyer spoke about the lack of progress in management approaches when it comes to fostering creative thinking in the workplace, while Hyman linked that stagnation to the American educational system where students have been hurt by drilling memorization, repetition, and risk mitigation thorough “a lifetime of training to get the right answer.”

With Litwin and Ajunwa, the conversation focused on how the technology that takes over human work tends to benefit only those who develop it, while artificial intelligence can be useful, but only if it is continually checked for bias, and that any found bias be disclosed to the public.

“I’ll never forget the day I visited a glass bottle factory in my first week at Cornell,” said Kantrowitz. “The ILR administration sent us there during Orientation to teach us about how workers and management interact. And, after seeing molten hot glass shoot through tubes, get blasted with air and turned into beer bottles, we huddled in a breakroom where a factory boss talked to us about bathroom breaks and injuries. I questioned my decision to enroll.

“Later, I realized that the visit was the administration’s way of showing us that everything we know about work today starts in the factory. Things have evolved a bit in the knowledge economy, but largely in reaction to manufacturing. Now, as we enter a new era of work, with technology like AI and automation transforming what we do in the office, I felt it was important to revisit the faculty that taught me that foundational lesson many years ago.”

Read what Kantrowitz had to say in response to three questions about ILR:

ILR taught me how to think. Looking at labor through multiple lenses — law, history, economics, negotiation, human resources — helped me build a 360-degree view of the way the world works. I’m thankful for that education every day.

After finishing ILR, I made my way to San Francisco to report on the tech giants. Once on the ground, I found these companies’ work cultures fascinating, and wrote a book, “Always Day One,” digging into them. Through 130 interviews, I examined the workplace systems that made these companies successful. My hope is that other companies will co-opt the tech giants’ systems and thrive alongside them.

The work world is going through profound transformation now that companies are adopting artificial intelligence, automation, and distributed workplace technology. There’s no institution more capable of explaining these transformations and their implications than ILR.