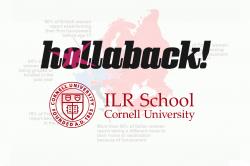 ILR Professor Beth Livingston directed the research and was assisted by Maria Grillo MILR ’15 and Rebecca Paluch M.S./Ph.D. ’18. The Worker Institute’s KC Wagner also played a role in helping convene the partnership with Hollaback! as part of the Equity at Work Initiative.

“Creating a survey to be consistent across multiple countries is a complicated undertaking, but it provides an amazing opportunity to understand street harassment cross-culturally,” said Livingston.

The survey was conducted between October and December 2014. It was translated into English, Spanish, French, Italian, Dutch, Bosnian, Croatian, Hindi, Polish, Nepali, Marathi and German.

There were more than 16,600 respondents, making this survey the largest analysis of street harassment to date. The findings of the survey were alarming. Here are some notable statistics from the survey:

“We hear stories of street harassment every day and, even so, this data shocked us,” said Hollaback! Deputy Director Debjani Roy. “We can no longer dismiss street harassment as a ‘little problem,’ this is everyone’s problem,”

Hollaback! shared this message with its members: “We are so thankful to Cornell researchers for partnering with us to conduct the largest cross-cultural study on street harassment ever. New data like this helps us identify street harassment as the global epidemic that it is and strengthens our movement.”

You can see the full data and presentations focused on 22 countries on the Hollaback! website. Infographic below via Hollaback!