Advance Findings from Report on Sexual Harassment in the Workplace 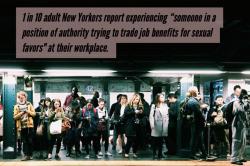 Workplace sexual harassment is widespread across New York state, has a broad impact, and is a problem New Yorkers would like to see their leaders do more to address. These are the findings of a new report from The Worker Institute at Cornell ILR.

Despite the #MeToo movement, many experiences of sexual harassment and violence remain hidden from view. In the world of work, as elsewhere, coming forward remains challenging. Even when survivors report workplace sexual harassment, non-disclosure agreements and other factors can prevent these incidents from seeing the light of day.

To create a broad snapshot of workplace sexual harassment in New York, The Worker Institute added four questions to the Empire State Poll. The Empire State Poll is a general phone survey of adults age 18 and over who are residents of New York state. With 800 respondents, the margin of error for the survey is ± 3.5 percentage points at a 95% confidence level. Data collection for the 2018 Empire State Poll occurred between February 1, 2018, and April 1, 2018.

Below are the main findings from our descriptive analysis of the 2018 Empire State Poll. The Worker Institute will release a full report within the month.

You can read the full list of advance findings here.

Sign up here to be notified of the release of the full report:https://bit.ly/2SNZnwN