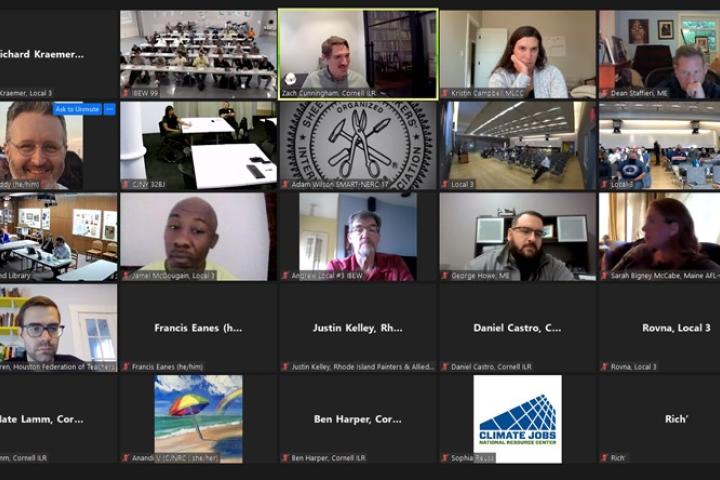 On September 22nd, Cornell's Labor Leading on Climate team facilitated a training session for union members in four states as part of the Climate Jobs Summit and Week of Action. The training - planned in conjunction with the Climate Jobs National Resource Center, Climate Jobs New York, Climate Jobs Illinois, Climate Jobs Rhode Island, and the Maine Labor Climate Council - was the first of its kind during the annual Summit, bringing together over 100 rank-and-file union members and leaders to learn about the actions their unions can take to combat the climate crisis.

LLC Extension Associate Zach Cunningham facilitated the training virtually from New York City, while participants in New York, Illinois, and Rhode Island gathered in person for viewing sessions.  More than a dozen union members from Maine also joined virtually. Participants spent 90 minutes discussing the climate crisis and why it matters to working people and their families.  They also reflected on how the climate crisis impacts them every day. This included both teachers and construction workers sharing how rising temperatures make it more difficult for them to do their jobs.

While participants wrestled with the difficulties climate change poses in their communities and their workplaces, they also discussed the ways unions can grow their membership and lead the fight for healthier, more sustainable communities. Justin Kelly, Business Representative for the Rhode Island Painters & Allied Trades, Local 195 of District Council 11, discussed his union’s work on the Block Island wind project, the first operating offshore wind farm in the country. John Sigren, a social studies teacher in Houston, Texas, shared how schools can play a leading role in fighting climate change while also creating better learning conditions for students.

Finally, organizers from partnering state-based climate jobs coalitions also joined in order to share more about what’s happening in their particular states. The final 15 minutes of the training was set aside for people to gather with others in their communities and hear about different ways they can get involved.  In several locations, participants lingered after the training officially ended to continue these important discussions.

Coming out of this training, LLC and state coalitions plan to continue working together to spread this message further and create training modules more tailored to specific union locals and states.  Overall, this was a successful inaugural attempt to spread the messages from the Climate Jobs Summit to a broader cross-section of the labor movement, hopefully sparking action in every corner of the country.