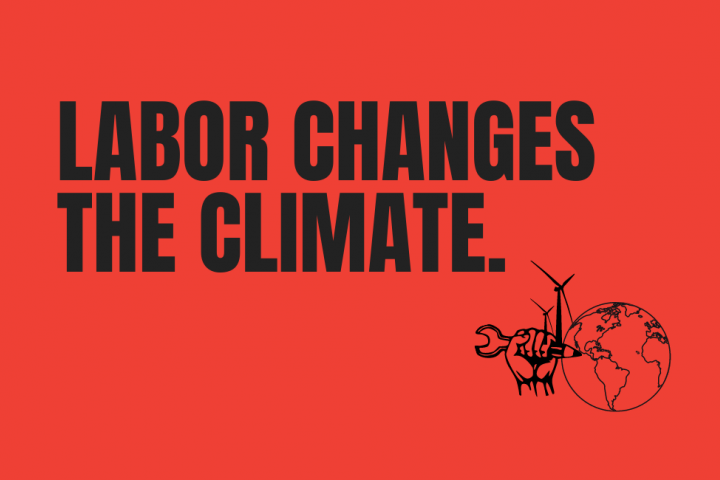 This year is proving to be an important one for those who work at the intersection of climate justice and workers’ rights. Carbon emissions have reached a record high, and risks continue to increase for vulnerable workers. After years of hard work from organizers and activists, more people than ever view these issues as linked. Even the President of the United States frequently discusses the transition to a green economy as an opportunity for workers, through high-quality, union job creation.

In the past year, this has proven to be more than just a narrative shift. With the help of the Climate Jobs National Resource Center, activists in several states are pushing legislators to expand the renewable energy sector and create community-sustaining jobs. As federal legislators continue to debate the PRO Act and the Biden Administration’s American Jobs Plan proposal, we would like to highlight some of the critical state-level efforts in New York, Connecticut, Maine, and Illinois. 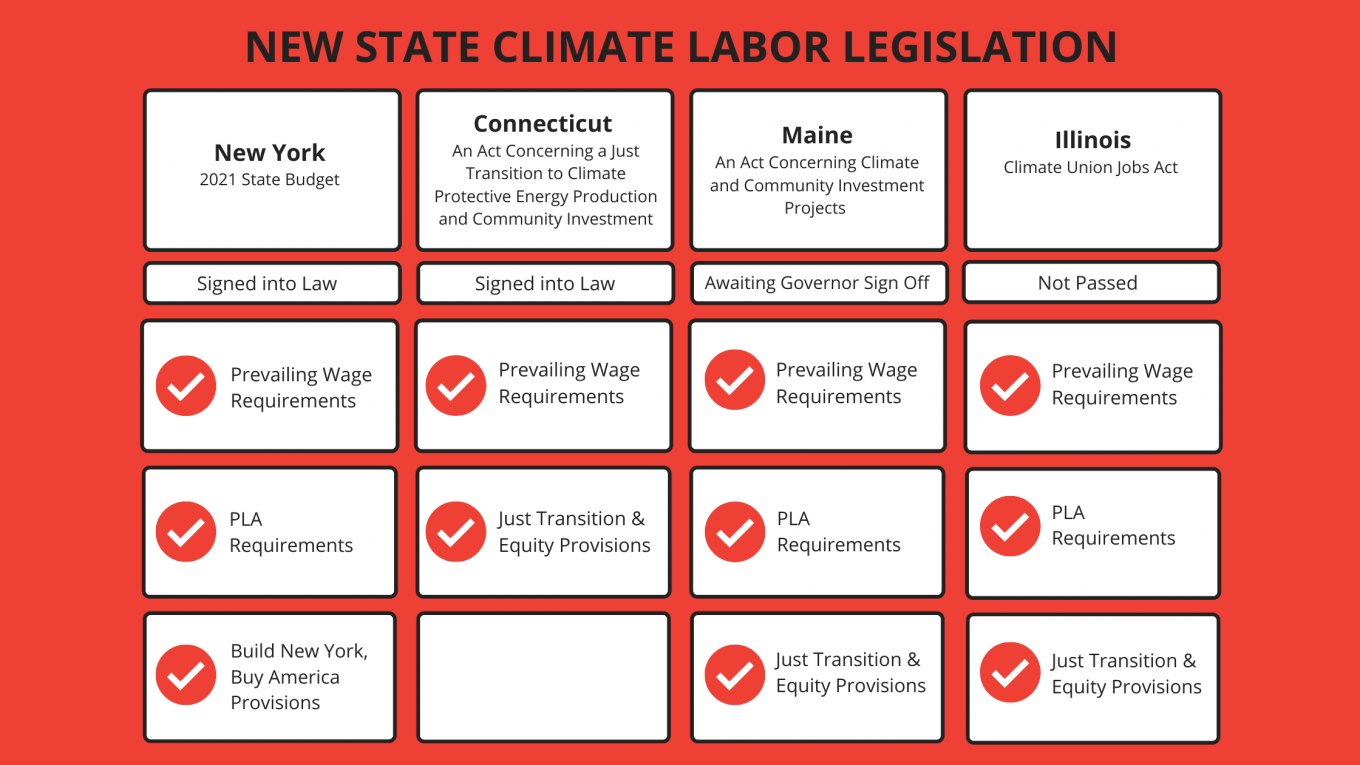 Following Hurricane Sandy, the Worker Institute at Cornell University convened several unions to discuss labor’s role in fighting the climate crisis. This led to the creation of Climate Jobs New York (CJNY), a coalition that has pushed for bold climate action and strong labor standards.

New York State set some of the most ambitious climate targets in the country in 2019’s Climate Act. The Climate Act codifies New York’s goal to meet 70 percent of its energy needs with renewable sources by 2030 and reduce greenhouse gas emissions 85 percent by 2050. Work is already underway on five offshore wind projects, which will get New York halfway to its goal of 9,000MW of offshore wind production by 2035.

Meeting these climate goals will create thousands of jobs, and the state’s labor movement - including CJNY - has fought hard to make sure these jobs are high-quality. In the latest state budget, lawmakers required prevailing wage and project labor requirements for all construction work on renewable energy projects that are 5 megawatts or larger. It also requires labor peace agreements on operations and maintenance work for these projects, making it easier for workers to come together and form a union. Further, several unions have stressed the importance of building a domestic supply chain for this work. As such, the budget emphasizes purchasing American steel and iron products and incentivizes manufacturing of equipment in New York State.

A newly-created Office of Renewable Energy Siting could also help catalyze high-quality job creation. The office aims to expedite the siting and construction of renewable energy projects, promoting more job growth and delivering environmentally-responsible, cost-effective energy to local communities.This path would bring New York State closer to reaching its ambitious renewable energy targets. This office - the first of its kind in the nation - will also create a fund to ensure renewable energy projects do not increase risk to endangered and threatened species, and it requires that projects have a net conservation benefit.

Across the state line from New York, organizers, labor leaders, and environmental groups have joined forces in Connecticut to advocate for some of the most inclusive prevailing wage and project labor agreement requirements in the nation. Driven largely by the Connecticut Roundtable on Climate and Jobs - a coalition of labor, community, and environmental groups - the Connecticut legislature passed “An Act Concerning a Just Transition to Climate-Protective Energy Production and Community Investment” in early June, with Governor Ned Lamont signing it into law on June 14.

Under this act, the developers of any renewable energy project in Connecticut with a nameplate capacity of at least 2 megawatts must provide construction workers, maintenance and security employees with prevailing wages and fringe benefits. This applies to publicly and privately funded projects, excluding offshore wind developments.The act does not apply to work covered by Project Labor Agreements, which will likely go above and beyond the prevailing wage.

Developers must also ensure that all contractors and subcontractors meet certain requirements, including the proper legal classification of all workers. Construction employers frequently skirt taxes, wage and hour laws by misclassifying workers. This impacts vulnerable workers most, such as undocumented immigrants who are often underpaid and misclassified as “independent contractors.”

Additionally, if a Connecticut renewable project is 5 megawatts or more, developers must “take all necessary actions” to develop a Community Benefits Agreement and a workforce development plan. These Community Benefits Agreements will allow community organizations a seat at the table, offer local residents an opportunity to see real improvements, and pressure companies to mitigate any negative externalities that may come along with development. Workforce Development Plans will utilize apprenticeship and pre-apprenticeship programs to develop workers’ skills and offer pathways into careers in the trades.

In recent years, the Maine AFL-CIO has prioritized climate action. The state is on the verge of enacting a law very similar to Connecticut’s. Their legislation, “An Act Concerning Climate and Community Investment Projects,” would cover all renewable energy projects of 5 megawatts or more that receive at least $50,000 in economic assistance from the state. This law strengthens licensing requirements for electricians and mandates contractor participation in a registered apprenticeship program for each trade, ensuring a skilled workforce.

Like Connecticut, Maine contractors and subcontractors would be required to pay prevailing wages and benefits unless a Project Labor Agreement covers the work.  However, unlike Connecticut, where PLA’s are not mandatory, Maine’s legislation would require a PLA for all projects of 50 megawatts or larger.

There are also many community benefits included in the law. First, contractors must administer a workforce development program, which includes skill development for employees from disadvantaged communities. Additionally, there are incentives for employers to hire women, people from BIPOC communities, and veterans.

As of June 2021, the bill has passed both houses of the Maine legislature and is awaiting Governor Janet Mills’ signature. If the bill becomes law, it will be in large part because of sustained organizing by unions, environmentalists, and community members alike.

In Illinois, a coalition of labor unions known as Climate Jobs Illinois is advocating for the Climate Union Jobs Act. The proposal includes labor provisions broadly similar to those found in Connecticut and Maine, such as prevailing wages and Project Labor Agreements for covered projects. If passed, developers for subsidized projects, along with their contractors and subcontractors, must remain neutral in a union drive and agree to “card check” recognition for employees seeking to unionize. “Card check” bypasses the often-cumbersome election process under the National Labor Relations Board, which employers frequently use to delay and stymie organizing efforts amongst employees.

The Climate Union Jobs Act also sets clear climate targets, saying,“The State must transition to a clean energy future and put itself on a path toward 100% clean energy by 2030.” It does this in part by allocating resources to struggling nuclear plants, which are heavily unionized and included under the bill’s definition of clean energy. Additionally, it employs various tax credits to help spur the development and procurement of renewable energy sources and aims to electrify large numbers of private vehicles and public transportation buses.

Perhaps most expansive is the bill’s ambitious goals for public schools. The legislation sets a goal for public schools to be powered by clean energy by 2030, with “space heat, water heat, and transportation” coming by 2050. This Carbon Free Schools Initiative would help install a total of 2,500 megawatts of solar power on thousands of public schools and provide tens of millions of dollars to convert school buses from gasoline to electric.

At the moment, the fate of Illinois’ bill is uncertain. There are several competing climate bills in the legislature, and lawmakers did not agree on a package during their regular legislative session. Legislators could push a bill during a special session, but questions linger about the proper amount of money for nuclear facilities and the fate of two coal plants. Should lawmakers and Governor JB Pritzker reach a deal, it could have a major impact on climate and labor work moving forward?

All of the above examples were made possible due to sustained organizing from communities on the ground. This work shows no signs of slowing down, as coalitions continue building in states around the country. The energy driving state legislative efforts remind us just how urgent this moment is.

But as climate risks continue to worsen, it becomes more and more clear that the federal government must step up and play its part. Only federal legislation - combined with international action - can adequately push us towards net-zero emissions while protecting and empowering the working class.

Organizers can - and should - continue pushing for policy change at the state level, but the atmosphere is a global commons. We need the federal government to set the bar on labor protection as we work towards a green transition. We also need to make sure that any infrastructure package passed by Congress has climate labor measures front-and-center.

The future of net-zero will be built by the hands of working people, but it cannot be built on their backs. The federal government should be paying attention to state successes and devising ways to scale up the best practices that achieve climate goals and a quality standard of living for all.