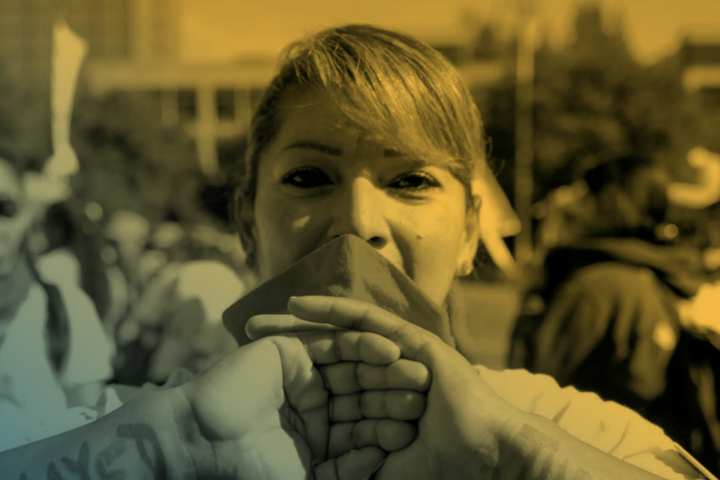 New York, NY -- Today, the Worker Institute at Cornell ILR released a new report that documents experiences of workplace sexual harassment in the California janitorial industry, as well as the conditions that hinder reporting and impose silence. The report also highlights an innovative response developed by SEIU-USWW, the Maintenance Cooperation Trust Fund, and other allies, examining a worker- and survivor-led peer education model that has been institutionalized through statewide legislation.

“Who said that a janitor can’t be a teacher? This is what employers say because they want to continue taking advantage of workers,” said Veronica Lagunas, a janitor promotora who is a professional peer to peer advocate and co-founder of SEIU-USWW’s Ya Basta Center.

“Sweeping Change: Building Survivor and Worker Leadership to Confront Sexual Harassment in the Janitorial Industry,” is based on participatory research conducted by the Worker Institute at Cornell that included surveys of more than 700 janitorial workers; focus groups with 35 workers; a survey of 36 janitors who are promotoras (peer educators) and compadres (male allies); and in-depth interviews with four worker leaders. In addition to showing that experiences of sexual harassment and assault are widespread among this workforce, analysis of the resulting data indicates that:

The research points to the value of a peer education model in confronting the problem of sexual violence within this context. The report also draws broader lessons for taking on the problem of workplace sexual harassment and violence in other contexts.

"The Sweeping Change report offers a glimpse into the prevalence of sexual violence in the janitorial industry,” said Denise Velasco, Strategic Initiatives Director at the Maintenance Cooperation Trust Fund. “As non-unionized janitor advocates, our focus is to bring violating employers to justice in order to ensure safe and just workplaces for all janitors.  We view the report as an important step forward in recognizing the impact survivors and allies have had in disrupting a culture of abuse within the industry."

“This is another example of women of color leading the way in creating legal and cultural changes that benefit everyone, and advancing frameworks that address multiple forms of oppression and silencing,” said KC Wagner, Director of the Equity at Work initiative at the Worker Institute at Cornell ILR. “The promotoras show us what’s possible when those most affected by sexual harassment and violence and other harms are at the center of informing strategies for change.”

About the Worker Institute at Cornell ILR

The Worker Institute at Cornell ILR works to advance workers rights and collective representation through research, education, and training in conjunction with labor and social justice movements. We seek innovative solutions to problems faced by working people in our workplaces and economy today.

About Futures Without Violence

For more than 30 years, FUTURES has been providing groundbreaking programs, policies, and campaigns that empower individuals and organizations working to end violence against women and children around the world. Providing leadership from offices in San Francisco, Washington D.C. and Boston, we’ve established a state-of-the-art Center for Leadership and Action in the Presidio of San Francisco to foster ongoing dialogue about gender-based violence and child abuse.

The Maintenance Cooperation Trust Fund (MCTF) is a California statewide watchdog organization that works to abolish illegal and unfair business practices in the janitorial industry. Working with enforcement agencies, the MCTF drives the process of enforcing the law to expose the unfair advantage law breakers gain over their law-abiding competitors. Over the years, the MCTF has been effective in exposing systemic unfair business practices, such as wage theft, and other criminal behaviors that destabilize industries and violate workers’ rights.