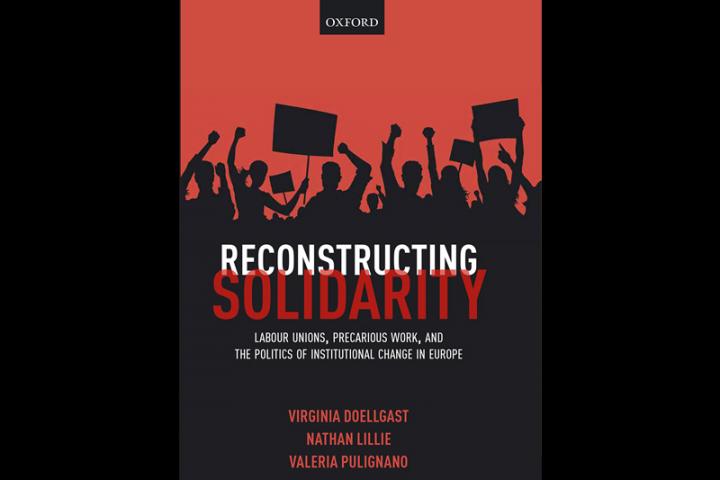 Are labor unions the answer to improving conditions for low-wage and “precarious” workers? If so, how would unions accomplish that goal in today’s labor environment in the United States and Europe?

Those are among the questions examined in a book co-edited by ILR Associate Professor of Comparative Employment Relations Virginia Doellgast.

“Reconstructing Solidarity: Labour Unions, Precarious Work, and the Politics of Institutional Change in Europe” was published in January by Oxford University Press.

The book shows that unions across Europe are experimenting with creative campaigning and organizing strategies to try to improve conditions for precarious workers in industries ranging from retail and local government to metalworking and meatpacking. They succeed where they are able to both build strong solidarity among different groups of workers and enforce high labor standards at industry and national level applying to all workers. The book, at 288 pages, also examines the social and political shift toward populism.

The book provides a framework for those seeking to understand why precarious, exploitative work is expanding worldwide; as well as the possibilities for reversing its growth. Its multidisciplinary approach includes economics and labor relations, as well as sociology and political science. It suggests that collective action will be required to bring about changes in the welfare state and the labor climate worldwide to improve equality and social justice.

“Work is widely thought to have become more precarious. Many people feel that unions represent the interests of protected workers in good jobs at the expense of workers with insecure employment, low pay, and less generous benefits. Reconstructing Solidarity: Labour Unions, Precarious Work, and the Politics of Institutional Change in Europe argues the opposite: that unions try to represent precarious workers using a variety of creative campaigning and organizing tactics.”

“Where unions can limit employers’ ability to ‘exit’ labour market institutions and collective agreements, and build solidarity across different groups of workers, this results in a virtuous circle, establishing union control over the labour market. Where they fail to do so, it sets in motion a vicious circle of expanding precarity based on institutional evasion by employers. Reconstructing Solidarity examines how unions build, or fail to build, inclusive worker solidarity to challenge this vicious circle and to re-regulate increasingly precarious jobs. Comparative case studies from fourteen European countries describe the struggles of workers and unions in industries such as local government, retail, music, metalworking, chemicals, meat packing, and logistics. Their findings argue against the thesis that unions act primarily to protect labour market insiders at the expense of outsiders, while showing the conditions under which more broadly inclusive union campaigns can succeed.”