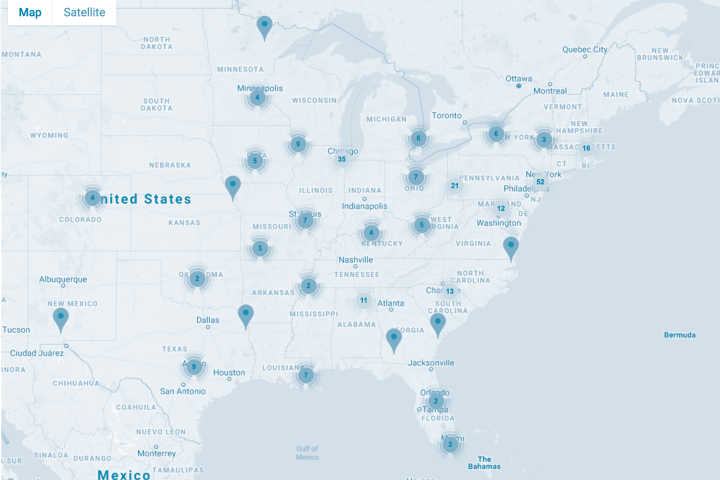 2021 was a dramatic year for the US labor movement, with an upsurge in strike activity that gained extensive media attention. In light of ongoing speculation about the scope of these actions, we are particularly pleased to release the first ILR Labor Action Tracker Annual Report, which presents key findings from our data on work stoppages in 2021. We have created a comprehensive database of strikes across the United States because official data sources only record a small fraction of this activity. Since funding cuts by the Reagan administration in the early-1980s, the Bureau of Labor Statistics (BLS) only documents very large work stoppages - those involving 1,000 or more workers that last at least an entire shift. As this report demonstrates, only recording very large work stoppages excludes the vast majority of strike activity and leaves practitioners, policymakers, and scholars misinformed about the true level of workplace conflict. Strikes remain an important source of labor activism (and may be increasing in salience), as workers collectively stop work to address a range of demands, including, but not limited to, pay, health and safety, and racial justice. In this report, we follow the lead of the BLS and document work stoppages, which include both strikes and lockouts. You can follow our project and view our monthly reports of strike activity on Twitter @ILRLaborAction.

This report is based on data we collected on strikes and lockouts in 2021. Detailed information on our project’s methodology can be found here. Further details specific to the methodology for this report can be found throughout this document. We generate all of our data on strikes from a number of public sources, including existing work stoppage databases, news articles, and social media posts. We follow rigorous verification protocols to ensure that a strike did in fact occur and to collect data on a number of related variables, including, but not limited to, the size, duration, industry, and demands of a strike. We link to the sources used to generate data on each strike on our site’s interactive map. We also collect data on labor protests, but only provide summaries of work stoppages in this report because our count of protests is less comprehensive. In light of our rigorous protocols, we may underestimate the total amount of work stoppages as we cannot include events that do not have adequate verifiable information.

A special thanks goes to the Cornell ILR School for funding our project and the entire ILR Labor Action research team for putting in the hours to document strike activity. We thank the staff at Cornell ILR’s Worker Institute, who have continued to support and promote our project since our public launch in May 2021. We would also like to thank David Yantorno and Betsy Wiggers of ILR’s marketing team, Mary Catt of ILR’s communications team, and David DeMello of ILR’s web development team for their excellent design and promotion of our report.

In 2021, approximately 140,000 workers were involved in 260 strikes plus five lockdowns, for a total of 3,269,186 total strike days. Work stoppages increased steadily throughout the year and reached peak numbers in October and November.

Manufacturing and educational services accounted for the majority of total work stoppages: 17.7% each. Workers in the health care and social assistance industry comprised over half of all workers involved in stoppages in 2021, due mostly to two large one-day sympathy strikes in California. Workers in manufacturing had the largest number of strike days, at 35.8% of all strike days combined. 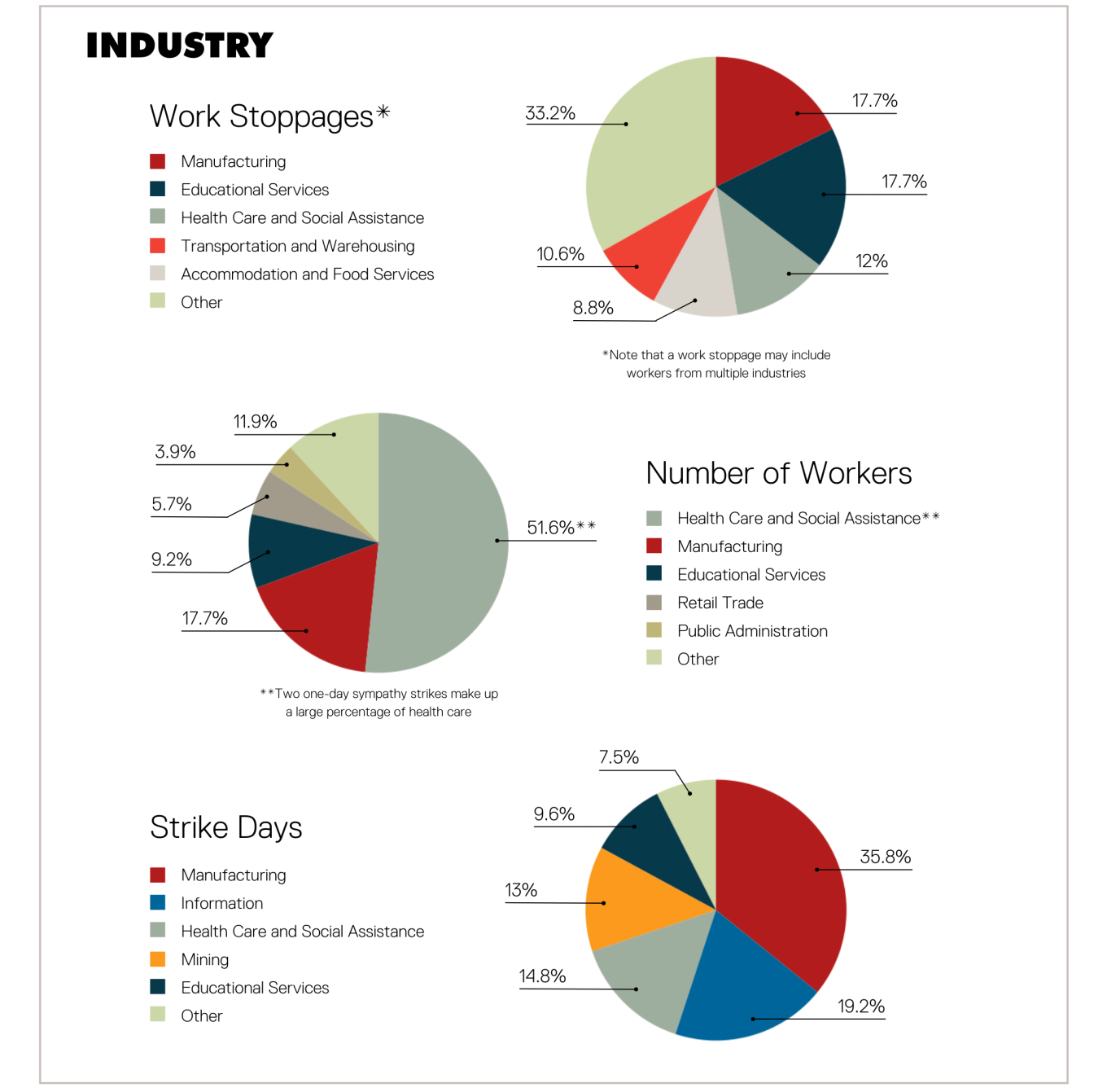 A slight majority of work stoppages in 2021 lasted four days or less. These relatively short strikes included the majority of workers. Although involving a smaller total number of workers, strikes longer than a month accounted for the overwhelming majority of total strike days. 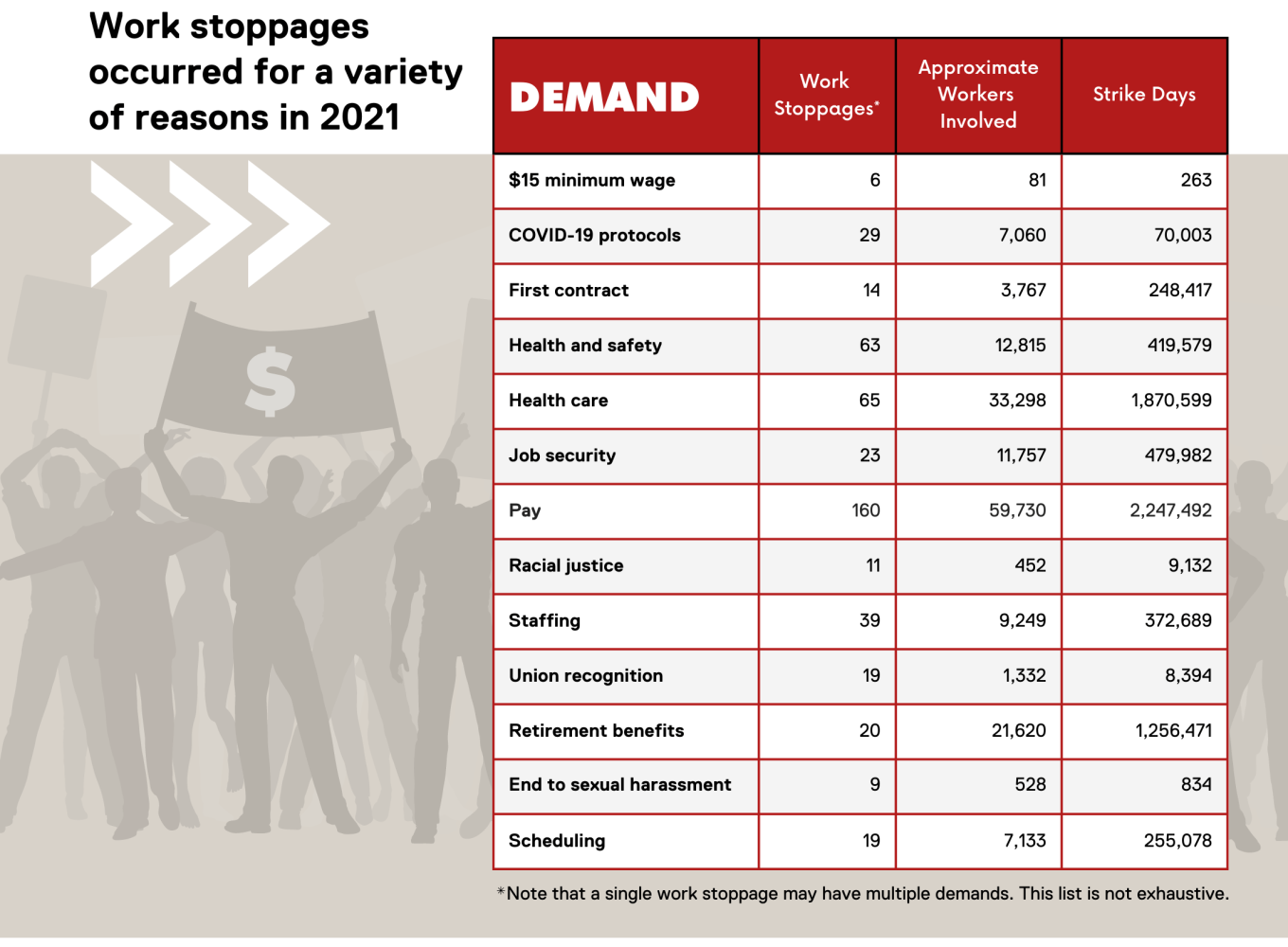 82.7% of all unionized strikes* were authorized by a union, compared to 11% that were unauthorized and 6.4% with unknown authorization status. Authorized strikes comprised an even higher percentage of approximate number of workers and strike days, accounting for 94.5% and 98.2% respectively.

Work stoppages were nearly evenly distributed across the West, South, and Northeast, with the number in the Midwest falling slightly behind. The approximate number of workers involved in work stoppages in the West far outpaced the other three regions, largely due to the two very large one-day sympathy strikes in California. The greatest number of strike days were in the Northeast and the fewest were in the West. 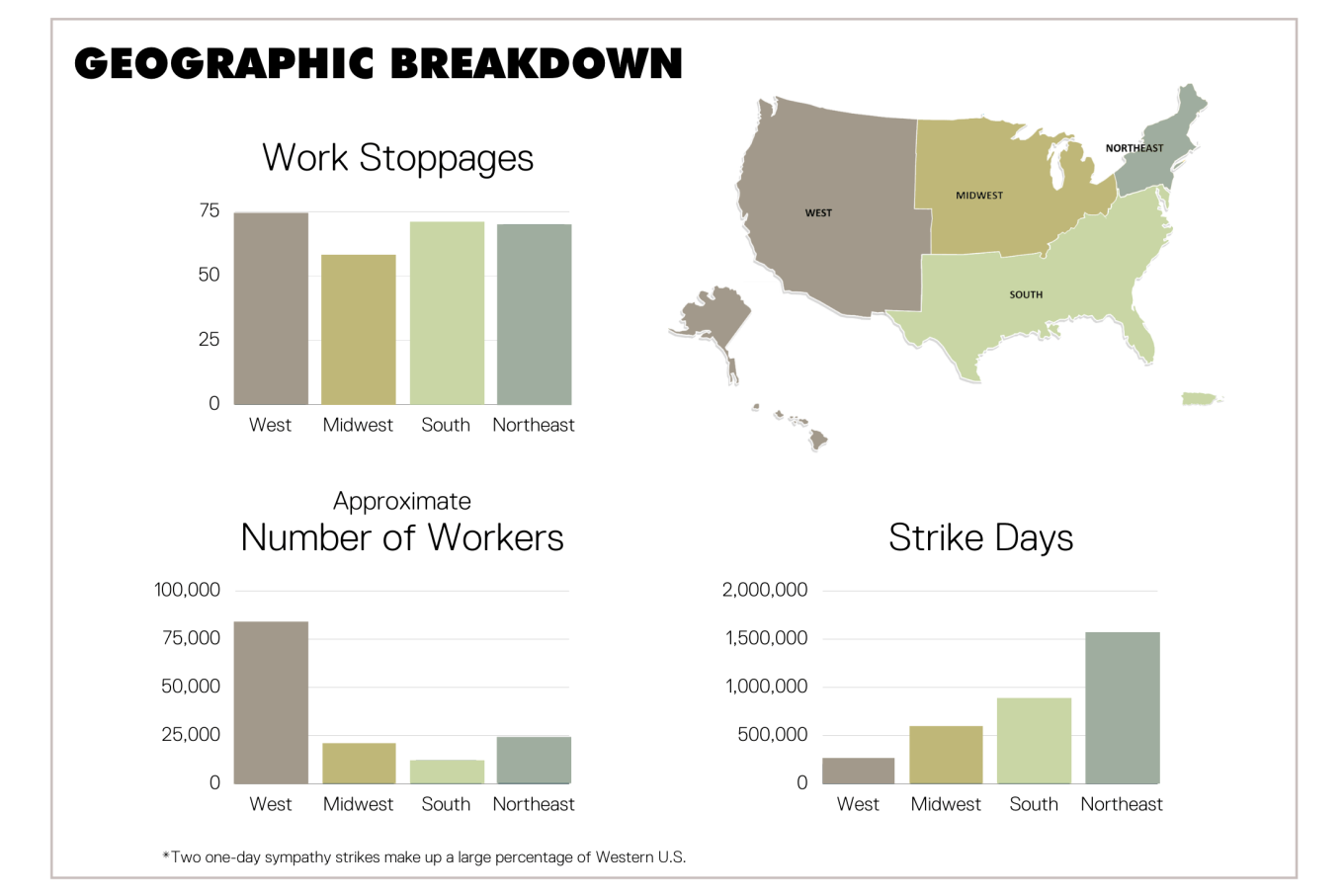 NOTE: A single work stoppage may appear in multiple months.

NOTES: A work stoppage may include workers from multiple industries.
Two one-day sympathy strikes make up a large percentage of health care stoppages.

NOTE: Research gathered data on the number of workers involved in work stoppages for 238 out of 265 actions equals 90 percent.

NOTE: A single work stoppage may have multiple demands. This list is not exhaustive.

NOTE: By unionized, we mean after formal recognition of a union.

NOTE: This only includes strikes by unionized workers. By unionized, we mean after formal recognition of a union.