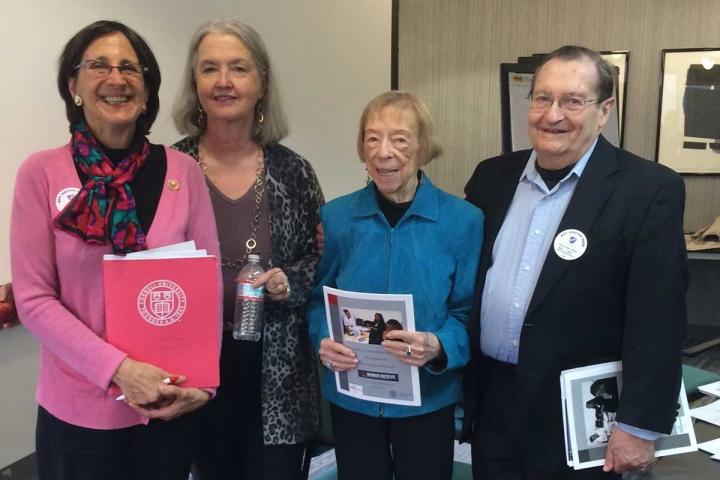 Authored by Lois Gray and Maria Figueroa of the Worker Institute, "Women's Committees in Worker Organizations: Still Making a Difference" is the newest in a series of collaborations between the ILR School and the Berger-Marks Foundation.

Over the past nine years, the Berger-Marks Foundation has awarded five research grants to the ILR School's labor programs, now housed within the Worker Institute.

The foundation has also funded programs -- led by Kate Bronfenbrenner and Sally Alvarez -- focused on organizing and labor education for union women, and has provided scholarships for young women and women from non-traditional worker organizations to attend the Union Women's Summer School.

The foundation is unique in its focus on women and unions according to Gray, the Jean McKelvey/Alice Grant Professor of Labor Management Relations Emeritus at the Worker Institute. "Through the foundation's financial grants, we have been able to expand our research on women's leadership and organizing and provide educational opportunities to union women."

In honor of Edna Berger, the first female lead organizer for The Newspaper Guild-CWA, and through the bequest of her husband, songwriter Gerald Marks, the foundation was established to promote women's engagement in unions and worker organizations.

Louise Walsh MS '81, foundation chair, said, "I started the Edna Berger Scholarship Fund to honor Edna's life; I asked Carolyn Jacobson to be secretary-treasurer and Linda Foley, former president of the Newspaper Guild, to be the first president."

Walsh attended ILR as a graduate student after working for United Press International and the Washington Post and becoming an active member of The Newspaper Guild. "My ILR education built on my labor and news background and opened doors."

Connections from her master's program at the ILR School led to several jobs and teaching opportunities, including the AFL-CIO's Department of Professional Employees headed by Jack Golodner ILR '53, the George Meany Center for Labor Studies, the ILR School, and the AFL-CIO's Solidarity Center. Attending the ILR School, Walsh said, led to a rewarding life, "It seems everywhere I turn I meet more ILR graduates."

Berger-Marks Foundation Secretary-Treasurer Carolyn Jacobson '72 was awarded the ILR School's prestigious Groat Award in 1996 as a distinguished alumnus. Jacobson is a current member of the President's Council of Cornell Women (PCCW).

As a student at ILR, she interned with Lois Gray in the New York City office and conducted research for the study "Barriers to Participation of Women in Unions." This opportunity ignited her lifelong passion for working with union women to overcome leadership and activism barriers, Jacobson said. "That purpose became my life's work at the Bakery and Confectionary Workers Union, the Coalition of Labor Union Women and Berger-Marks."

Reflecting on this path, Jacobson said "what is especially gratifying is having gone full circle with Lois -- from her selecting me as an intern more than 40 years ago to me being able to support Lois' research on women's committees."

Is There a Women's Way of Organizing

No Holds Barred: The Intensification of Employer Opposition to Organizing