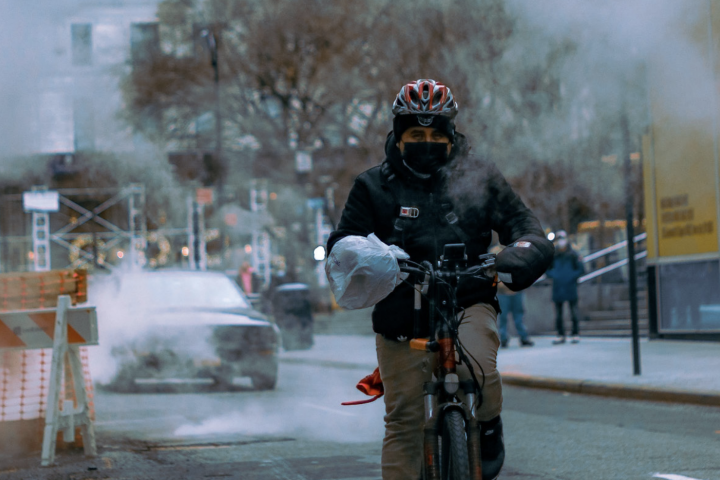 The report involved both primary and secondary research, including a survey of 500 app-based couriers doing deliveries in NYC, focus groups with workers, and individual interviews.[1] The goals of this research are to raise awareness among stakeholders about the pressing issues that app-based delivery workers face in the largely unregulated platform economy and to help inform policy and organizational solutions to such issues.

“New York City’s food delivery workers risk their lives to bring hot, fresh meals to the doors of thousands every day. This report reveals the harrowing world these workers live in. They face danger everywhere – on the busy streets, in constant exposure to health threats, through low wages that trap their families in poverty, and through discrimination and unfair treatment by many ‘employers,’ restaurant owners and customers. This report is a starting place for desperately needed reform,” said Ileen A. DeVault, Academic Director, The Worker Institute at Cornell ILR.

The experience of app-based food couriers in New York City illustrates the challenges that workers and advocates confront for achieving labor protections in the digital platform economy. Like all workers in the gig-economy, platform workers fall in gray areas or outright gaps of existing legal frameworks, such that their employment status and relationship with the platforms remain unregulated.

The survey results revealed that the already precarious work conditions of food couriers only worsened during the pandemic, including issues of under-payment or non-payment of base pay and tips. Around forty-two percent of workers who participated in the WJP-Cornell study reported experiencing non-payment or underpayment.

The survey also found that for delivery workers, the workplace comprises the city streets, the restaurants where they pick up food, customers’ front doors, and building lobbies and elevators. Although delivery workers are considered essential workers, they lack basic safeguards and sanitary conditions at work. Forty-nine percent of survey respondents reported having been in an accident or crash while doing a delivery. Of these workers, 75 percent said that they had paid for the medical care with their own personal funds.

The most serious danger that delivery workers confront is becoming victims of violent assault when their electric bikes are stolen. This widespread issue also worsened during the pandemic. Fifty four percent of the WJP-Cornell survey participants reported having experienced bike theft, and about 30 percent of these said that they were physically assaulted during the robbery.

To read the full report and the complete findings please click here.

[1] This report was funded by the Workers’ Justice Project, with additional support from Cornell University’s ILR School and that State of New York. The views, opinions, findings, and conclusions and recommendations expressed in this report are those of the authors, solely, and do not represent those of either Cornell University or the State of New York. We especially thank the workers and leaders who participated in this project through surveys, focus groups, and interviews.

The report would not have been possible without the assistance from the Worker Institute Undergraduate Research Fellows programs and the students from that program, Rocio Chanez and Stella Linardi. Especial thanks go to CUNY Law School Professor Jason Parkin and his students Iris Gonzalez, Daniela Peña, Ignacia Lolas Ojeda, and Miguel Morales, who contributed with the research on the legal framework and protections offered to independent contractors in New York City. We are grateful to James Parrott and Lina Moe of The New School Center for New York City Affairs for feedback on an earlier version of this report. Especial thanks to Cornell ILR Professor Ileen DeVault for her feedback on our final draft.