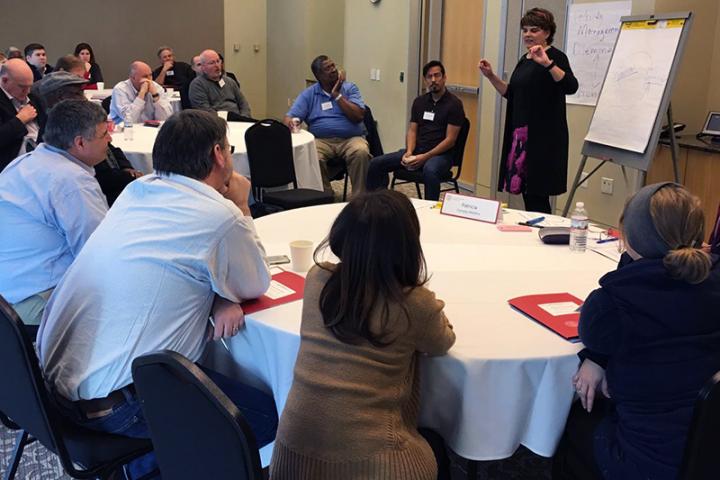 These are challenging times for labor and other pro-worker movements. And, the answer to not just surviving, but thriving, is to learn from each other.

That’s the aim of the National Labor Leadership Initiative, a cooperative effort between The Worker Institute at Cornell University’s ILR School, other labor programs at universities around the United States and the AFL-CIO.

Launched in 2013, the program’s effect is called transformational, remarkable and life changing by its participants, who come from unions and worker organizations around the United States and Canada.

“I’ve never had an experience that was so rich, that caused me to look into myself, to understand the journey I’ve taken as a trade unionist and to really think about relationships,” said John Cartwright, president of the Toronto & York Region Labour Council, in Ontario, Canada. The working class around the world needs to face tough questions. “We need a deep ability to analyze the reality to come up with the right answers.”

That’s done by learning to listen well, to be humble enough to let others sometimes lead and to be brave enough to take risks, said Shawna Bader-Blau, executive director of the Solidarity Center, a U.S.-based, AFL-CIO allied worker rights organization that aids workers in 68 countries.

That way, “you can change the world if you want to,” said Jackie Jeter, president of the Amalgamated Transit Union Local 689, in Maryland.

In the South, where organizing can face particular challenges, the initiative has helped leaders learn to communicate better, to “drill down and see what the problems are,” said Ed Navarro, south regional director of the International Union of Bricklayers and Allied Craftworkers. Lessons from NLLI helped the union sign up some large contractors in Nashville, Tenn.

The world is changing in profound ways, and “NLLI creates a space for deep conversations,” observed Matt Schlobohm, executive director of the Maine AFL-CIO.

From Washington State to Texas to Massachusetts, institute brings together not just labor unions, but worker centers and other organizations, including Jobs for Justice and the National Guestworker Alliance, offering a broad perspective, participants said. it gives leaders the confidence and the networking support to have tough conversations.

“I’m very comfortable now having conversations that make people uncomfortable, and I firmly believe that the only thing that’s more difficult than having those conversations is not having them,” said Gerald Swanke, national vice president for the American Federation of Government Workers.