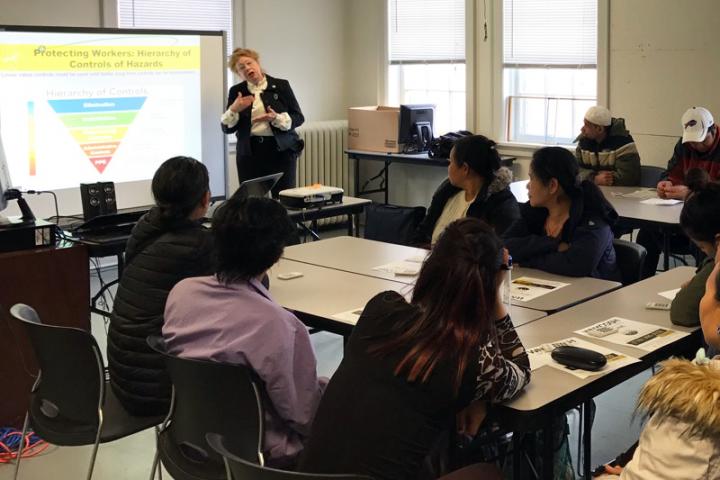 Refugees and other immigrants sometimes have language and other barriers that limit them from knowing how to avoid hazards at the workplace, but people like ILR’s Nellie Brown help change that.

Brown conducts health and safety training for immigrants working or seeking jobs in the restaurant, hotel, textiles, warehouse, nail salon and other industries.

She presents the training in English with consecutive translation into several languages, including Somali, Swahili, Arabic, Nepalese, Burmese, and Karen, an  Indo-Tibetan language spoken in the southeast divisions of Myanmar.

“I can’t help feeling very passionately about the work I’m doing,” said Brown, a certified industrial hygienist and director of the Workplace Health and Safety Program, a statewide program of Cornell’s Worker Institute.

She has been working for three decades with the Western New York Council on Occupational Safety and Health, a nonprofit devoted to improving working conditions for all workers, and their Worker Center, which focuses on outreach and organizing immigrant and refugee workers.

Brown conducts almost 150 workshops a year. In March, she conducted hazard training organized and coordinated by the council through a state job training grant, offered for the first time this year.

She also is training nail salon workers about state ventilation regulations that took effect in October. In western New York, the regulations primarily impact Vietnamese workers. “We’re the first state to do this,” Brown said. She makes sure workers know they must use respirators, instead of surgical masks, which won’t protect them.

She trains anywhere from a few people at a time to 40, she said.

When there’s translation into several languages involved, workshops take longer and are intense, Brown said. Workshops are designed to include audience participation, so that programs will be more interesting for those being trained.

Brown also leads workshops for companies and for government.

She has worked with Monroe County to train construction workers in proper lead renovation, a course taught by fellow Worker Institute colleague Arthur Wheaton. In that case, renovation of older houses and apartments has been shown to reduce levels of lead poisoning in children, she said.

She has also helped set up workplace health and safety committees, and has worked closely with unions.