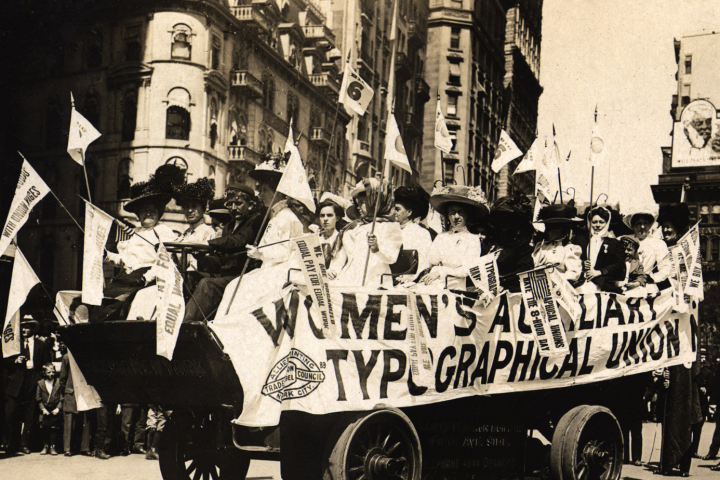 Although many participants were attending the week-long school for the first time, some of the school's long-standing supporters also attended.

In an interview, they discussed the summer school's history and the importance of cultivating women leaders in the labor movement. Their quotes are preceded by the first letters of their first and last names.

What is your history of involvement with the Summer School for Union Women?

LG: Both Rochelle and I were on the Cornell faculty when this began. The initiator was our colleague, Barbara Wertheimer, who had started the Trade Union Women's Studies. She wrote a book that was funded by the Ford Foundation, in which she analyzed the barriers of women's participation to unions.

RS: Barbara led Cornell's Institute for Women and Work. She was a professor and (Cornell) Extension specialist. Barbara's main purpose in that book was interviewing women workers (including Ida), to determine why women weren't participating (in the labor movement). Besides the obvious time constraints, the women told her that they did not feel confident taking part in the union because they didn't have any information about the union, they'd never been mentored like the men.

IT: Many of the women were in the union but at the steward level.

AT: What they (women in Barbara's book) came down to say was that they didn't know what was going on in the union meetings.

LG: She found that some of the barriers were societal (like the pressure to be homeworkers) and male prejudice but the one she thought that she could address by forming the women's summer school, was the women's lack of self-confidence and their lack of knowledge in the union.

RS: The union world was completely dominated by men.

LG: I recruited Barbara to the faculty when I was the metropolitan director for ILR. I was in a position to back her recommendations and implement them. Rochelle was working directly with Barbara and became the head of the Trade Union Women's Studies.

RS: And this program put into practice what Barbara had learned in her survey. The subjects would help them in leadership development, including public speaking and writing, as well as collective bargaining. It was a wildly successful program. The women really bonded together. There was a study done 10 years after the program began, and the women said that the program changed their life, not only in their union, but in their whole life. Many women went back to school, changed their marriage, et cetera. It was quite extraordinary, and so was Barbara Wertheimer.

IT: I felt very good that there would be a women's summer school and in my union, we had a male leader who was amenable to that. We came to the first school in Connecticut and the postal workers were the worker group that really dominated the group; their (male) leader participated. It was an opportunity for women union members to talk to one another outside of the earshot of men. We could complain, gripe, however you want to put it, about our situation. We found that we were in similar positions of inferiority, in all of the unions.

AT: These were not rank and file women, they were union staff.

RS: Women union staff met over brown-bag lunches because that was the only time they had to talk to one another.

LG: Barbara wanted to make us a national movement, rather than just something Cornell would do here in the East. I was able to help her, because I was elected president of the University and College Labor Education Association (that would have allowed this to become national). There was very strong male opposition – why should we have a separate program for women, et cetera. I was able to help her to get approval from the University and College of Labor Education Association. Ida and Adrienne were very key union leaders that helped get the program started.

AT: I was a staffer at the Communication Workers of America, which gave me the freedom to seriously deal with issues of leadership development. Incidentally, I was a student in the Trade Union Women's Studies program.

RS: Yes, we all found each other. I found Ida in the brown-bag lunches. Ida, to me, was the most open, honest, caring person. In Trade Union Women's Studies, Adrienne didn't really have to go there to learn, but went there to connect.

IT: Retail, Wholesale and Department Store was my union.

RS: Ida represented the people who were in Bloomingdale's.

IT: I taught in the first program (the first Connecticut school).

RS: The southern school had started, and Barbara needed someone to lead that one. The school had about 60 women with more women from industry than in the Northeast school. The Northeast school had more public employees. The Alabama women had much less access to any kind of education, so they were very needy.

IT: I think one of the things that made this school different, was that the women attendees were part of the planning for the next school. It was joining academics and union in discussions.

AT: Barbara thought it was really important that this mix of academics and union practitioners was real. We labored over the instructors. We wanted to show diversity in front of the student body – that academics and union women really could work together, both in the planning and their teaching. These are women that are totally committed.

LG: I should mention that Sally Alvarez and I did a follow-up study of women who had attended the school. We found an overwhelming percentage of them had actually taken on more responsibility in their organizations – in their unions and in their communities. They felt that the schools had really given them the confidence to do that.

LG: The things that would change are the issues, the kinds of issues discussed. The curriculum consists of the basic leadership skills program and a number of workshops. Since issues and practices in unions have changed, there are different topics, particularly for the workshops. Also, our general sessions that deal with big public issues – for example, immigration and global trends – those have changed.

RS: Technology has also changed a bit. Instead of having print paper, we now have a blog.

LG: The students used to be up all night before graduation, getting their newsletter together. Now, technology has caught up with the school, and the school has caught up with technology. The core subjects, though, have always been about what women need mentally (to become leaders). The workshops tend to be more innovative and current. There are many of the same things – ¬¬planning meetings, and evaluations about what students needed and what they liked. These are things we will always do. The very first planning meeting every year is to look at student and instructor evaluations of the schools.

IT: We also have more professional women attending, such as teachers and nurses.

RS: It has become extremely important to us that we're looking to recruit younger women. It has been 38 years, and the way to keep it continuing is to look for younger people.

LG: The student body in this school reflects the changing composition of the labor unions themselves, and the labor leaders have only grown older in the older establishments. What we've been doing is that we're reaching out to some of these newly formed unions, like the National Day Laborers, the Retail Action Project and the Domestic Workers Union. Those are made up of very young people, and increasingly run by young women. The traditional unions are still run by men, but in the new groups, it's mostly women coming up.

AT: The other thing you have to look at is the local unions, not the larger bodies. Who are they hiring, who are they recruiting, who is that leadership sending to these schools? That's where you have to do a heavy dose of recruitment.

Why is it important to have separate schools for women leaders?

AT: We don't really need a man to say, "You can do this." We need to say this to women as women. The very makeup of this dual teaching (union women and academics) was meant to show women that they can, in fact, do. They need the image, and we give them that.

LG: If we go back to Barbara Wertheimer … She observed that there were very few women in these (leadership) classes (at union schools). To answer your question, it's because women have been underrepresented in leadership, and opportunities to receive training. Women account for 41percent of union membership and the AFSCME is the one union that gets close to that percentage in women leaders. In other, older unions the density of women in leadership is close to zero percent.

RS: We wanted to get the women together to change that.