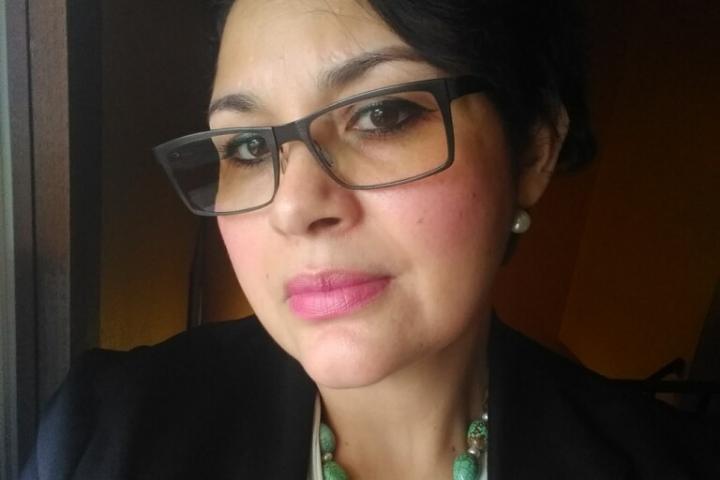 Sandra Seibert is an employee of Smithfield Foods at a pork plant in Sioux Falls, South Dakota. She is a Covid-19 survivor and has addressed her concerns about workplace safety with company representatives and elected leaders. Originally from Honduras, she is a mother of three who has worked in the meatpacking industry for 15 years. She is a union steward for the United Food and Commercial Workers (UFCW).

Johnnie Kallas: How long have you worked in your field?

Sandra Seibert: I worked in the meat field for 15 years. I work in different positions, but I have worked in ham bone for 14 years.

J: Do you have an official position within UFCW?

S: I am a union steward.

J: How big is the plant that you work at?

J: Could you briefly describe the nature of your work on a daily basis?

J: So have they done anything to help you all?

S: They put a bottle of sanitizer when you come in the door. That’s the only thing I’ve seen in the department. I emailed human resources in early-April at Smithfield: why is there no sanitizer in the break-room? They don’t provide too much help for us. When they started doing something it was too late. On April 6th they started putting cardboards on tables in break rooms and some tables outside for people to eat. Anybody could cough or sneeze when you are eating. I got sick on April 7th. On April 8th they put plexiglass on the tables. It was too late because there were 300 people already sick. They didn’t help us in the beginning. I told my supervisor when I heard about the first person and asked why they don’t close the plant and do a deep clean? He said it was a good idea but they didn’t do anything.

My family is okay and I am the only one who got sick in my family.

I talked to one person who said he got sick on April 16th or 18th. He got sick about three days later after he was at work. More people then got sick. Everywhere.

J: I am glad you and your family are now okay. Smithfield’s only response to everyone getting sick was to put hand sanitizer out and some glass?

S: They put hand sanitizer only when you come in the door.

J: Have there been other changes since mid-April? Have they closed the plant to deep clean?

S: When they saw the numbers going up to 400 600, Smithfield said they would close Saturday to Monday to clean up. They never did it because my department is working ten hours on Saturday. In one department they work eight hours. So it’s not really closed for three days. It’s really open.

J: Were you forced to come into work when you were sick or were you given any time off?

S: There are people who don’t understand the language. They put it on a board with information, they don’t give real information to people with health issues.

J: So what have you and the union tried to do in response?

S: When all these people are sick, they don’t give us any masks or anything. I emailed the company to get us help. I emailed the governor to ask for help. They just ignored us.

J: What’s going on in the plant right now?

S: They closed the plant for almost three weeks now. And we have quarantined for two weeks. The plant is closed. They said they are doing a deep clean. Now the company has a plan for people to get tested for Covid-19 at the high school. It’s voluntary, they don’t force you. I don’t understand that if you have the people to get tested for Covid-19 but if you have 250 people still working inside the plant. It doesn’t make sense.

They are not running, but the mechanics are working inside. It doesn’t make sense to test people outside but to have people still inside the plant working. They don’t force you to get tested, it’s voluntary. There are people who have gotten tested who have the virus but don’t have the symptoms.

J: Yes, heard many workers are asymptomatic like in Missouri meat packing plant.

S: Yes, they could have no symptoms and still spread the virus to everybody.

J: What needs to happen for you to feel safe to go back to work?

J: Do you have any response to what Trump said about meat plants remaining open?

S: Yeah, I emailed the White House too. When they said they would open the plant. We need to go back to work safely. Not only safe for us but for our families and safe for the whole city. If you don’t give us the right equipment, I don’t feel safe.