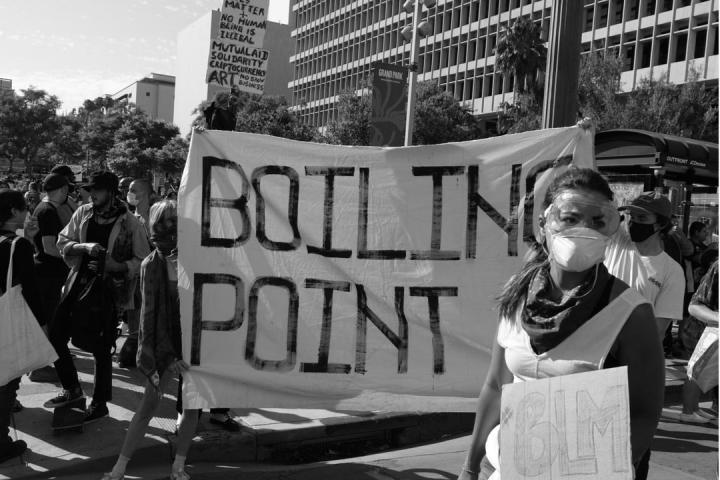 The murder of George Floyd may have been the event that sparks a long-overdue racial intervention for many whites in the United States. Some may object to the metaphor of an intervention, but those of us who have supported loved ones through struggles with addictions of various sorts will probably notice some painful parallels in the current racial moment. There’s the classic denial when confronted with their addiction: What are you talking about? I don’t have a problem. “They” have the problem. There’s also no small amount of anger: You’re telling ME that I have a problem? You don’t know anything about me! You know what?: I’m through talking about this. And of course, possibly most disturbing of all, is normalizing the problem: Why all this fuss anyhow? It’s just a few bad apples. People are making a big deal over nothing.

But White America does have a problem: a systemic racism problem. This problem has been around since the near genocides that constructed this nation of ours and the effects of that problem on the lives of people of color in the United States, especially black Americans, has been profound. Routine harassment, brutality, and extrajudicial killings at the hands of law enforcement have been the worst-kept secret in communities of color since the days of slave patrols. The only difference is that now a small number of these crimes have been filmed and viewed en masse, lending credence to the uncomfortable truth that the majority of white Americans have previously denied or minimized. Some white Americans were shocked to learn that, according to figures from a May 30th, 2020 National Public Radio report, black and Latinx Americans are often between twice and four times more likely to contract and between two and three times more likely to die from COVID-19. People of color understood they would be at greater risk during this pandemic even before preliminary statistics because the coronavirus is merely one node of a host of health and wellness inequalities that disproportionately affect communities of color at every socioeconomic level. And the current economic downturn is simply one more indignity to impair the financial fortunes of many people of color in the United States. For black families, in particular, the outlook for intergenerational mobility has never been particularly good owing to the long and uncorrected legacy of slavery and has trended downward ever since the steady dismantling of job protections and gutting of public-sector unions and the social safety net beginning in the late 1970s.

So, given that this moment is an intervention of sorts, it’s only fitting that we speak directly and honestly about the problem. Fixing our race problem is not the responsibility of people of color because they do not control the levers of social, political, and economic power in this country. The racial hierarchy was set up to enfranchise propertied white men (and later all white men and then later still all white men and women) at the direct expense of non-whites. Thankfully, a growing number of white Americans are coming to terms with this fact. But chanting slogans, sending one-off donations to non-profits and social mission groups, and phone calls and text messages to the black people in your life, while certainly a momentary feel-good act, is simply not enough to fix the problem any more than the promises an addict makes to their loved ones is enough to compel sober living. We need long-term sobriety from the majority of white Americans and without a serious commitment to sobriety, the United States may very well be lost entirely to its addiction to racism.

In the immediate moment, two things are necessary from white Americans who want to help the United States get clean. First, talk less and listen more. Remember, this is an intervention and an intervention only works if the addict earnestly hears and then understands exactly how their addiction has affected the lives of their loved ones. If you’re serious about starting to repair the harms of racism, you have to start with open ears, mind, and heart and not an open mouth. Second, you must realize that racism thrives on violence and poverty. The United States has exceptionally high rates of violence when you consider our relative wealth and this is entirely due to the fact that violence has long been used in this country to secure the wealth of the few at the direct expense of the life, liberty, and pursuit of happiness of the many. Let me be absolutely clear: you cannot repair the injuries of racism while the largest number of those victimized by racism are forcibly denied the resources necessary to lead a life with dignity.

Perhaps the greatest silver lining is that our national intervention to correct the violence of racism and poverty comes at an exceedingly propitious moment. One might be forgiven for forgetting that there is a Federal election this fall due to the extraordinary set of circumstances that have befallen the country to start the year. But to refocus solely on the horse-race nature typical of US presidential elections would be missing the point entirely. This truly is the year of The People. Ordinary citizens have proven that they don’t need leaders to take direct action, first in dealing with the fallout from the coronavirus pandemic and then in taking a loud and decisive stand against systemic racism and brutality within policing. I call on every American of conscience to stand up once more and make 2020 the year that we fully commit to eradicating poverty on the long march towards eradicating racism. Although there are many things to be done to truly eliminate poverty, two political actions are paramount.

First, alleviating poverty must be at the center of every major political initiative going forward. For too long, politicians have pandered to middle-class whites while enacting anti-black, anti-immigrant, and anti-poor policies that have reallocated public goods to the wealthy and increased the number of working poor of all races. Over the same period, politicians, judges, and many white voters have ceded extraordinary power to law enforcement to use state-sanctioned violence to both occupy poor and working-class communities of color and strip various rights of citizenship (most notably the right to vote) from poor and working-class black and brown Americans despite plummeting crime rates across the majority of the United States. We must fully reject these forms of violence and any government fiscal or social policy that does not prioritize rebuilding our social safety net to reverse a decades-long downward mobility trend. This means increasing affordable housing, fully funding nutritional support programs like National School Lunch Program and the Sustained Nutritional Assistance Program, expanding Medicaid for all who want it, and eliminating the profit-incentive that drives the prison industrial complex. These are all initiatives that have sound empirical evidence to show that they work to decrease poverty when funded at sufficient levels.

Finally, and most importantly, ordinary citizens must empower themselves and each other to put their words into actions and keep the focus on eliminating both racism and poverty. Our political system has proven that it has been thoroughly compromised by money from corporate and wealthy individual interests and only conscientious citizens can repair it. While the size of the task at hand may seem daunting, it is really a matter of making small changes on the way to larger fundamental changes down the line. The old adage to “Think Global, Act Local” applies well here. Everyone who has benefitted in some way from our social system, broken though it may be, must now commit themselves to engaging in local politics, whether it be running for election, regularly attending school board or town halls, petitioning to eliminate racist and/or anti-poor policies, or (hopefully) all three. The point is to both lead by example and also make sure that national and local politicians know that they’re being closely watched. Much in the same way that the police accountability movement has forcefully advocated for direct and independent oversight of police departments and boards, oversight is fundamental to both hold people accountable for their actions and make sure that no one succumbs to the temptation to elevate their own interests over the public good. This is a dark yet hopeful moment in the United States. The citizens of this country must stand up and hold those in power to honor the ideals of liberty and justice so often espoused in our collective mythology. We must not squander this moment to finally break our national addiction to systemic racism and poverty.