A Call for Radical Labor Solidarity with the #BlackLivesMatter Movement 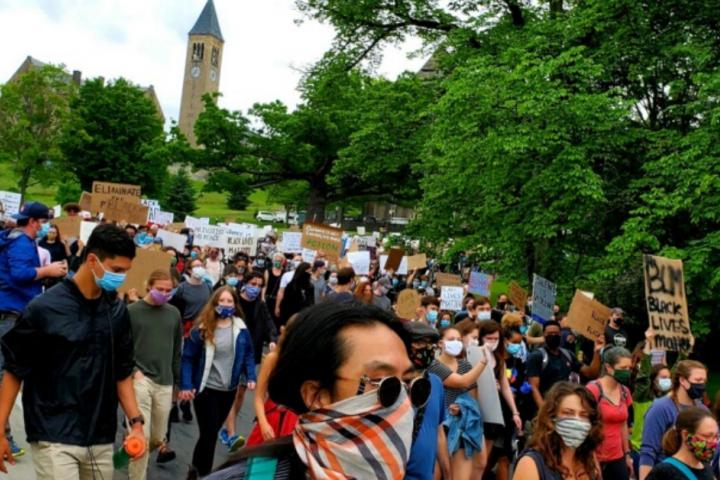 We write as labor scholars to denounce racial injustice and call for radical labor solidarity with the #BlackLivesMatter movement and all movements for racial justice. We call on our colleagues in the labor movement and in academia to consider what radical inclusive solidarity looks like and to practice this solidarity – in our organizing, teaching, research, and daily lives.

Three recent murders stand out, from a much longer list – most of which go unreported in the news. On February 23, 2020, a white father and son in Georgia chased then shot a 25-year old African American man, Ahmaud Arbery, while he was jogging. Police did not arrest the known shooters and accessory for six weeks. On March 13, 2020, Louisville Metro Police officers barged in with a no-knock warrant and shot a 26-year old African American woman, Breonna Taylor, in her own home, with 20 rounds of bullets. Prosecutors charged Taylor’s boyfriend, a registered gun owner, with attempted murder for firing a shot at a police officer’s leg. The officers have not been terminated or charged. And on May 25, 2020, for nearly 9 minutes a Minneapolis police officer and three of his fellow officers held a Black man down in a knee-to-neck maneuver after a store employee alleged he used a counterfeit $20 bill. While George Floyd pleaded to breathe and called out for his mother, and as concerned bystanders begged for his life, other police officers stood by and did nothing—not even rendering aid after Floyd became unresponsive.

The current pandemic of racialized violence, unlike COVID-19, is not novel. It reflects a long history of white supremacy, anti-blackness, and inequality in the United States. This history is embedded in our institutions, organizations, and daily life. It enables a racialized notion of meritocracy that results in pay discrepancies and limited job and promotion opportunities for racial minorities. It is a by-product of a drug war that seeks to justify deadly no-knock warrants and excessive use of force. And it is rooted in a culture that allows a police officer—with a record of complaints about brutality against racial minorities—to snuff out the life of an unarmed Black man in full view of the public. These killings have ignited protests across the country that President Trump now seeks to quell with militarized police force.

We denounce these killings and other forms of violence and injustice, both immediate and systemic, against Black people. These injustices include the white woman in NYC’s Central Park falsely accusing a Black man of threatening her, using a 911 call as a potentially deadly menace. It includes the white woman harassing a Black woman merely for sitting in a public park that she had presumed was not in the Black woman’s neighborhood. The invention of cameras on mobile phones has brought the current spate of racism to the forefront, and we acknowledge the many incidences of racism that are not filmed and largely go unreported and unprosecuted.

What role can labor activists and scholars play in advancing racial justice?

For racial justice to become central to labor solidarity, we must be willing to engage in a deep and ongoing inquiry into anti-Black racism in the workplace and labor institutions. This includes denouncing and critically examining where employers and worker movements fall short, as well as promoting the positive examples of radical labor solidarity.

We must acknowledge that racism is embedded in the very fabric of labor-capital relations. Historically, employers and the state have viewed working-class solidarity as the most dangerous element they have had to contend with and have responded to it with force. In the United States, a racial hierarchy which puts Black people on the bottom and which rewards proximity to whiteness has been deployed to undermine the solidarity of working people. Fomenting racial divisions in the workplace and in working-class communities has long been one of capital’s most important tactics to keep labor divided and disorganized.

We must acknowledge that racism is central to U.S. labor history which includes short bursts of inclusive solidarity followed by a retreat into more exclusive (whiter) alliances. The militant Congress of Industrial Organizations fought for racial equality from the mid-1930s as part of its strategy for class unity. Several major unions, nevertheless, abandoned this strategy during the anti-communist, cold-war hysteria of the 1950s. The AFL-CIO also failed to back the civil rights and anti-war actions of the sixties. By the early 1970s, racism and xenophobia divided a declining U.S. trade union movement.

We must also acknowledge that contemporary police unions have contributed to racism. Solidarity within police unions has been turned toward opposing reforms demanded by movements for greater transparency, including opposition to civilian review boards and placement of names and badge numbers on uniforms. A study by Campaign Zero found that police union contracts create ‘legal and structural barriers to accountability, transparency, and fairness.’ These barriers include limits on disciplinary consequences for officers and failure to record information on past misconduct investigations in an officer’s file. Indeed, just last week a group of justice-oriented organizations, officials, and academics called for the AFL-CIO to disassociate from the International Union of Police Associations and other law enforcement affiliates. They argue, “The AFL-CIO cannot stand for criminal justice reform, while at the same time allowing police unions to use [their] power to impede reform.”

While we must continue to expose the many forms of anti-Black racism, we must also lift up examples when labor fights for the needs of all people in meaningful coalitions with racial justice movements. During the March on Washington for Jobs and Freedom on August 28, 1963, A. Phillip Randolph, head of the Brotherhood of Sleeping Car Porters, joined forces with Walter Reuther, President of the United Automobile Workers, among other radical union leaders, to advance Martin Luther King Jr.’s fight for civil rights. In some respects, the March on Washington stands as a remarkable moment of solidarity in which almost a quarter-million people came together to demand racial and economic justice for all Americans.

Currently, there is a growing movement among trade unions, worker organizations, and spontaneous worker movements to recognize racial justice as central to the struggle for economic and social justice. It is significant that most major unions have released statements demanding justice for George Floyd, including SEIU, the United Steelworkers, the CWA, and the UAW.

These unions and their members have been participating in the recent demonstrations and marches. Their tactics and strategies have been as varied as the labor movement itself. The most widely publicized solidarity action was by the Amalgamated Transit Union (ATU), representing Minneapolis bus drivers. The union-backed up bus drivers who refused to transport police and arrested protesters. The Facebook group ‘Union Members for #JusticeForGeorgeFloyd’ gathered signatures from union workers, aiming to strengthen its coalitions with Black Lives Matter. Labor solidarity is also evident in union efforts to disseminate political education to its members and their communities. Individual unions such as CWA are dedicating resources to this end – such as their Runaway Inequality workshops. These efforts connect the profiteering of Wall Street, rampant inequality, and institutional racism to worker-led discussions, bargaining, and political action.

Perhaps most importantly, labor solidarity is practiced through explicitly intersectional worker organizing. This includes, as Tamara Lee puts it, “strategic organizing approaches that center the amplified oppression of the most vulnerable workers,” such as the work of the Restaurant Opportunities Center and the Fight for $15. CWA’s organizing with the Brooklyn Cablevision Workers (the majority of whom are workers of color) also represents an important model, as do labor-community coalitions such as the Bargaining for the Common Good initiative, which have led to racial justice commitments from labor unions such as AFSCME. Yet, the labor movement has much more work to do, especially for the Black struggle, and against racism and police brutality, as one union hotel worker argues.

As labor scholars, we must elevate and expand the work of the unions and worker centers already engaged in these efforts and be willing to hold those who aren’t to account. As educational institutions, we must actively invest in and learn from the new generation of Black, Indigenous, People of Color (BIPOC) labor leaders (both in and beyond traditional labor unions). We must also hire, tenure, and retain labor scholars who acknowledge, examine, and teach the impact of the intersection of race, class, and gender on American political, social, and economic life. This practice must also extend to our editorial boards, our association leadership, our conference panels, our search committees, and our funding portfolios. We must take a hard look at our curriculum, our tenure decisions (and notions of “the canon”). We must hold our universities accountable when they impede racial justice work.

Dismantling racism cannot simply be the work of our BIPOC colleagues, who often take on the invisible labor of mentoring students and junior faculty of color and the disproportional labor of engaging universities to promote what Dafina-Lazarus Stewart calls “transformative efforts to promote equity and justice.” It requires allies to learn when to step up, and when to step back, but overall to “speak up (even) when it’s hard,” on and off-campus, and to hang in for the long haul.