About Violence and Resistance 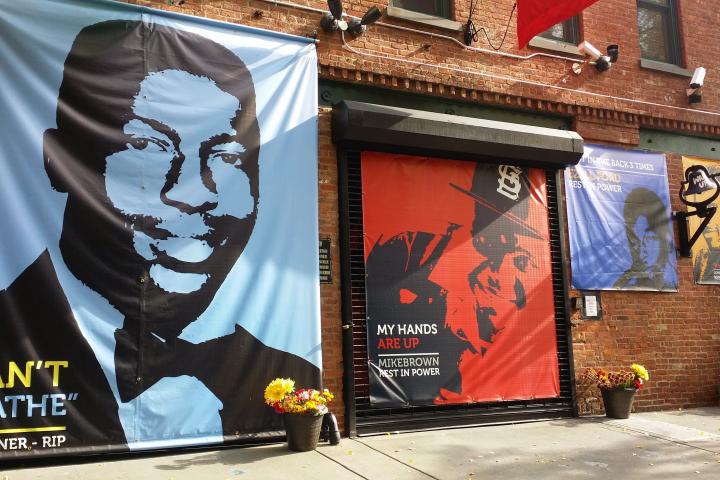 In the wake of the recent horrific killings of George Floyd, Breonna Taylor, and Ahmaud Arbery there has been much discussion of violence: the ongoing patterns of police violence against people of color; the acts of “violence” against property that have occurred during the uprisings against police brutality; and the violent responses by police against protesters.

First, there has been an important public recognition that the ongoing pattern of racist police violence is endemic in the broader reality of systemic racism in the United States. However, there has been less discussion of the violent nature of all aspects of systemic racism, including the violence of the institutionalized racism in the economic system.

Second, many public statements have been made expressing the view that any acts of violence – including against property – undermine the effectiveness of the protests. It would be useful to have further discussion about this question of the tactical use of militant actions.

Third, politicians and the police have used the incidents of “violence” against property as a justification – or any excuse – for imposing curfews and escalating their aggressive violent response to the protests.

We should talk about the meaning of violence in all these contexts.

The violence of systemic racism

Let’s start with the violence of systemic racism by the federal and state governments in the U.S.

From the time of slavery through the present day, racial and economic oppression have gone hand in hand. The State and employers have used race as a tool to keep profits and control in the economic and political elite. It’s the oldest trick in the book. Using racism to divide the working class does double duty. It depresses the wages of workers of color at the lowest rungs of the job ladder and undermines the potential for working class solidarity.

At the same time, the State maintains the deep inequalities of power and wealth of capitalism by refusing to provide for the public health and welfare, instead pointing to “individual responsibility” to gain wages and benefits through the private economy. This is also one of the oldest tricks in the book. Divide the “deserving poor” from the “undeserving poor” – and use gender and race to draw the line between the “deserving” whites in need and the “welfare queens.” The State also maintains systemic inequality by weakening federal laws that protect rights to unionize, thereby undermining the ability of workers to redistribute wealth and power through collective action.

This is the violence of a political and economic system that keeps its knee on the neck of people of color. Here’s just a partial list of what this looks like:

In Frederick Douglass’ immortal words, “Power concedes nothing without a demand. It never did and it never will. Find out just what any people will quietly submit to and you have found out the exact measure of injustice and wrong which will be imposed upon them, and these will continue till they are resisted with either words or blows, or with both.” To demand concessions from the entrenched power of political and economic elites in the U.S. requires broad collective struggle – bringing allies together in a multi-racial coalition of civil rights organizations, labor unions, immigrant rights organizations, prison abolition organizations, and all groups that stand against racism and for social justice.

Collective struggle against systemic racism must be disruptive. We’ve seen the disruption created by the current nation-wide protests against police brutality. Most have been non-violent; some have included violence against property. We’ve also seen a massive outpouring of support from social justice organizations – including strong statements of solidarity from labor unions such as the Communications Workers of America (CWA), the Chicago Teachers Union, and the CUNY Professional Staff Congress (PSC). In a powerful action of solidarity, Transit Workers Union (TWU) bus drivers in Minneapolis and New York City have refused to assist the police in transporting arrested protesters to jail. In NYC, the union’s message was, “TWU Local 100 Bus Operators do not work for the NYPD. We transport the working families of NYC, all TWU Operators should refuse to transport arrested protestors.” With these actions, the TWU has refused to be complicit in police repression of protesters.

It should not be surprising, then, that we’re currently seeing the use of another old trick in the playbook against collective resistance. This is the accusation that “outside agitators” are to blame for disrupting peaceful protests. In its most virulent form, Trump has accused Antifa of being a “domestic terrorist” group that is using the Minneapolis protests for its “extremist leftist” ends. Of course, the irony should not go unnoticed that it was Antifa that physically defended anti-racist demonstrators against neo-Nazis and other white supremacists in Charlottesville.

The attack on “outside agitators” is another divide and conquer tactic long used against labor union and civil rights activists, including Martin Luther King, accusing them of “using” workers as a means to further their leftist agendas. In Minneapolis and other cities, the “outside agitator” accusation is being used to draw a line between the “deserving” peaceful protestors from the “undeserving” disrupters engaged in violence against property.

On closer examination, the evidence has not supported the accusation that “outsiders” were responsible for the property damage in Minneapolis. But that is beside the point. The real question is how to deal with the narrative promoted by politicians, the police, and the media that violence is never justified and that it always undermines the legitimacy of otherwise righteous protests against police brutality. In building a social movement, it is essential to analyze whether and when violent tactics are justified as a response to injustice, including systemic racism. These are difficult choices for organizations to make as they consider a range of factors, including the power of militant tactics to bring attention to an issue and to increase pressure for institutional change. As one Minneapolis activist stated, “What is it going to take to get people to listen? They say, 'don’t incite violence,' but no one is listening. What does it take to get them to listen?”

Organizations must also consider the costs of escalating to use violent tactics, including the potential to alienate allies, distract from their message, and risk retaliation or criminal prosecution. And social justice organizations must deal with the likelihood of infiltration by right-wing provocateurs who push for violent tactics as a way to discredit the movement.    Ultimately, the complex choices about whether to use militant tactics are internal issues for social justice organizations to debate and decide.

“Violence” against property does not provide the police with an excuse or justification to use aggressive anti-riot and militarized actions against protestors, as has been done in Minneapolis, Los Angeles, New York, and other cities. Police in full riot-gear have used rubber bullets, tear gas, batons and other violence against protesters, even targeting the press for attacks. The police have escalated their violent response without even a nod to the reality that the systemic racism and violence of the police were the immediate triggers of the protests.

In a shocking display of brutality to “dominate the streets,” Trump has threatened to send U.S. military forces into the states and has ordered federal troops into Washington, D.C., where mounted officers used tear gas to drive non-violent protesters out of Lafayette Park.

Effective resistance against systemic racism will be disturbing and disruptive. This is inevitable in demanding fundamental change in the distribution of power and wealth in our society. Turning again to the words of Frederick Douglass: “The whole history of the progress of human liberty shows that all concessions yet made to her august claims, have been born of earnest struggle…. If there is no struggle there is no progress. Those who profess to favor freedom and yet depreciate agitation, are men who want crops without plowing up the ground, they want rain without thunder and lightning. They want the ocean without the awful roar of its many waters."