Essential workers need more than a Bill of Rights. They need unions. 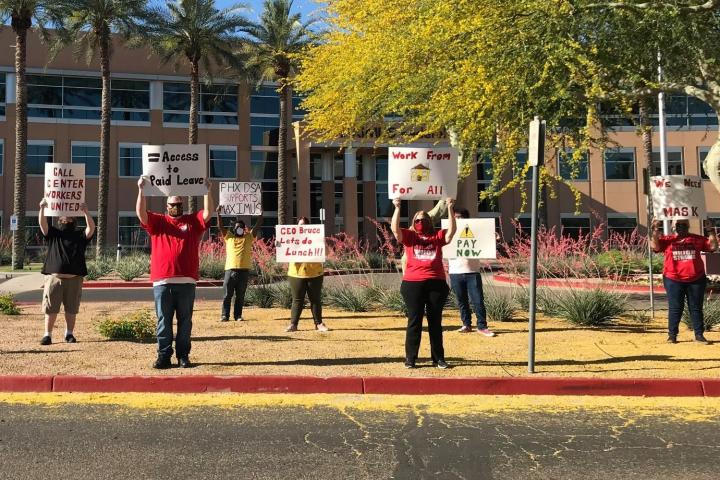 Call centers concentrate large numbers of workers in open-plan offices. They are notorious for low pay and stressful working conditions. It is thus not surprising that they have made headlines as the latest in a long string of service workplaces at high risk for COVID-19 outbreaks. Call center workers at banks, retailers, and large Business Process Outsourcing (BPO) firms have begun to protest employer policies they say are endangering their health, from poor cleaning and cramped conditions to lack of paid sick leave and limited options to work from home.

Unionized call centers have taken a different approach. Verizon, Frontier, AT&T, CenturyLink, and American Airlines all have negotiated agreements with the Communications Workers of America (CWA) that include temporary telework arrangements and emergency paid leave. Workers have the option to work from home, with employer commitments to provide equipment and training. Employees diagnosed with COVID-19 or with underlying health conditions have the right to paid time off. Those facing other obstacles to coming in to work also can take this leave: for example, if they are in states with shelter in place orders or if their children’s schools have been closed.

The CWA negotiated the first of these agreements in mid-March, before worker protests at non-union call centers made headlines. They were able to move so quickly because worker health has long been a central concern of the union and its members. In a study of stress in call centers, my co-authors and I found that union agreements and actions reduced employee burnout connected to aggressive performance monitoring, arbitrary discipline, and fears of outsourcing. This experience gives union representatives a toolkit to tackle the current crisis, and has allowed them to quickly position themselves as experts in ‘best practice’ policies for their industry. At the same time, front-line workers with job security and backing from shop stewards are empowered to identify safety concerns in their workplaces and communicate these to managers.

The recent actions in call centers are part of a larger wave of worker protests and wildcat strikes in service workplaces. These actions have drawn national attention to the reluctance of employers on the frontline of this crisis to invest in basic protective equipment and safety measures. Senator Elizabeth Warren and Representative Ro Khanna recently proposed an ‘Essential Workers Bill of Rights’, which would require employers to put in place policies that look a lot like those in CWA agreements, including universal paid sick leave, employer-provided health and safety protections, and protections for bargaining rights. These kinds of provisions are important for safeguarding workers’ health and economic security in the short-term, as part of relief packages like the Heroes Act passed by the House of Representatives last week. However, they will only have a temporary impact if they are not used as a spring-board for organizing behind more far-reaching reforms to US labor law that target a significant rebalancing of worker power vis-à-vis employers.

Before Joe Biden became the presumptive Democratic presidential nominee, the primary candidates were debating a series of ambitious proposals for labor reforms, from permitting secondary boycotts targeting the ultimate power players in an industry to requiring worker representation on corporate boards and organizing sectoral bargaining. These kinds of reforms aimed at strengthening worker voice should be even more of a priority for lawmakers in the unfolding public health crisis. Expanded bargaining rights and a framework to extend collective agreements across similar workplaces would give workers and employers the tools to jointly develop policies to protect worker health while maintaining employment. Instead of having to protest workplace by workplace for personal protective equipment and sick leave, workers could negotiate industry-wide best practices. The CWA’s agreements at AT&T, Verizon, and other call center employers provide a model for this kind of coordinated bargaining, based on organizing among and consultation with front line workers.

Most basically, the COVID-19 pandemic is exposing the steep risks American workers face when they lack voice at work. In the absence of a union contract and a collective voice on the job, workers rely on the good will of employers to safeguard their health and well-being. This is often not sufficient at the best of times. US workers were already experiencing growing rates of stress, fatal injuries, and work-related suicides. The danger to public health is drawn in sharper relief in the current crisis. The difference between the approach of union- and non-union call centers to COVID-19 risks is stark, and shows the critical difference unions can make in extending basic rights to a healthy workplace to essential service workers.