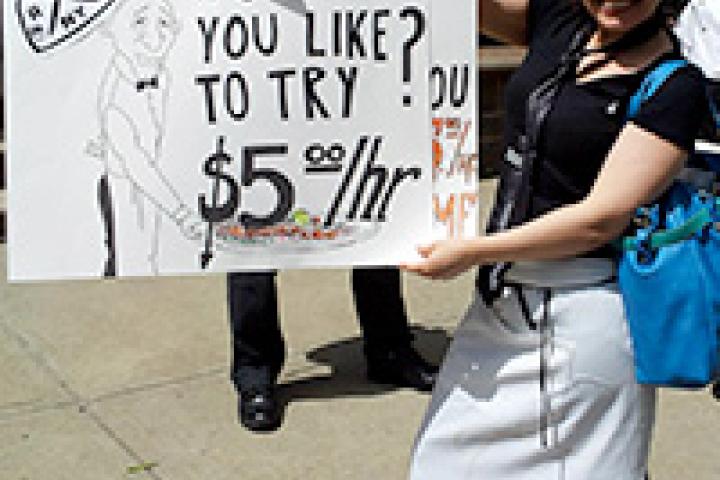 Testimony of Linda Donahue, Prof. Shannon Gleeson, and Prof. Kate Griffith from The Worker Institute at Cornell To the New York State Wage Board On Changes to Regulations Governing Wage Rates and Tip Credits in the Hospitality Industry

Good afternoon Chairman Grippen and members of the Committee. I thank you for the opportunity to speak today. My name is Linda Donahue. I am speaking on behalf of myself and two of my colleagues at the Worker Institute at Cornell, Professors Shannon Gleeson and Kate Griffith. Each of us has conducted extensive research on labor and employment law enforcement issues related to low-wage workers.1

We recommend eliminating the tipped wage in New York. Doing so would help low-wage tipped employees in the hospitality sector make ends meet, while improving employer compliance with the minimum wage law, and without slowing down job growth in the industry.

Improving compliance will help New York's low-wage workers, who are predominantly female,2 make ends meet. It will also be good for (1) law-abiding employers who need fair business competition to thrive, (2) local governments that benefit from a higher tax base, and (3) taxpayers who otherwise pay for services to help families in need. In sum, this is good economic policy.

The theory behind the tip credit is that an employer will first know the total amount of tips an employee received each pay period, then divide that number by the total number of hours worked to ensure that, with tips, the employee is receiving the full hourly minimum wage that pay period.

However, this calculation is complicated because tips can be difficult to keep track of. Anyone who closely observes a server at a restaurant can imagine how this happens. First, some of the tips are paid in cash, often stuffed into a pocket to be dealt with later, while others appear on credit card receipts.

Second, among those tips received, a portion may permissibly be shared with other employees who work during the same shift under a "tip pooling" arrangement, and thus need not be paid to the employee who receives them.3

Third, the tip credit rules allow employers to average tips received across all shifts worked during a pay period, thereby requiring complex tracking and allocation to determine whether or not, on average, the employee has not received enough tips to bring her up to the full minimum wage.

Fourth, the tip credit calculation can also be complicated by the fact that some employees move between tipped jobs and non-tipped jobs during the course of a pay period. If a server, for instance, is cooking or stocking, the employer cannot claim a tip credit for that time and must pay the full minimum wage for those hours.

It is widely reported that many restaurant employers simply assume that their tipped employees are, on average, earning enough tips to bring them up to the full minimum wage, but do not actually engage in the complex tracking required to verify that. As a result, significant numbers fail to make up the difference when tips fall short.4

By contrast, compliance under a non-tip-credit system – the approach that states like California, Minnesota and Nevada follow – is far simpler to enforce: the employer simply tracks the number of hours that a tipped employee works, pays him or her the full minimum wage for each hour, and then allows the employee to keep any tips received as additional income.

It is challenging for any low-wage employee to come forward and complain about the wages they receive because they may lack knowledge of the law and/or fear retaliation.5 Tipped employees may be even less likely to complain if they suspect their employer is violating the law, for two main reasons.

For one, tipped workers may be less likely than their non-tipped counterparts to understand their employer's obligations under minimum wage law. Because federal and state wage law is so complex, and because it is often referred to as a "sub-minimum" wage, many tipped employees may think that their employer is allowed to pay them an hourly rate that is less than the $8.00 minimum. To be clear, the "sub-minimum" is actually the tipped base wage but the employer is required to ensure that tipped employees receive $8.00 per hour once it factors in tips.

The second reason is that tipped employees' paystubs do not typically clearly outline the employer's calculation of the tip credit. New York law currently requires employers to indicate on the pay stub how much of a tip credit they are claiming. However, employers do not need to include on the paystub the total amount of tips that the employee received each pay period. An employee, therefore, cannot readily discern from reviewing his or her pay stub whether he or she received sufficient tips, averaged over the pay period, to make up the difference between the tipped sub-minimum wage rate and the full minimum wage. In contrast, a non-tipped employee's pay stub is much more transparent. It shows the number of hours worked and includes the rate to be applied to those hours.

Employees who do not understand how their wages are computed are not likely to come forward to complain about minimum wage violations. This is problematic given that New York's enforcement scheme, similar to its 49 sister states and the federal government, heavily relies on employees themselves to enforce minimum wage law by personally making complaints to government officials.6

Eliminating the tipped wage rate will benefit employers and taxpayers

To reiterate, eliminating the tipped credit is good for businesses and consumers. A national survey of restaurant employers illustrated that improved wages among tipped restaurant workers is linked to decreased employee turnover and increased productivity.7 Moreover, according to a 2014 forecast by the National Restaurant Association, all of the seven states without a tipped credit are expected to have greater job growth in the restaurant industry in the next decade than New York .8

Additionally, an improved wage rate for tipped workers will enable some low-wage earners to get off of social services, such as food stamp programs and WIC, reducing taxpayers' obligations to essentially subsidize the low wages paid to tipped workers.9

3 A White House report on the tipped minimum wage at the federal level similarly found that the tip credit is hard to enforce because tips are hard to keep track of and because tipped employees sometimes move in and out of work that qualifies for the tip credit. See "The Impact of Raising the Minimum Wage on Women and the Importance of Ensuring a Robust Tipped Minimum Wage," The White House, March 2014, at http://whitehouse.gov/sites/default/file/docs/20140325minimumwageandwomenreportfinal.pdf.

4 Current Population Survey data illustrates that more than 1 in 10 workers in primarily tipped occupations report hourly wages below the full federal minimum wage, even after accounting for tips. In comparison, 4 percent of all workers report hourly wages below the minimum wage. See "The Impact of Raising the Minimum Wage on Women and the Importance of Ensuring a Robust Tipped Minimum Wage," The White House, March 2014, at http://whitehouse.gov/sites/default/files/docs/20140325minimumwageandwomenreportfinal.pdf.

6 This is often referred to as a "fire alarm" enforcement system, which relies on a whistleblower, rather than a "police-patrol oversight scheme" which would require regular government-initiated inspections of all of New York's workplaces. See Mathew D. Cummins & Thomas Schwartz, Congressional Oversight Overlooked: Police Patrols versus Fire Alarms, 28 Am. J. of Pol. Science 165, 166 (1984); Janice Fine and Jennifer Gordon, Strengthening Labor Standards Enforcement through Partnerships with Workers' Organizations, Politics & Society 38 (4): 552–85 (2010).

9 See Sylvia A. Allegretto and David Cooper, Twenty-Three Years and Still Waiting for Change: Why It's Time to Give Tipped Workers the Regular Minimum Wage (2014) 15, available at: http://s2.epi.org/files/2014/EPI-CWED-BP379.pdf.