The Worker Institute brings together researchers, educators and students with practitioners in labor, business and policymaking to address issues related to confronting systemic inequality and building a fair economy, robust democracy and just society. We will share opinion, analysis, research, data, insights and training from our faculty and staff.
Originally published in Labor Leading on Climate Initiative.

Double Trouble: How the PRO Act Could Solve Two Crises at Once 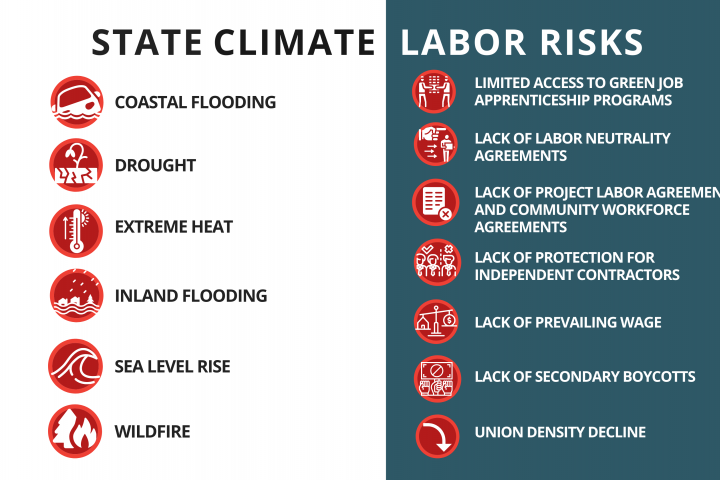 We are in the midst of a global climate crisis. As long as humans burn fossil fuels, global temperatures will continue to increase at unsustainable levels, resulting in sea-level rise, raging wildfires, extreme weather events, and other climate catastrophes.

At the same time, we are in the midst of an inequality crisis. One major driver of our growing inequities is a decades-long assault on workers’ rights to organize into unions and collectively address workplace concerns.

It is incumbent on us to solve both of these crises. But, if you’ve read the news lately, you may view these as separate - even contradictory - goals. President Biden “is trying to square environmentalists’ demands to stop burning fossil fuels with labor leaders’ desire for union jobs linked to oil and gas,” the Washington Post declared this month.  Hitting a similar theme, Politico recently wrote that Biden is “squeezed between promises to go green and bolster unions.”  Can we really tackle climate change and empower workers?

To us, the answer is a resounding “yes.”  In fact, we believe this is a once-in-a-generation opportunity to build a sustainable economy and create a more equitable, just workplace.

On March 9th, the U.S. House of Representatives passed the Protecting the Right to Organize (PRO) Act. If passed by the Senate and signed into law, the PRO Act would be the most significant labor law reform in decades.

Ever since private-sector workers gained the legal right to organize a union (with some notable exceptions), employers and business-backed legislators have fought to weaken collective representation. The Taft-Hartley Act of 1947 weakened the right to strike and empowered employers to fight union drives. It also allowed states to pass so-called “right-to-work” laws, which let workers benefit from union representation without having to pay dues or fees.

In the decades since, employers have gone on the offensive by waging anti-union campaigns, misclassifying workers as “independent contractors,” and successfully pushing right-to-work laws in 27 states. Violating workers’ rights is routine, and low-road employers slash pay and benefits by locating in states unfriendly to labor. As a result, private-sector union density has fallen from a mid-century high of over 30 percent to just 6.3 percent today, while income inequality has skyrocketed.

The PRO Act would fundamentally alter this dynamic. It would overturn bans on solidarity boycotts and prevent employers from “permanently replacing” strikers. Many independent contractors would have the right to unionize, undermining management’s use of misclassification as a cost-saving tool. Employers would face stiffer penalties for impeding unionization, making it easier for workers to use their voices. Significantly, the PRO Act would outlaw right-to-work nationwide.

In other words, it would be a shot in the arm to labor, possibly ushering in a new wave of union organizing. So what does this have to do with climate change? A lot, it turns out.

Every state in the country faces increased climate risks moving into the future, and there has been a real movement towards climate mitigation and adaptation work in recent years. But the workers carrying out these projects face a patchwork of labor standards depending on where they live. And in many of the states with the most climate risks, workers also have the worst protections.

Take North Carolina, a coastal state with several barrier islands. Rising sea levels could have devastating impacts on North Carolinians. Fortunately, the state’s solar industry employs over 6,000 workers and ranks third nationally in installations with over 7,000 MW. Yet, workers in this expanding industry do not have adequate rights or protections. Oxfam ranks North Carolina 47th overall in its “Best and Worst States to Work In America” index, citing its lack of paid sick leave and limits on collective bargaining, among other things. This is not surprising given the state is one of the least unionized in the country.

Georgia provides another example. Georgia ranks among the top ten states in solar energy production and has strong potential for offshore wind. But Georgians will soon face more intense heat waves, sea-level rise, a loss of soil moisture, and an increased risk of drought, posing health and economic risks to the 14 percent of Georgia’s workforce who work in the production of goods. Georgia ranks as one of the worst places to work in America due to its weak wage policies, poor worker protections, and obstacles to union organizing. Unionization rates stand at less than 5 percent.

Like any other work, green jobs aren’t inherently good jobs. Just 4 percent of workers in solar production and 6 percent of workers in wind belong to a union, while utility workers currently have a unionization rate of over 20 percent. Boosting these numbers presents a key challenge to workers’ rights advocates.

Many states have crafted climate plans meant to decarbonize their economies. Some unions have successfully pushed for states and public utility commissions to attach labor standards requirements when the government procures renewable energy projects. We should encourage this, as it has led to real, tangible results in states such as New York and New Jersey.  New Jersey, for example, has required prevailing wages on solar development since 2012 without slowing new solar installations.

But in many states, barriers exist to attaching labor protections to renewable energy work. Much of the job growth potential in clean energy, such as the manufacturing of parts or maintenance services, exist in the supply chain, which some might argue (wrongly, in our opinion) is outside the state’s direct influence. For many of these occupations, employers routinely misclassify their workers as independent contractors or obscure the true nature of their employment to avoid paying benefits.

So where should we look to improve working conditions in less labor-friendly states, as well as up and down the supply chain? The workers themselves.

By stripping away some of the barriers to organizing, the PRO act would create the conditions necessary for workers to organize. This could help increase unionization in the renewable energy sector and beyond. Union representation can decrease workers’ exposure to on-the-job risks associated with hotter temperatures, air pollution, extreme weather, natural disasters, and biological hazards. It could also reduce the vulnerability of workers in industries dependent on fossil fuels and other natural resources. Union training and apprenticeship opportunities - along with union-negotiated “just transition” legislation - will enable workers to adjust and thrive in a changing environment.

The COVID-19 pandemic illustrates how important union representation is during a crisis. Unionized workers had a seat at the table, allowing them to negotiate for paid leave and workplace safety measures that decreased their risk of contracting the virus. Climate change increases the risk of infectious diseases in many parts of the country, and access to good health care, breaks, and paid leave will give workers better footing to handle the next crisis.

As advocates, we do not have to choose between fighting climate change and providing high-quality jobs. In fact, we can only create true climate resilience when we protect workers and allow them to organize. If the United States wants to truly mitigate and adapt to climate change, we must ensure that all climate jobs are high quality and protected by union contracts. The PRO Act offers the type of protection that will allow workers a more equal playing field to fight for dignified work, a better quality of life, and a sustainable future for all.