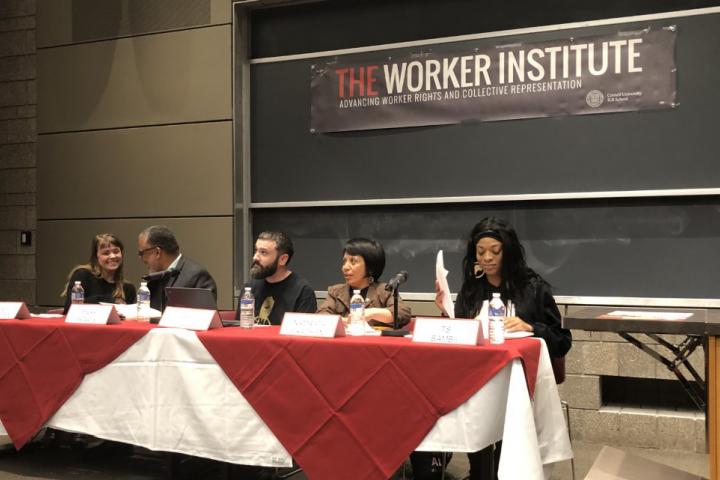 “As a transgender woman of color in the state of New York, my very existence is illegal. Discrimination forces me into sex work to survive—yet it is criminalized. I’m fighting for decriminalization to unmute my voice.”

TS Bambii, a sex worker representative from VOCAL-NY and DecrimNY, spoke about the economic necessity of sex work, and its inherent devaluation and criminalization at the panel “Labor Rights for Marginalized Workers.” Featuring workers from jobs that exist outside the traditional sphere of collective organizing, the panel highlighted voices from sex work, prison labor, and domestic work, all sectors that are denied protections by the law.

Living with a life-threatening illness since being sexually assaulted at 13, TS Bambii was forced onto the streets. Sex work was her only means of supporting herself as an underage minor. As a transgender woman, she spoke about how specific laws, in practice, are afforded to cis-women, but not trans-women.

By criminalizing prostitution, she said society is creating an endless cycle. People enter into sex work out of economic necessity and must remain in sex work out of economic necessity because employers are reluctant to hire those with prostitution on their records. DecrimNY is a coalition to “decriminalize, decarcerate, and destigmatize” the sex trade in New York State. TS Bambii emphasized that any major legal reform surrounding sex work must include the voices of sex workers in its creation if it is to have any real effect.

Namrata Pradhan is an immigrant and former human rights lawyer from Nepal who became a domestic worker upon arriving in the United States. She is a board member and Worker Leader with National Domestic Workers Alliance (NDWA). NDWA works to build collective power and pass legal protections for domestic workers. She described the difficulties in organizing with domestic workers as their workplace is another person’s home and those employers often only employ one worker. Due to this lack of centralization, Namrata and other organizers often have to spot domestic workers on their daily trips to the park, grocery store, or Starbucks.

“Domestic Workers are the backbone of this community, and the work we do makes all other work possible." Namrata emphasized the importance of passing the Domestic Workers’ Bill of Rights in every state to provide basic legal protections to domestic workers.

Another panelist, Jared Ware, a media relations spokesperson for the 2018 National Prison Strike and co-founder of Beyond Prisons, spoke about the brutality and exploitation of prison labor. Many prisoners refer to their labor as “slave-labor,” citing the little to no pay (the average is 38.5 cents/hour, but some states do not pay their prisoners at all) and being forced to work in inhumane conditions.

“Prisoners’ status under the law is not that of an employee, and they do not have any of the contested protections that workers outside the walls of the prison system can organize around.”

Prisoners face solitary confinement or state violence if they dare to organize. These tactics are recognized internationally as torture. Jared spoke of the latest waves of collective action in prisons seen by the 2016 and 2018 prison strikes. A key demand during these strikes was an end to the slave labor.

Organized by the Worker Institute, as part of Union Days, and annual ILR Series of events, the panel served to bring visibility to these workers. Visibility is one of the most powerful tools for organizing. Forcing the public to recognize their role in their lives, their intrinsic value, their dignity, and the challenges they face, these panel speakers are working to change the dialogue around the work they do and build support in their fight for workers’ rights. When workers are unable to access the systems of protection provided by the law, it falls on marginalized workers and their advocates to create an infrastructure to bridge the gap between the law and their lives.