Book Launch: The Future We Need: Organizing for a Better Democracy in the Twenty-First Century 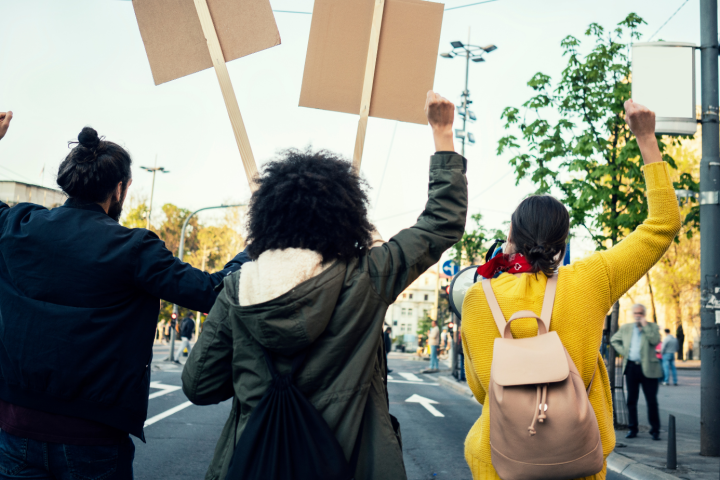 On May 2nd at 11 AM EST the Worker Institute held an in-person and virtual book launch of The Future We Need: Organizing for a Better Democracy in the Twenty-First Century, written by Erica Smiley and Sarita Gupta that will be livestreamed. The book brings a novel perspective to building worker power and what labor organizing could look like in the future, suggesting ways to evolve collective bargaining to match the needs of modern people—not only changing their wages and working conditions, but being able to govern over more aspects of their lives.

Weaving together stories of real working people, Smiley and Gupta position the struggle to build collective bargaining power as a central element in the effort to build a healthy democracy and explore both existing levers of power and new ones we must build for workers to have the ability to negotiate in today and tomorrow's contexts. The Future We Need illustrates the necessity of centralizing the fight against white supremacy and gender discrimination, while offering paths forward to harness the power of collective bargaining in every area for a new era.

Alexander Colvin, Ph.D. '99, is the Kenneth F. Kahn '69 Dean and the Martin F. Scheinman '75, 'MS '76 Professor of Conflict Resolution at the ILR School, Cornell University. He is an associate member of the Cornell Law Faculty. His research and teaching focuses on employment dispute resolution, with a particular emphasis on procedures in nonunion workplaces and the impact of the legal environment on organizations. His current research projects include empirical investigations of employment arbitration and a cross-national study of labor and employment law change in the Anglo-American countries. He has published articles in journals such as Industrial & Labor Relations Review, Industrial Relations, British Journal of Industrial Relations, Personnel Psychology, Relations Industrielles, the Ohio State Journal on Dispute Resolution, and the Cornell Journal of Law & Public Policy. He is also co-author (with Harry C. Katz and Thomas A. Kochan) of the textbook An Introduction to Collective Bargaining and Industrial Relations, 4th edition (Irwin-McGraw-Hill).

Sheri Davis is the Associate Director with the Center for Innovation in Worker Organization at Rutgers SMLR. She is also Assistant Professor of Professional Practice with the Labor Studies and Employment Relations Department in the School of Management and Labor Relations at Rutgers University. She co-directs the WILL Empower (Women Innovating Labor Leadership) program, a joint initiative with the Kalmanovitz Initiative for Labor and the Working Poor at Georgetown University. As Co-director for WILL Empower, Davis hosts two Cohorts of Learning and Mentoring, one for women emerging leaders as well as one for women in executive leadership roles. Prior to coming to Rutgers, she was the Director for the Westside Communities Alliance in the Ivan Allen College of Liberal Arts at Georgia Tech.

Gupta joined the foundation in 2019 as director of the Future of Work(ers) program, bringing more than two decades of experience working to expand people’s ability to take collective action to improve their workplaces, communities, and lives by creating meaningful solutions. She is a nationally recognized expert on the economic, labor, and political issues affecting workers, and is widely acknowledged as a key leader and strategist for building coalitions and policies that protect, and advance the rights of workers.

Elizabeth H. Shuler is president of the 57 unions and 12.5 million members of the AFL-CIO. A visionary leader and longtime trade unionist, Shuler believes the labor movement is the single most powerful vehicle for progress and that unions are a central force in leading lasting societal transformations. She is committed to busting myths about labor, leveraging the labor movement’s diversity for innovative approaches to social justice and making the benefits of a union voice on the job available to working people everywhere.

Shuler is the first woman to hold the office of president in the history of the labor federation. She was elected by the AFL-CIO Executive Council on Aug. 20, 2021, after the unexpected and untimely passing of her predecessor, Richard Trumka. In 2009, Shuler became the first woman elected to the position of secretary-treasurer at an AFL-CIO convention and the youngest woman ever on the federation’s Executive Council.

Serving as one of the lead architects, Smiley has been instrumental in developing the strategic vision of Jobs With Justice to build power for impacted working people through expanding their collective bargaining power as one way to redefine and claim their democracy, while addressing issues of inequality and poverty. She has authored several related articles in the New Labor Forum, Dissent Magazine, the Journal on Class, Race and Corporate Power, and other publications lifting strategic organizing, movement building, direct action, and discourse as core strategies for advancing work in this arena.

The Future We Need: Organizing for a Better Democracy in the Twenty-First Century

Published by Cornell University Press, The Future We Need explores and suggests ways to evolve collective bargaining to match the needs of modern people.