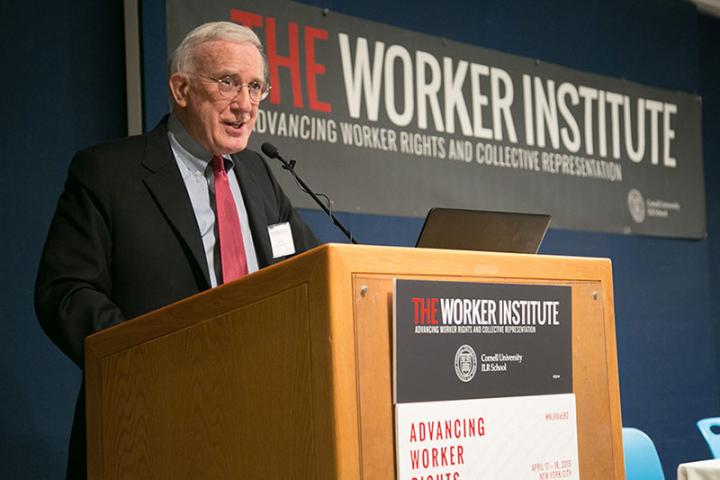 This year marks the 80th anniversary of the National Labor Relations Act. To mark this milestone, on April 17-18, The Worker Institute at Cornell hosted the Advancing Worker Rights conference, turning to some of the most innovative thinkers and leaders in the world of labor to address the pressing question: Where do we go from here?

“Much of the theme of the conference is change: where do we go from here? What new approaches are needed to promote and protect worker rights?” said James Gross, professor of labor relations, law, and history at ILR and conference chair, during an interview.

The conference provided a forum for leading labor activists, policymakers, lawyers and academics to discuss current challenges facing the labor movement and the need for innovative responses. Panels on topics such as ‘Pushing the Boundaries,’ ‘Understanding Workers’ Right as Human Rights’ and ‘From Here to Where?’ gave participants the opportunity to explore and consider a range of alternative approaches to advancing worker rights and collective representation.

Gross continued, “Over 300 professionals, academics, alumni, students, activists, labor leaders and others attended, addressing these questions and participating in discussions with panelists who are the best of the best in their fields.”

“This was an extraordinary event that reaffirmed the ILR School’s connection with, and commitment to, the rights of all workers – as well as its leadership in national and international labor matters,” he said.

The Worker Institute engages in research and education on contemporary labor issues, to generate innovative thinking and solutions to problems related to work, economy and society. Embodying the spirit of Cornell’s land grant mission and ILR’s commitment to public engagement, the institute plays a critical role in preparing leaders at the forefront of worker rights.

“We’re commemorating the 80th anniversary of the National Labor Relations Act, which established the right for private sector workers to unionize and engage in collective bargaining, which is central to what the Worker Institute is about,” said Jeff Grabelsky, associate director of The Worker Institute.

“That it’s promoting collective bargaining and collective voice and worker’s rights is a wonderful opportunity to reflect back on the past, analyze where we are and then project into the future about how we’re going to reestablish and reassert worker’s rights in America,” he said.

The signing of the National Labor Relations Act in 1935 was a watershed moment for workers and the American labor movement. It established a legal framework to govern union recognition, collective bargaining and collective action. Most importantly, it guaranteed the rights of workers to organize. Over the years, the law has been reinterpreted and amended, restricting categories of workers covered by its protections.

“To me, what’s great about the conference is the wide-range of learning opportunities here about union organizing, about the legal context, about how we link to a broader political movement,” said Larry Cohen, president of Communications Workers of America and keynote speaker, who further commented on present day worker rights issues, including Fast Track legislation for the Trans-Pacific Partnership agreement.

“That’s going to be decided within the next two weeks, and the massive coalition of millions of environmentalists, labor, students, human rights advocates, community organizations that are fired up across the country to say ‘we believe in a global economy, we do believe we live in one world, but it needs to be our world, not just the world of corporate America,’” Cohen said.

Tying in to the ILR School’s mission, a primary goal of the conference was to engage students who will become the leaders of tomorrow. Founded in 1945 as the New York State School of Industrial and Labor Relations, the ILR School is advancing the world of work through teaching, research and outreach today. ILR’s mission is to prepare leaders, inform national and international employment and labor policy, and improve working lives, and as the world of work evolves, the school’s focus broadens to keep pace with that change.

“I think it’s a refreshing thing to see, something that activates and ignites the interest of the young people that are interested in the labor movement,” said Mark Gaston Pearce, chairman of the National Labor Relations Board.

Pearce said he is concerned the rich history of labor relations in the U.S. is becoming lost in society as individuals are tuning out labor issues, which are important issues that need to be introduced in an engaging way.

“Nowadays, when we have young people who want to make a difference, they need to get an opportunity to see it and hear dynamic speakers, like Larry Cohen and some of the other distinguished guests that we’re going to have here, so that they can put everything into perspective and feel alive about what they can do and what difference they can make,” Pearce said.

Students who attended the event said it fueled their passion to focus on making a difference after graduation in the labor movement and beyond.

“One of the highlights of my experience as a Worker Institute research fellow was the opportunity to attend the Advancing Worker Rights Conference in New York City,” Alexandra Wagner ’17 said. “This was an amazing opportunity to conduct interviews with some of the keynote speakers, and also to get a more in-depth understanding of the labor movement and the ways in which immigrant workers and worker centers that support them are persevering in today’s labor climate."

According to Rosemary Batt, Alice Cook Professor of Women and Work, the conference was, “one of the most important and successful events of the ILR School in recent times.”

For more information on the conference and the Worker Institute, visit www.ilr.cornell.edu/worker-institute.