Panel with Policy Makers on Gig Economy held in Albany

The panel discussion was titled "Policy Strategies for Protecting Workers in the New Economy." 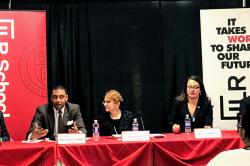 “Workers are kept separate from each other and a lack of trust between workers becomes an advantage for unscrupulous employers who not only steal wages from workers but put them at risk in dangerous workplaces," said Maria Figueroa, in a panel discussion in Albany on wage theft in the new economy.

The panel discussion titled "Policy Strategies for Protecting Workers in the New Economy" was held on Wednesday, May 15th in the Legislative Office Building, Albany Room Empire State Plaza, Albany, NY. The panel was hosted by the Worker Institute and the Labor and Employment Law Program of Cornell University's School of Industrial and Labor Relations.

“As a public defender, I saw people do real-time for a very small amount of theft and at the Department of Labor I see people do no time for huge amounts of theft because they are stealing from workers,” said James Rogers, Deputy Commissioner for Worker Protection and Business & Labor Affairs, New York State Department of Labor. 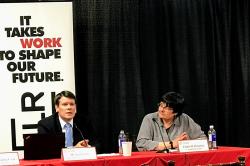 Other speakers included Hon. Catalina Cruz, NYS Assemblymember, District 39, who discussed her wage theft bill that would turn wages into property so employers who steal wages from workers could be sued for theft. 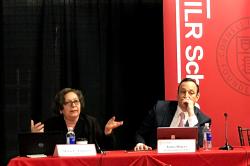 The Worker Institute recently published a new study, "On-Demand Platform Workers in New York State: The Challenges for Public Policy," on the pressure the gig economy puts on individuals.