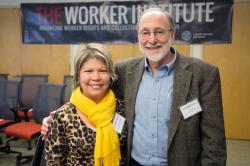 She also has electoral and public sector campaign experience having worked for many national and local campaigns including Obama for America 2008 in NJ and former Governor Jon Corzine’s (NJ) re-election campaign in 2009; and recently as member of the Booker for Senate 2013 and 2014 campaign teams.  She has served in the transition teams of former Governor Corzine, Mayor Cory Booker and President Obama. She is considered an expert on labor, trade and immigration policy.

Patricia has worked as a labor educator and trainer for The Worker Institute Union Leadership Institute (ULI) since May of 2014.  She is also the founder and president of Campos Strategies Group, LLC; a labor, political and organizational development consulting firm that focused on strategic development, grassroots organizing, coalition building and media outreach on progressive issues on a national and international level.

Patricia is excited to return to Cornell University. She is a graduate of the ILR School (1996) and the Cornell Institute for Public Affairs, CIPA (2007). She is currently pursuing a PhD from Rutgers University, Newark.  She resides in New Jersey with her husband Bob and twin sons Diego and Enrique.