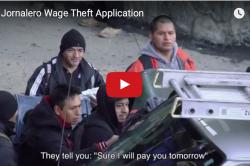 Conceived together with the support, research, and dynamic collaboration of immigrant day laborers, organizers, developers, lawyers, and artist Sol Aramendi, The Jornalero Wage Theft App links the struggle for immigrant workers’ rights to the concept of community accountability. The smartphone-based app will fight wage theft and restore power to the worker by allowing users to safely share their experiences and report abusive and neglectful employers, effectively inserting transparency into a previously exploitative and alienating system.

The Worker Institute's Director of Labor and Policy Research Maria Figueroa and Research Specialist Legna Cabrera played a critical role in convening and facilitating forums that brought together workers, researchers, advocates and organizers. Figueroa serves as co-chair of the Precarious Workforce Initiative.

"Our involvement in the The Jornalera Wage Theft App project has primarily consisted of hosting and facilitating forums for worker center leaders and members to develop the content for the application," says Figueroa. "We provide input in these discussions by emphasizing the importance of setting goals and evaluation processes, and we’ve been exploring the possibility of using the app as a platform to disseminate information about basic labor rights and standards."

"We are thrilled that workers centers are reaching out to us from around the country to learn more about the project and the process of developing the app," says Cabrera.

In addition to providing a valuable tool to workers, organizers and advocates, the app will serve as a tool to gather data on a group of workers that can be challenging to study due to the diverse geographies and populations in the day labor industry.

"We’re interested in the number of day laborers seeking work in the New York metro area as well as on their working conditions," says Figueroa.

The project was recently featured in the New York Times:

Just past sunrise on 69th Street, near the No. 7 subway station in Jackson Heights, Queens, men in backpacks and work boots gather in groups, many on their cellphones.

They are workers at one of the largest day laborer stops in New York City, hoping to be hired. Most are undocumented immigrants who have reported being cheated by employers. In the fight against wage theft, their phones could soon become their biggest allies.

After three years of planning, an immigrant rights group in Jackson Heights is set to start a smartphone app for day laborers, a new digital tool with many uses: Workers will be able to rate employers (think Yelp or Uber), log their hours and wages, take pictures of job sites and help identify, down to the color and make of a car, employers with a history of withholding wages. They will also be able to send instant alerts to other workers. The advocacy group will safeguard the information and work with lawyers to negotiate payment.

“It will change my life and my colleagues’ lives a good deal,” Omar Trinidad, a Mexican immigrant, said in Spanish through an interpreter. Mr. Trinidad is the lead organizer who helped develop the app

“Presently, there is a lot of wage theft,” he said. “There has always been wage theft, and the truth is we’re going to put a stop to that.”

To read the full article, visit the New York Times.

The Jornalera Wage Theft App was initially funded through contributions by The Worker Institute and NDLON, and has recently attracted substantial funding from the AFL-CIO.  All the data gathered through the app will be kept in secured servers at the worker centers, and under the oversight of the National Day Laborer Organizing Network (NDLON).