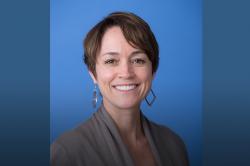 Investors in Europe are pouring money into Chinese companies with factories in Africa, where workers making less than $200 a month produce goods bought by Americans.

Global capitalism examples like this show how a few benefit while millions are robbed of a basic human right – the ability to work in a safe environment for equitable wages, Shawna Bader-Blau said in the ILR Union Days keynote address Thursday.

“The challenge for everyone in the human rights community is to stand together to fight to create more decent work opportunities, better livelihoods and more human dignity and freedom,” she said at the event, sponsored by ILR’s Worker Institute.

In impoverished countries, many welcome the opportunity to work in a factory, but a dark picture usually emerges, Bader-Blau said. Many women are the victims of sexual violence, for instance.

People are desperate to work -- millions crossed borders last year to find work in another country, but often sacrificed their human rights, said Bader-Blau, who leads the Solidarity Center, affiliated with the AFL-CIO.

The center works in dozens of countries with hundreds of labor unions, non-governmental organizations, legal aid groups and other coalitions to support worker rights and fight exploitation.

Despite the flagrant abuse of worker rights worldwide, it is possible to fight for social justice and build democracy, she said. “Global solidarity can solve this.”

Allied grassroots organizations across the globe could build a radical agenda of inclusion that would lead to a just future for workers, Bader-Blau said. In places such as Brazil, South Africa and Tunisia, labor unions have led ground-breaking cultural change, she told more than 100 people in Ives Hall.

In an interview before the talk, Bader-Blau attributed her career path to her family. Her grandfather fought discrimination against Mexicans in California schools. Her father worked to help janitors and her mother organized nurses.

One of her most vibrant memories evolved from the 2012 Dhaka fire that killed 112 people in Bangladesh. Bader-Blau got to know a young woman who pushed for a better wage and an end to the firing of pregnant women. She was repeatedly humiliated by men, including her supervisor.

She organized with 25 other women and eventually sat at the bargaining table across from her supervisor -- as an equal. Collectively, the workers gained wages, benefits and the right of work when pregnant.

“I have also seen women in Morocco of varying education create a union. Collectively, they became equals with the employer when bargaining for sick days, time off coverage and other benefits.”

Bader-Blau participated in the Worker Institute’s National Labor Leadership Initiative in 2013. “The three-week program gave me the skills I needed to take on my global leadership role. I met labor leaders across the U.S. and Worker Institute consultants who became partners. We still are connected and the partnership is strong.”

Mary Catt is assistant director of communications at the ILR School.