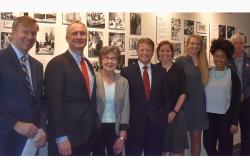 Assemblyman Sean Ryan said, "This funding will allow the Cornell School of Industrial and Labor Relations to continue to help Western New York grow. The High Road Fellowship program has drawn several Cornell graduates back to Western New York to continue the great work they start when coming to Buffalo during the program. I'm proud to stand with members of the Senate and Assembly to provide funding that will allow this important program, as well as several other excellent ILR programs, continue to grow."

The High Road Fellowship program supports grassroots economic development and urban revitalization. Since 2009, the program has brought 150 Cornell undergraduates from all over the world to Buffalo for an in immersion in community-based economic development. Fellows have provided assistance to a number of local organizations driving Buffalo's revitalization such as Learning Disabilities Association of Western New York, Breadhive Cooperative Bakery, Western New York Law Center, Say Yes Buffalo, Western New York Area Labor Federation, Open Buffalo and the Partnership for the Public Good.

The funding will also launch a new track of programming on Careers in Public Service. This initiative will create internships and engaged learning opportunities for students to work with and learn from local officials and leaders working for the greater good.

State Senator Patrick Gallivan said, "The School of Industrial and Labor Relations has a long history in Buffalo and has made significant contributions to the economic resurgence of Western New York. I am proud to join my colleagues in securing funding in this year's state budget to allow Cornell ILR to continue its research of labor and employment to help measure its impact on our community and our economy."

Assembly Member Crystal Peoples-Stokes said, “I am proud to have voted with my delegation colleagues to approve funding for Cornell ILR in Buffalo. They have played an integral role improving the economic vitality of Western New York. I look forward to our continued partnership in the years to come.”

The new Buffalo Commons project, which is hosted downtown in the Market Arcade, is a collaborative space shared by organizations to allow for collective knowledge exchange and public policy development. The Buffalo Commons digital library, hosted at www.digitalcommons.ilr.cornell.edu/buffalocommons/, allows the community access to research created and maintained by the Partnership for the Public Good and Cornell in Buffalo, as well as the researchers’ network of local scholars committed to Western New York-focused research.

"Cornell University's ILR School is a New York state school uniquely focused on advancing the world of work," said Lou Jean Fleron, ILR emerita extension faculty. '"With roots in Buffalo dating to 1946, ILR in Buffalo today is a vital hub of students, faculty and community organizations working on the edge of the new economy. Our elected representatives are not only supporters, they are our partners in creating a stronger regional economy based on innovation, collaboration and shared progress."

The funding celebrated Thursday at the Market Arcade, home to Cornell in Buffalo, will allow ILR to continue to attract top young talent to the region to work with local organizations and public officials to develop ways to improve a resurgent community. Additionally, funding will strengthen access to information on economic development, employment, government, education, poverty and housing to everyone in Western New York.

State Senator Chris Jacobs said, "Through initiatives like Buffalo Commons and High Road Fellowships, the Cornell Industrial and Labor Relations School continues to make positive contributions to the revitalization of our city and our regional economy. It is my hope the study to be completed with this funding will not only measure labor's impact on Western New York's economy, but also tell us how we can enhance that impact going forward."

State Assemblyman Robin Schimminger said, "I am pleased to announce that the Assembly has earmarked $150,000 in funding for the Cornell ILR School in Buffalo. With its strong foundation in industrial and labor relations, supplying students with skills to contribute to the economic development of our region, this institution has allowed Western New York to benefit from Cornell University's Ivy League credentials.''