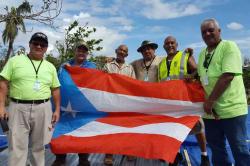 Eduardo Rosario is the New York City Chapter President of the Labor Council for Latin American Advancement, he also works as an administrative coordinator for The American Federation of State, County and Municipal Employees Union (ASCME) local 375 and DC 37. In the interview below he details the relief efforts orchestrated by NYC unions in the wake of Hurricane Maria. He elaborates on the unique space that the labor movement occupies in society, which allows the movement to position itself as a catalyst for larger efforts of social justice and community solidarity beyond the workplace.

D: Who are you and what is your role in the labor movement?

E: My name is Eduardo Rosario, I am the New York City Chapter President of the Labor Council for Latin American Advancement. I also work here in NYC for the American Federation of State, County and Municipal Employees Union (ASCME) local 375 and DC 37, on contract as an administration coordinator.

D: What are your efforts to provide relief (to Puerto Rico) in the wake of Hurricane Maria?

E: Well that would speak to my role as the city chapter president of the Labor Council for Latin American Advancement. We ourselves have and are still raising funds, we had a relief fund drive for Puerto Rico, we have also done one for Mexico (following the earthquake). In fact, we've had members who are participating directly in providing relief, be it going to Puerto Rico, bringing food, water, generators, to actual medical assistance by the nurses unions. Other unions who have been active in Puerto Rico Relief efforts include The Teamsters, The Transport Workers Union, and other locals such as ASCME 375 and DC 37, who include water ecologists and research scientists. Just to give you an idea of our various membership that are involved in direct relief efforts that are above and beyond the relief drives that we've been doing.

D: Have you been down to Puerto Rico?

E: Unfortunately, I have not been able to make it.

D: Have you had contact with people that have?

D: What have they told you about the scale of the damage?

E: The damage is of profound proportions. The rainforest, El Yunque, basically all the lush green of the rainforest is all stripped bare, many of these beautiful trees are just standing taunt with no branches or leaves. I have some family that live in the San Juan Region, but I have a lot of family, where it was hardest hit in El Yunque, they live in the country. That region is the mountain region, and many of the homes in the hill and mountain region of El Yunque essentially no longer exist. Debris has not been cleared from many of the highways and roads. There is a river that runs through the region of El Yunque that reached its bank and caused extensive damage.

There is still no electricity. Water -- sometimes they have it, sometimes they don't. Sometimes they need to find it by going into town. There's supposed to be the federal relief officers, but to date they haven't seen them. Lines for food are extremely long. Lines for water are extremely long. Lines for gasoline are extremely long. And they're being rationed. Heavy equipment and trucks that run on diesel fuel can't be used because there is a shortage of diesel fuel on the island. Some of my family had to leave the island because they had medical issues, like diabetes, and there is a huge shortage of medicine. It's not easy. It's not easy at all. It is particularly hard for the elderly and those that are physically disabled, and it's hard for the children.

E: The union movement coordinating and mobilizing with civil society as a whole has played a leadership role in any and all aspects of this relief effort. The union that represents the electric workers on the power grid, they've been playing a key role. There are members of the teachers union here (NYC), working with members of the teachers union in Puerto Rico, as well as with the house care workers union in Puerto Rico. Which is really something to behold, to see what solidarity really looks like across sector lines providing the help for those that are vulnerable.

D: Do you see unions as being larger bodies of social justice, rather then being just means of solidarity and collective bargaining for members in the workplace?

E: Absolutely. The labor movement has been particularly vocal for example when this disaster first hit Puerto Rico and President Trump, quite insensitively, would make comments about how federal assistance can't be expected to be there forever. Saying things like, "You guys have a lot of problems," and "You have a lot of debt." That is not true. The labor movement has been outspoken, particularly in this time of crisis because this debt has been mentioned at nausea. This debt had been created, manufactured, by global capital and Wall Street, by the hedge funders. This was done through a little unknown amendment to our legislation that exempted Puerto Rico from Chapter 9 Bankruptcy protection.

The labor movement has also been outspoken on motivating and advancing a discussion on climate change and how these extreme weather patterns are going to be more frequent. We need to have a discussion on how to break away from fossil fuels which are the main contributors to carbon emissions in our atmosphere that are directly responsible for global warming. The very thing that is creating the fertile conditions for extreme volatile storms like Maria and Irma.

And this is just the beginning. It has been the labor movement that has been outspoken on reaching out and making vocal our needs on a community level, on a one-to-one level that many politicians are not addressing. So the labor movement occupies a unique and powerful space in society. It is something in my opinion, that does not get spoken about enough, but needs to be mentioned over and over again. And it's preciously for these reasons that unions play an important role in democracy for any society.

D: I hear a lot from people that critique unions that unions can not always represent their members independent interests. How do you convince members that doubt it is their place to be providing these relief efforts or who believe that unions are not meant to be a larger body of social justice, to care for the greater social good of the community?

E: It is without a doubt that unions are not perfect. They make mistakes. There are crises of leadership in the labor movement. But at the same time, Wall Street doesn't positively represent their stockholders either. They are directly responsible for many global economic recessions. The Malaysian crisis in the 90s, the economic crisis that struck Portugal, the economic crisis that struck Greece, the list goes on. Wall street pushed for the free trade policies that have exasperated regional economies and are directly responsible for the mass migration of people, and not just here in the Americas but globally. So let's put things in perspective.

One thing I will address though is that unions bring a voice to those who feel they have no voice in the workplace. You are never going to bargain a better deal on your own then you can collectively with other workers standing shoulder to shoulder. Organizing your activities with one voice, as one, for what you are seeking, be it better wages, better medical benefits, or a safer work place, can help create change. Change requires that workers band together and work together.

I think that the labor movement is very important, because of the intersection of labor and its activities in the relief efforts. The relief efforts are not just relegated to union members, but to the community as a whole. Labor can be a bridge between what you need between you and your employer and it can also be the face and the voice of justice, and what is right, and getting the community on board to support your justice and dignity issues in the workplace.

For example, lets take safe working conditions. That is a very important condition for all workers. Environmental degradation begins in the workplace and then filters out into the community. Unions like the United Auto Workers, the Oil Chemical Workers, the United Steel Workers, have played historic roles in that issue. The issue of worker compensation, that is one contribution that the labor movement has made that benefits everyone.

When it comes to leveling the playing field as far as wages and being able to mobilize, unions are a great mechanism for change. The solution for workers in the public sector is to band together and start mobilizing. And not just at the bargaining table, but on the shop floor, on the street, and with the community. And that is very important. Why? Because public workers are providing so many services for the community at large. There again we make these connections, so a worker can see that they are part of something much bigger, much greater, and it's preciously for that reason why I say labor occupies a very unique and powerful space in society. And it is preciously for that reason that global capital and wall street and the dark money that comes into our state or the propaganda money from ALEC, are looking to silence that voice because it's counter to the agenda that they want to see advance. What they want to see advance has nothing to do with justice in the work place, justice in the home, or justice in the community. What they truly want to do is exploit everyone in the workplace and exploit natural resources. And what they truly yearn for is to return to the days when unions were illegal. But we're here to put a stop to that agenda because humanity was meant to do more then just that.

D: Thank you so much for taking the time to speak to me Eduardo!