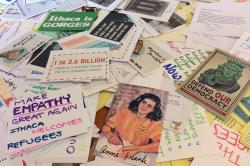 This past Tuesday, the Tompkins County Legislature passed a resolution making the county a “sanctuary county.” Titled “ Public Safety for All ” this resolution serves to “Maintain a safe, inclusive government and ensure the protection, order, conduct, safety, health, and well-being of all persons in Tompkins County.” This was the first resolution of its kind passed in New York state since Trump’s election and executive order on immigration. Additionally, since the county legislatures are elected positions, the passing of this resolution was a bipartisan effort. The policy did not use the language of “sanctuary” and followed closely guidance provided by the office of NY State Attorney General Eric T. Schneiderman on January 19th, which balanced federal pre-emption concerns with principles of home rule and looming threats to threaten sanctuary cities with loss of federal funds .

According to the legislature chair Mike Lane, this resolution “ reaffirms what is already practiced .” By passing this resolution, Tompkins county legislature hopes to grant residents a sense of security by knowing they can “ interact with the police without fear .” The compromise resolution states that “a person may be detained for up to 48 hours on a “civil immigration detainer,” in the absence of a judicial warrant if there is probable cause to believe that the individual has illegally re-entered the country.”

According to the Pew Research Center , “unlawful re-entry” has increased substantially over the last two decades, accounting for “nearly half (48%) of the growth in the total number of offenders sentenced in federal courts” from 1992-2012. Nearly all of those convicted of “unlawful re-entry” serve a prison sentence – on average 2 years. However, as anthropologist Ruth Gomberg-Muñoz argues, “unauthorised entry disproportionately penalize”(s) working-class Latinos, creating a minefield of racialised obstacles to their lawful status.” In effect, “racialised criminalisation and higher hurdles to lawful status amount to a one–two punch that makes it extraordinarily difficult for undocumented Latinos to ever change their status, even when they are eligible for an immigrant visa based on their marriage to US citizens.”

The county resolution also leaves certain law enforcement activities up to the discretion of individual officials by stating that “County Departments, officers, personnel, and agents shall not inquire about or collect from individuals...information concerning citizenship or immigration status unless necessary to perform official duties.” Ultimately, it is a compromise policy that does not ensure safety for all undocumented immigrants within Tompkins County, but it is a positive compromise taken by the legislature to create a safe space for undocumented people.

The ability to ensure resident’s safety is difficult to begin with, especially with empty pronouncements, as explained by César Cuauhtémoc García Hernández on his Crimmigration blog . García Hernández warns that the term sanctuary cities could become meaningless if the claims of sanctuary status are simply empty promises. In sanctuary cities like Portland we have “ already seen ICE agents show up to courthouses ” and arrest people for trying to follow state judicial proceedings. However, he proses ways in which sanctuary policy can be more effective in opposing federal authorities by suggesting policies that “ prohibit ” local officials from gathering immigration information in the first place. He also proposes that we can strengthen sanctuary policy by giving immigrants fair and equal access to the law by ensuring that undocumented community members never “ enter an immigration courthouse without legal assistance. ”

On January 29th, in an email to the Cornell Community, President Hunter Rawlings expressed the University’s continued support of undocumented students, despite Trump’s executive order on immigrants. However, Rawlings wrote that “ Cornell representatives, including CUPD, will comply with lawfully issued subpoenas and warrants .” CUPD has yet to issue guidance that follows the city or county lead on sanctuary city status. Therefore, Cornell students are currently less safe on campus than students in other parts of the county. The university is in the process of considering additional changes to policy, but further guidance has not been issued as of this publication..

In sum, although there is no clear definition or full assurance that sanctuary cities will protect all their residents, the resolution passed in Tompkins County demonstrates an effort by law enforcement to compromise, and to dedicate themselves towards the safety of their community members. However, as argued by historian Elliot Young , the legacies of the Clinton and Obama administration looms large in creating a bureaucracy and set of policies that for a long time has deported many more than “criminals”, who even so were often delivered right into the hands of ICE by “broken windows” approaches to policing. Young pushes us to consider these deeper systemic policies driving deportation: “Sanctuary is a meaningless designation if immigrants, either documented or undocumented, can be arrested for low-level crimes such as subway fare-evasion, and then deported once the city sends their fingerprints to the FBI and thereby to ICE.”