Interview with Vittorio Longhi, Author of “The Immigrant War” 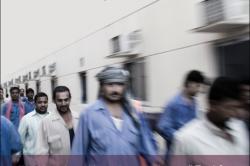 Vittorio Longhi is an Italian journalist of Eritrean origin. His writing has been published across a range of print and online media, including the Associated Press, the Guardian, the New York Times and La Repubblica. He is the author of The Immigrant War: A Global Movement Against Discrimination and Exploitation. This interview was conducted via email with the author Vittorio Longhi, while he was in Geneva, Switzerland.

Interview conducted via email while Vittorio was in Geneva, Switzerland

Alexandra Wagner: How did you first get introduced to the labor movement?

Vittorio Longhi: My work as a labor journalist dates back to the mid-1990s. I used to live in a small industrialized town in central Italy and to write about employment, unions' demands, workers' fights and strikes, jobs taken overseas – often to Eastern Europe and Asia, especially in the garment sector. A few years later I moved to Rome and then to London, and began to deepen the issue of global trade, labor and migration.

Alexandra Wagner: Can you describe the importance of the role of the immigrant labor movement?

Vittorio Longhi: Immigrant workers have an enormous potential for reviving the labor conflict, in every country that depends on their work. Immigrants can play a determinant role when they change from being passive victims of exploitation to become conscious agents of change. In order to succeed, however, they should ally with other groups of workers who are left at the margin of the labor market, like the young local workers suffering casual work and rampant unemployment in the absence of social protection. Immigrants and casual young workers are united by the same structural conditions of insecurity and vulnerability, so the same unity should be found to fight back.

Alexandra Wagner: What do you view as the most critical measures that could be taken in efforts to end discrimination and break the chain of exploitation of the immigrant workforce?

Vittorio Longhi: Migration is global phenomenon that cannot be left to the decisions of individual states, often driven by a domestic political agenda and influenced by xenophobic propaganda. Unilateral militarization of borders, excessive restrictions to work permits and quotas do not stop movements of people, but make them more insecure and contribute to human trafficking and exploitation. A crucial measure to prevent this would be the effective multilateral cooperation between industrialized countries and developing countries. However, the richest and most influential countries are still reluctant to accept better conditions for immigrants who enter their labor market.

Vittorio Longhi: The trade unions can play a great role to prevent exploitation of immigrants and to avoid social dumping in local labor markets. For example, in the migration flow that goes from South-East Asia to the Persian Gulf, I have seen one of the most effective strategies the trade unions have developed to implement effective organizing and ensure decent work conditions. They succeeded in building a ‘bridge’ between the organizations of the countries of origin and those in the places of destination. The aim was to follow and assist every migrant from departure to arrival. And on return. However, the trade unions in receiving countries, especially in advanced economies, often seem reluctant to represent the demands of immigrant workers, while improving their conditions would have a positive impact on the entire workforce.

Alexandra Wagner: Your work examines the struggles faced by migrant workers in all corners of the world. What common dominators exist/what parallels can you draw between the immigrant struggle on a global scale?

Vittorio Longhi: All the countries I visited, from those in the Persian Gulf to the United States, from France to Italy have different immigration histories, policies and laws. However, there is a common dominator, a convergence towards the same system when it comes to quotas, work permits and the attitude towards undocumented immigrants, which is rather repressive. In general, a guest-worker approach prevails, by linking permits to stay solely to contracts of work, even when these are constantly renewed and immigrants end up spending ten or twenty years in a country, with no chance to integrate nor benefit of social protection. In general, I saw that the fight back against this system succeeds and change migration policies only when it is endorsed and coordinated with the local unions and advocacy groups. Local support can make a significant difference since it helps to legitimate immigrants' struggle and to organize.

Alexandra Wagner: Are there certain regions where you see the push for increased immigrant worker rights taking off more than other regions?

Vittorio Longhi: Actually the worst situation immigrant workers face today seems to be the Persian Gulf, where the sponsorship system, the so-called Kafala totally bounds the worker to the sole employer and not to the employment itself. This gives the employer enormous power over the worker, especially in places where there is no freedom of association and - except from a couple of countries, like Bahrain and Kuwait, trade unions are almost non-existent. However, because of such a harsh system of control, in the Gulf there is a very low number of undocumented immigrants, while in Europe and in the United States many are left without papers, in particular when their contract of work expires and they can't find a new job. Such a condition cannot but favor abuse and exploitation.