German Unions and the Rise of Anti-Immigrant Populism 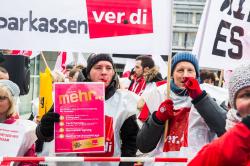 Neva: Romin, you work on the issue of migration for the labor union Ver.di. What exactly do you do?

Romin: I am a policy officer for topics concerning migration for the trade union Ver.di. I follow issues concerning migration within our structures and am in close contact to the migration committees that exist within Ver.di. In the course of the general elections our migration committees asserted a growing discrepancy between the resident population of Germany and those that have a right to vote. Therefore we campaigned for the right to vote for everyone who lives in Germany. We organized street-stands and sent out postcards protesting that the right to vote resides only with German nationals. We collected shorts films portraying employees talking about the subject on our website.

Neva: The elections are over and the results of the far right party AfD were shocking. They ran on an election campaign that consisted of xenophobe and racist discourses. Is there a general shift towards the right in Germany?

Romin: Yes, there is a general shift to the right. As trade unionists we notice this shift in our education work, at seminars. Some participants articulate right winged political positions that are aligned to the ideology of the AfD. Typically such political convictions are articulated through an antiestablishment postures and a strong anti-media discourse - along the lines of "fake news". That AfD discourses are also represented among out members makes sense. The political consciousness of our members is not only formed by their union membership or class position . Their views are influenced a lot by social media outlets where the AfD has been successful in spreading their convictions. Trade unions in Germany have missed the opportunity to intervene in the political debate through social media channels. This has made it far too easy for the AfD to gain ground.

Neva: Trade unionists were highly represented among AfD voters. What are the reasons for this?

Romin: Particularly white men between the ages of 45 and 65 voted for the AfD and this group is highly represented in labor unions. Except for the trade union Ver.di and the NGG, which has more female than male members, the majority of trade union members in Germany are men. However when looking at the statistics that state that trade union members are particularly inclined to vote for the extreme right, it is important to take into account that the members of the German Civil Service Association are also part of the trade union movement and their branches are especially open towards right-winged rhetoric. The labor organization of the German Police Forces and the teachers unions within the German Civil Service Association are examples.

In general labor organizations are not sealed off from society but are part the German society. Solidarity is not automatically part of the ideology of labor union members.

Neva: Is there a link between neoliberalism and the rise of the far right?

Romin: In the public discourse the rise of the far right is often associated with transformations in the working environment. Neoliberalism is paired with a decline in security, a loss of control about the ability to plan you own life and anxieties of social degradation. These arguments are certainly right but do not entirely account for the rise of the extreme right. We are not so much facing a social protest in the form of right winged populism but are rather confronted with a right winged protest that takes on forms of social protest. Ultimately, AfD voters want to uphold their privileges that are transmitted through race and nationality within a society that is increasingly becoming multicultural. Right winged ideologies have always been and are still today very much ideologies of inequality.

Neva: Is this being discussed within the labor movement in Germany? What are the reactions of Ver.di following the strong increase in AfD voters among unionists?

Romin: Some members argue that the AfD is a democratically elected party and that we have to accept that. This is then paired with an anti-establishment argument stating that the AfD should not be excluded otherwise we put ourselves in a similar position to Merkel.

I believe that the German trade union movement has not yet really started to struggle against the AfD. There are many admirable initiatives at the local level among our members but an offensive confrontation with the threat of the extreme right hasn't taken place within the DGB-trade unions. The analysis often stays on a superficial level. The DGB decided to concentrate on several topics such as rents and the abandonment of collective agreements and to contradict the AfD in these areas. Considering that unions are the largest "migrant organizations"(1) in Germany they were too quiet on the topics of migration and asylum. In my opinion, this was problematical since racism is what keeps a heterogenic party such as the AfD together and therefore needs to be exposed and contradicted in order to effectively present a counter power to them.

Neva: What in your opinion is the main task German labor unions face today?

Romin: I believe the German trade unions should confront the AfD in an offensive manner. That alone is not enough however. They need to link their demands to actions and mobilizations on a company and shop floor level. Positive examples were the trade union activities in the area of care work. During the national election campaign there were several strikes in hospitals with links and inclusion mechanisms towards patients and their relatives and there were protest marches in many cities across the country. These mobilizations have shown us that in order to influence and change a debate within the society there has to be a link to the shop floor level.

German trade unions equally need to stop focusing on (potential) AfD voters. Why are trade unions, as the organization with the largest members of migrants in their ranks, not focusing on addressing migrant-voters? The AfD pretends to be a worker's party and has managed to shift the public attention to this aspect. At the same time it is forgotten that a large part of the working class are migrants that are not allowed to vote because they aren't German citizens. Seven to eight million people who live in Germany were excluded from the elections because of their nationality. The trade union movement should start addressing this exclusion.

Moreover the DGB should target the six million voters with a migrant history with topics such as racism, and discrimination on the labor - and housing market. The German trade union movement needs to take these topics seriously in order to pose a counter weight to the AfD and to struggle against the rise of the extreme right.

Neva: Thank you for this conversation!

Neva Low is a researcher at the University of Kassel and part of the research group "Beyond Summer 15 - Transformation of Euoprean Migration Policies during the Crisis." She studied Political Science at the University of Vienna in Austria and Labor Economics at the Global Labor University/Universidade Estadual de Campinas (UNICAMP) in Brazil. Her research focus includes migration, trade union politics and the European Union. She can be contacted at neva.loew@uni-kassel.de.

(1) A recent study conducted by the Berliner Institut für empirische Migrations- und Integrationsforschung (BIM) found that 21,7% of the member of the IG Metall had a migration history. This corresponds to the number of people with a migration background in Germany.