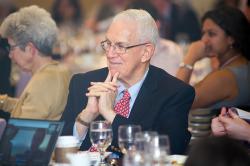 Organized by his former students, a conference honoring Professor Ronald G. Ehrenberg was held June 3-4 at the ILR Conference Center in King-Shaw Hall.

A labor economist who is widely known for his work in higher education economics, Ehrenberg  is Cornell’s Irving M. Ives Professor of Industrial and Labor Relations and Economics, and founder and director of the Cornell Higher Education Research Institute.

A member of the Cornell faculty for 42 years, Ehrenberg has authored more than 160 papers, authored or edited 26 books, and supervised the dissertations of 49 students, with several more in progress.

Scholarly papers with titles such as “The Growing Inequality of Colleges” and “Pension-Spiking, Free-Riding, and the Effects of Pension Reform on Teachers’ Earnings” were presented by academic colleagues, many of them former students.

Daniel Hamermesh, an economics professor at Royal Holloway University of London, said many of Ehrenberg’s co-authors and former students chose his 71st birthday to mark his influence on their research and careers with this conference.

“Not every influential scholar is honored this way. Ron is because so many other scholars have benefited from his constructive criticisms of their work, his professional advice and, in many cases, from the unsolicited personal help that he has given them,” Hamermesh said.

Excerpts from Ehrenberg tributes compiled for the event included:

ILR Dean Kevin Hallock, “Whenever I find myself at a professional fork in the road, I go straight to Ron. He has remarkably good judgment and, in my mind, cares about exactly the right things. He always has the best interests of the institution in mind.  He is also incredibly wise.

“I have served on several university-level committees with Ron. There have been several meetings where a dozen or so faculty, staff and administrators are working on some issue for 60-90 minutes and Ron comes out with precisely the clearest and most important point of the day.”

“Beyond all the professional honors, citations, awards, whatever, Ron stands out to me as a kind and caring human being. He really cares about other people.”

Michael Strain Ph.D. ’12, American Enterprise Institute director of economic policy studies and resident scholar, “My relationship with Ron was one of the best parts of my time at Cornell. Simply put, Ron was a constant breath of fresh air. Every conversation I had with Ron included his encouraging, warm reminders that I was lucky to be able to carve out years out of my life to study and learn, that I should be having fun, and that my life was about more than my work. Ron's office was an oasis. I treasure those memories, as I treasure him.”

Dominic Brewer, Gale and Ira Drukier Dean, New York University Steinhardt School, “Nothing prepares you for the moment when you first meet your mentor. The morning I arrived in Ithaca, I expected to meet someone larger than life, but here was Ron Ehrenberg.  He was a serious scholar, and yet he was approachable and above all human – a mensch is the Yiddish word for that.

“Over the past 27 years, Ron taught me so many essential life lessons.  For example, he taught me, ‘the academic work we do is important, but always keep it in perspective.’ I also learned that ‘the right variable may not be this one or that one, but the ratio of the two.’ And Ron showed me how we endure tragedy; how we live in the moment and draw our loved ones close and make a family.”

F. King Alexander, president of Louisiana State University, was an assistant professor at the University of Illinois, Urbana-Champaign, two decades ago when he met Professor Ron Ehrenberg, who would become a co-author and mentor.

“I am most grateful for the multitude of state and federal policy discussions that led to many new proposals which, in numerous instances, became higher education policy in many states and at the federal level.”

“Ron remains one of the most respected national voices in higher education. His love for the great value of our public colleges and universities has made him a tireless champion in the ongoing challenges to ensure that our higher education institutions place the public welfare and common good above that of the growing institutional desire to maximize prestige and wealth.”

Amanda Griffith Ph.D. ’09, associate professor, Wake Forest University, “Perhaps the most important thing that Ron does for his students is to support them in their endeavors, rather than push all students to positions at research universities. I made it clear from the start that I wanted to work at a liberal arts institution, and Ron set out to help me make that happen. Ron’s advice has always been priceless.”

“Ron has always been there for me as a great mentor and resource. If I have a question, I know that I can email him and quickly have a well thought-out answer. Ron’s caring has always extended well beyond his students’ academic work, to their personal lives. Ron educates the whole person, not just the economist.”

To hear audio ,view photos from the conference dinner, and to see a book of tributes and selected relective essays by Ehrenberg, Click the Link Below.

Also included is a video from Orley Ashenfelter and Alan Krueger who were unable to attend in person.