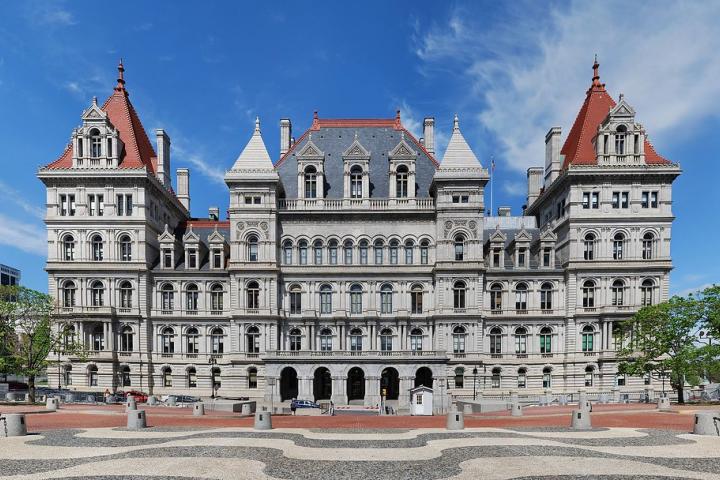 For the past few months, I have worked on a political campaign in the 108th assembly district in New York. The 108th district is largely urban, containing downtown Albany and Troy, as well as much of the city of Cohoes. It has been represented since 2012 by John McDonald III. I worked for Sam Fein, an Albany county legislator who was challenging Mr. McDonald for the Democratic nomination. One of the core issues of the campaign, and the one that inspired me to volunteer, was environmental injustice. As a result of this tenure, I was able to get a firsthand perspective on how environmental issues were affecting people in the area. There are three main examples of environmental injustice in the 108th district: the Dunn landfill, the Norlite plant in Cohoes, and the diesel trucks near the Ezra Prentice homes. The Dunn landfill opened in 2015 to hold debris from construction and demolition, including bricks, wood, insulation, and plastics. Some residents from the city of Rensselaer (where the landfill is located) object to the landfill's operation because it is located directly adjacent to a water tower, a cemetery, and the local public high school. Critics (such as the Rensselaer Environmental Coalition) contend that high winds can blow waste out of the landfill, and as a result children at the school could be breathing in dangerous particulate matter. Residents also complain about the stench from the landfill, and local residents allege that children are suffering from illnesses resulting from the landfill. The Norlite plant is located in the city of Cohoes, NY. The facility incinerates toxic firefighting foam (aka PFAS), and is contracted by the Department of Defense. The plant has burned twoand-a-half million gallons of PFAS foam originating from 25 different states. Studies have shown that the incineration process does not actually destroy the toxins in the foam, but instead distributes it more widely. As a result, the soil and water in the area are contaminated with PFAS. Local residents have remarked that the snow turns black in the winter due to the pollution. Disturbingly, a public housing complex (Saratoga Sites) is located right next to the facility. Saratoga Sites is unfortunately not the only public housing complex close to pollutant sources. The Ezra Prentice homes are 176 units of public housing located in downtown Albany. Many of the residents are senior citizens. Unfortunately, the facilities are right next to a diesel truck route. Repeated and sustained inhalation of the fumes from the trucks is hazardous to many of the residents' health, especially those with underlying medical conditions. These environmental injustices in the 108th district are clear examples of failures in our democracy. Nobody (especially young children) should be subject to breathing toxic fumes or particulate matter daily, where they live or attend school. Yet these projects are built without the broader consent of the neighborhood because these residents lack the economic and political power to make their voices heard. Environmental injustice exists in concert with economic and political injustice, and political and economic means must be harnessed to address these issues, and to redress the underlying imbalances.