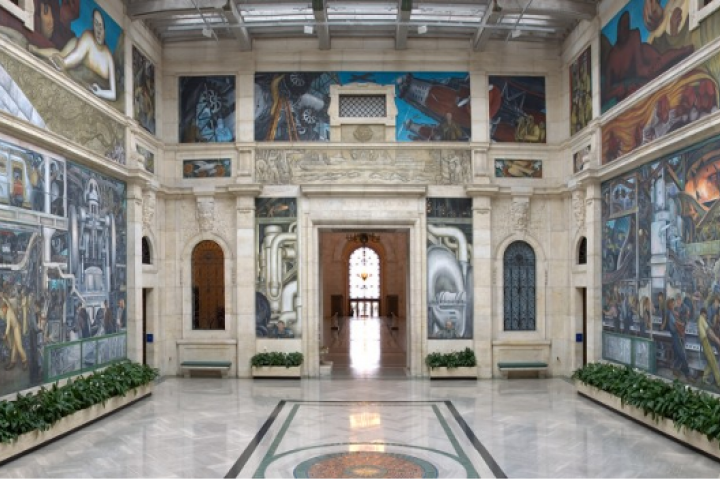 More often than not, the hardest questions appear to be the simplest: What is music? What is art? What is it that artists do? We all know artists make art, but that misses the aim of the question. I discovered this pearl of wisdom in a Kurt Vonnegut novel titled “Palm Sunday.” Vonnegut writes a question his mentor posed to his class: “What is it an artist does—a painter, a writer, a sculptor?” After a few sentences, Vonnegut reveals his mentor’s answer: “The artist says, ‘I can do very little about the chaos around me, but at least I can reduce to perfect order this square of canvas, this piece of paper, this chunk of stone.’” When one observes the Diego Rivera Detroit Industry Murals, one can understand how Rivera reduces to perfect order the squares of canvas that line the walls of the Detroit Institute of Arts.

The year of 1932, the year Rivera painted the Detroit Industry Murals, was the same year of the Ford Massacre. In this initially peaceful protest, workers began marching from Detroit to Dearborn, Michigan. They wished to present a list of demands to Ford Company management, but instead Ford security guards and policemen fired on the demonstrators. Ford security and Dearborn police injured more than 60 workers and killed 5 (one who was 16 years old). It was in this chaos that Rivera painted the murals of Ford workers and management.

Diego Rivera’s incredible artwork took approximately 8 months to complete. The mural consists of four walls in the North, East, South, and West directions. The North and South walls depict the interior and exterior production of the automobile. On the North wall, molten steel glows orange in the background as workers perform the grueling pushing and pulling of the necessary mechanisms to create the automobile’s engine. The skin of workers has a touch of green from formaldehyde exposure, and supervisors breathe down workers’ necks. On the South wall, Rivera pays tribute to the Aztec goddess Coatlicue by painting a pressing machine in her shape. This goddess was important in the creation of the universe, and Rivera places her among the workers whose labor is so important in the production of goods and services across the globe. On the East wall, Rivera creates themes of rebirth and life. A child remains in the center of the wall and tributes to the early agricultural advances of humans adorn the left and right sides. The West wall contains the dark themes of death and destruction. While technology has helped to bring about a better life, Rivera acknowledged the new threats technology has created. Bomber planes and gas masks, hawks and doves fill the spaces of the West wall.

Entire essays could be written about the intricacies of Rivera’s masterpiece. For example, the religious symbolism and scientific advancement meld together on the North wall where a child about to receive a vaccination sits surrounded by three doctors (a reference to the nativity scene where the child Jesus is surrounded by the three wise men). One can unravel many other themes in this magnificent mural that lines the walls of the Detroit Institute of Arts. I would encourage you to perform an online search to read more about the history of this mural.

What is it an artist does? Vonnegut’s mentor tells us that an artist knows they “can do very little about the chaos around them, but they can reduce to perfect order this square of canvas, this piece of paper, this chunk of stone.” Diego Rivera saw the chaos around him during the year of 1932, as workers demanded respect and dignity but received bullets and handcuffs. Amid this chaos, Rivera reduced to perfect order the walls that line the Detroit Institute of Arts. Now, in our tumultuous lives amid a global virus wrecking havoc and the gap between worker productivity and wages steadily increasing, we will at least have a beacon of stability, of perfect order, in the Detroit Industry Murals.