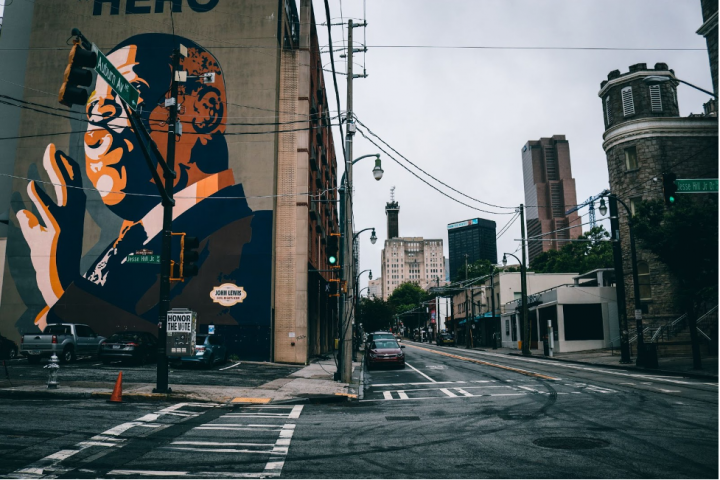 The above mural honors the late John Lewis, civil rights leader and 33-year congressman for Georgia’s 5th district. At 65 feet tall, the mural covers the entire side of a 6-story building in Atlanta’s downtown Sweet Auburn neighborhood. After Lewis’s passing in July 2020, the mural became a memorial, and Atlantans left flowers and letters at its base. The mural includes a John Lewis quote from his speech at the 1963 March on Washington. When the mural was dedicated in 2012, Lewis was the last living speaker from the March. It reads:

“I appeal to all of you to get into this great revolution that is sweeping this nation. Get in and stay in the streets of every city, every village and hamlet of this nation until true freedom comes, until the revolution of 1776 is complete.”

Every person who comes to Atlanta likely sees this mural. Framed by the rest of the downtown skyline, the mural can be seen coming on and off one of the city’s largest highways.

Lewis was a unique culture changer. He became a prominent activist at a very young age -- just 23 -- when he spoke at the March. That same year he moved to Atlanta to become Chair of the Student Nonviolent Coordinating Committee. Two years later, he led protests in Selma, Alabama, during what came to be known as “Bloody Sunday” when state troopers attacked the marchers. In the wake of the demonstration, Congress passed the Voting Rights Act of 1965. When Lewis became a congressman in 1987, he devoted himself to civil and voting rights.

Lewis had a unique philosophy. He advocated for getting in “good trouble”, meaning challenging authority in pursuit of justice. And he was unapologetic. In his March on Washington speech, he reminded his audience that the civil rights act they came to support should be approached with “great reservations,” that it would not stop police violence against peaceful protestors.

Lewis died during an already traumatic time in the country and city. A month earlier, police murdered Rayshard Brooks in Atlanta. I think activists and community members looked to Lewis for guidance after this murder. When senators Rev. Raphael Warnock and Jon Ossoff -- two successful Democrats in a formerly red state -- ran for office, they spoke of their responsibility to continue Lewis’s legacy on Capitol Hill.

Lewis was also deeply embedded in the community. Last July, the New York Times published an article headlined “They didn’t just love him. They knew him”. The article describes how Lewis’s neighbors would see him in the grocery store, buying his fruits and vegetables. He was a regular at a popular downtown restaurant, and attended a server’s retirement party. He was both a national and local hero, the master of the kind of community engagement the High Road encourages.

This is a great article about Lewis, written by the local paper.