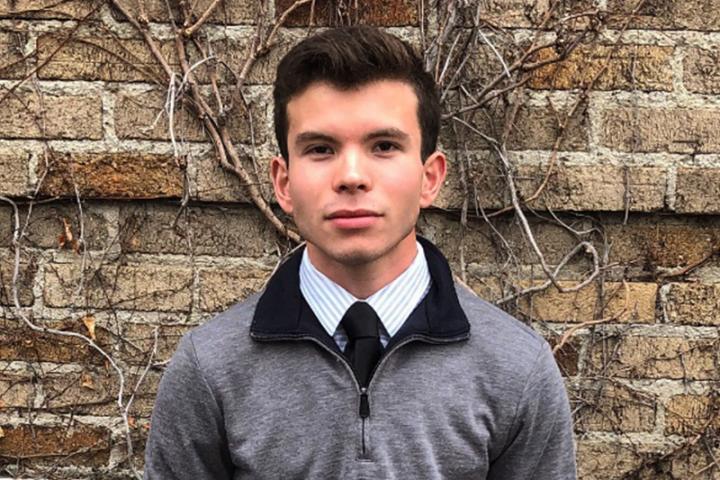 Colin Benedict ’21 has devoted the past three years to making Cornell University a more inclusive and welcoming place for Native American and Indigenous students, and he will build on that experience in the coming years.

Beginning in the fall of 2021, he plans to begin a three-year stint at Six Nations Polytechnic, a Haudenosaunee post-secondary institution at Six Nations of the Grand River First Nation in Brantford, Ontario. There, he will be enrolled in the school’s bachelor's of Mohawk language program, a linguistic immersion course where he will learn the Mohawk language and cultural aspects associated with the language.

After that, he anticipates obtaining a Ph.D. in Indigenous studies and eventually entering into an advocacy or education role – a path he feels uniquely suited for through his coursework at ILR and his extracurricular activities at the university.

“I chose ILR because of its flexibility,” Benedict said. “I wasn't entirely sure what I wanted to do, but the options that were available with the ILR major really spoke to me. Thanks to the wide variety of fields that industrial labor relations can be applied to, I'm in an excellent position to go down basically any career path that I choose.”

A Wolf Clan member of the Kanien’kehá:ha Mohawk, Benedict’s Indigenous name, Ari:wisaks, means “He Who Seeks Knowledge,” and is particularly fitting for the senior from the Akwesasne Territory, which straddles the U.S. and Canadian borders on both banks of the St. Lawrence River.

“The ties between my home community, the Akwesasne and Cornell, run really deep,” Benedict said. “One of the founding directors of the American Indian and Indigenous Studies program, Ron LaFrance, is from my community and I actually went to [Salmon River] high school with his granddaughter.”

LaFrance was a pioneer at Cornell, helping make Akwe:kon, the residential program house for the American Indian and Indigenous Studies Program, a reality and Benedict is happily following in those footsteps. He recently launched the Native American and Indigenous Mentorship Program. The purpose of the program is to retain more Indigenous students at Cornell by pairing incoming students with an upperclassmen mentor to help ensure their success once they come to campus.

Currently, the program has nine pairings of mentors and mentees who meet on a weekly basis. There are also bi-weekly sessions, led by Benedict, that focus on either the resources at Cornell that can be utilized by Indigenous students, or the historical aspects of Cornell’s relationship with Indigenous communities, specifically relating to the Morrill Act, which established Cornell as a land-grant institution at the expense of the Indigenous community.

Benedict, the former Cornell Student Assembly vice president of diversity and inclusion, also has a leadership role with the Native American and Indigenous Students at Cornell, which recently launched a campaign to address the Morrill Act’s role in Cornell’s founding and how it relates to Indigenous dispossession and genocide. According to the group’s petition, “To this day, the university upholds a tradition of profiting from acts of colonial violence and Indigenous erasure.” As a result, they have submitted a list of demands to the university that ranges from admitting more Indigenous students to returning land to the traditional Gayogo̱hó꞉nǫʼ leadership.

Academically, Benedict has held numerous internships, including a current position with the Equal Employment Opportunity Commission, where he interviews individuals filing discrimination charges against their employers. Another position, a research fellowship at The Worker Institute, paired Benedict with Professor James Gross to research education as a form of system oppression – work he hopes to continue after leaving Cornell.

“For part of my research, I want to really look at how Indigenous communities can make the education system into one that benefits them,” Benedict said. “Another aspect of my future research is to look at the intersectionality of labor and anti-colonial movements, specifically looking at the connection between the birth of early capitalism in the post-feudal era and the colonial process that brutalized indigenous peoples in the Americas. I hope that by looking at the similarities and the struggles faced by both groups of people, that could be a basis through which the labor movement, Indigenous communities and other anti-colonial movements can find some sort of common interests from which radical coalition building can be achieved in order to create systemic change.”