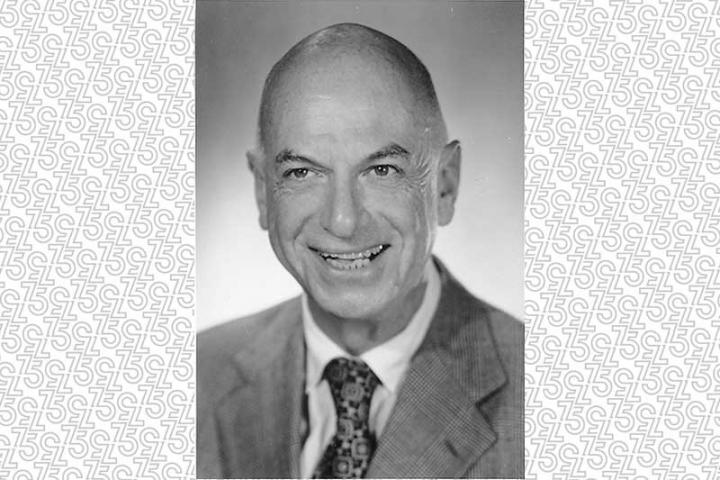 Founding faculty member Maurice Neufeld, the son of immigrants, arrived at Cornell in 1945.

A history scholar, he had worked as a union organizer, a government leader and a U.S. Army officer. Along with Jean McKelvey, he designed and taught ILR’s first classes.

Four generations of students experienced his dynamic classes, where history came alive. Neufeld, who pronounced his firm name “Morris,” often quoted poets, authors, leaders and activists. In a speech to the ILR Council in 1972, he spoke about the influence of humility and history on grassroots leadership in labor relations with the help of Shakespeare and Greek mythology.

Neufeld was known for the depth and breadth of his knowledge and experience, which he combined with his appreciation for the arts. He encouraged students to take a variety of courses outside of their discipline.

Neufeld was instrumental in establishing the multidisciplinary approach of the ILR School during its foundational years. Today, ILR’s teaching and research spans a broad range of disciplines.

Neufeld’s classes had a reputation for being rigorous. His high expectations for clear, purposeful writing and sharp critical and analytical thinking helped establish ILR’s commitment to a challenging learning environment.

His mentoring impacted students and colleagues. Outside of academia, Neufeld served as a labor consultant for the Xerox Corporation, an arbitration and mediation panelist for three states and the federal government, and an editor of scholarly texts.

Neufeld’s scholarship includes an English translation of Sophocles’ Antigone in an anthology of ancient Greek literature published when he was a college sophomore. It is part of a collection of articles, monographs and books he wrote throughout his career.