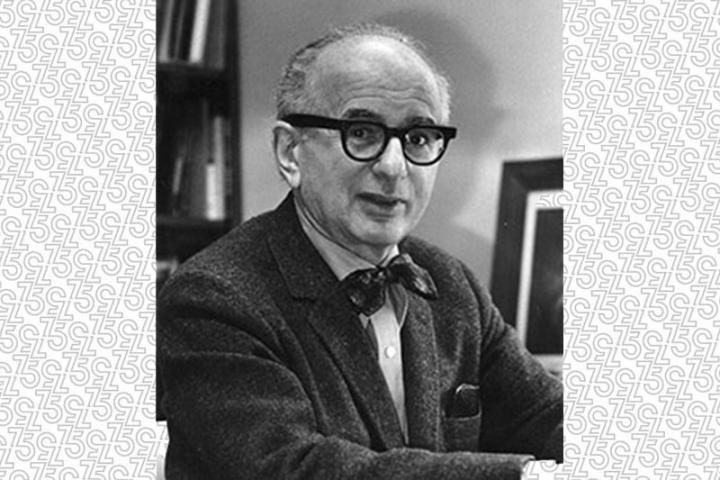 Konvitz was intentional in his career, even during his final moments as a Cornell professor. “I stop whatever it is I am doing, and what I have been doing for 37 years, 29 of them at this university.”

More than 8,000 students learned about the philosophical, political and religious foundations of American ideals and institutions, constitutional and labor law, and civil and human rights in Konvitz’ renowned two-semester ILR course titled “The Development of American Ideals.” Audio of some of his lectures can be heard here.

Konvitz likened his “American Ideals” course to American philosopher William James’ summer home with 14 doors opening to the outside.

“What I have tried to do in this “American Ideals” course is to take you to a house with ever so many doors, and all of them opening to the outside. The greatest deprivation is that which we impose upon ourselves -- our self-made prisons, the doors we ourselves close and lock, and sometimes after a while, we sometimes even throw away the key, so that by the time the end comes, we discover that we had not even lived,” Konvitz explained.

It is perhaps a testament to his legacy that U.S. Supreme Court Justice Ruth Bader Ginsburg, A&S '54, who has opened many doors for herself and countless others, was one of his students.

Before Konvitz began teaching at Cornell Law School and the School of Industrial Labor Relations in 1946, he taught pioneering courses on civil rights at the New York University Law School and at the New School of Social Research. He also worked as one of three assistant general counsels to Thurgood Marshall on cases involving police brutality, lynchings and discrimination.

In addition to being a founding faculty member of the ILR School, Konvitz also founded Cornell’s Department of Near Eastern Studies and the Program of Jewish Studies.

At his last lecture, Konvitz continued, “My life and my work are by no means finished … there is more work to be done.”

After he retired as a professor, he continued to write books and articles on American constitutional law that have been cited in U.S. Supreme Court opinions. His body of work reflects his most important ideals and the influence of philosophers and authors he admired, especially American philosopher Ralph Waldo Emerson.

Konvitz, who died in 2003, led the Liberian Codification Project, which drew up the statutory laws for the Republic of Liberia for nearly 30 years starting in the mid-1950s.