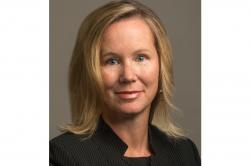 In the following Q&A, adapted from content prepared by Corning, Pambianchi details how the corporation championed pay equity as part of its diversity and inclusion initiative and how it has achieved 100 percent pay parity between men and women.

She also discussed ILR experience as an undergraduate and as a member of the Center for Advanced Human Resource Studies.

Did you explore pay equity issues as an ILR student?

Yes. As an ILR student at Cornell, my labor history and economics, collective bargaining, and compensation classes provided me with the deep underpinnings for how to think about issues of fairness and equity in the workplace and in our larger society. Through my studies, I built an important technical foundation that serves me to this day in my role at Corning Incorporated. I was also given the gift of a strong framework for understanding my responsibilities as an ILR graduate. I learned that as a leader in any role – labor, business, HR, the legal profession, etcetera – we must keep in mind our duty to advocate for those who cannot advocate for themselves. One of the books I read as a student that influenced me in this regard was Moral Man and Immoral Society: A Study in Ethics and Politics by Reinhold Niebuhr, which taught us that groups of individuals can behave in a way that individuals will not. When I bring that perspective to the 2017 workplace, it is clear to me that allowing issues such as pay inequity and discrimination to persist is a failure of leadership – period. We must all do our part as leaders and ILR alumni to eliminate these issues from the 21st century workplace.

After graduating from ILR, how did your first experiences in the working world align with the perspective you had about women in the workplace?

As an ILR student, I did not take a single course about women in work because I thought those issues were solved in the 1960s. I realized I could not have been more wrong about that when I got a job in the beverage industry at 22 years old. My classes at Cornell were evenly mixed, with 50 percent men and 50 percent women, so I expected to see those numbers reflected when I entered the workforce. In reality, I was the first exempt-payroll female in all of the six locations that I covered. I couldn’t help but wonder, “Where did all the women go?” I carried this question with me as I progressed through my own career journey. One of the factors that attracted me to Corning when I joined in 2000 was the company’s overall mission and vision, and the legacy of being one of the greatest institutions in the world committed to research, science and development. And the second factor that attracted me was the high value they place on the individuals who make up the organization.

As a member of the Center for Advanced Human Resource Studies, how do you draw on the group to help inform decision making at Corning?

The CAHRS group is a phenomenal group of organizations dedicated to studying and developing best-in-class human resources capabilities and systems for the working world. I find the CAHRS organization to be a very valuable and critical organization for keeping me and my Corning HR team connected with top researchers, current literature, and world-class HR practitioners in other highly reputable companies. Through the CAHRS meetings and discussions, we are able to share ideas we have and or learn of something another company or peer is encountering and how they are approaching their solutions. The environment is completely collegial, open and dedicated to the betterment of research, practice and the world of work.

What is the back story on why Corning was highlighted in this feature?

A Bloomberg Businessweek reporter named Claire Suddath decided to tackle this topic … Her research showed that wage gaps originally narrowed from the 1960s to the 90s and then the problem stayed more or less the same for the past 20 years.

She found a number of news articles from the 1980s that mentioned Corning. The company was at the forefront of addressing what at the time was this very novel idea that women and minorities were not being represented at higher levels in companies, not through their own failings, but because of the corporate system that worked against them. So, she wanted to see what we had done back then and what we're doing now as leaders on this front.

What drives Corning to take a leadership role in this fight?

Fundamentally, paying men and women equally for doing equal work, inclusive of experience and performance, is just the right thing to do. And it’s consistent with Corning’s values and our commitment to diversity and inclusion, both of which are so critical to our success. I feel we would be failing our employees if we were a company that was cited as not having strong practices in this area.

Additionally, the way we in HR have approached pay equity is reflective of our corporate culture. For any critical program at Corning, you have to have process rigor and robust systems in place to make real progress, and you have to apply metrics. As an engineering culture, we're not afraid to measure what we're doing in a particular area and say we're not as good as we need to be, and identify the things we're going to do to improve. Our human resources organization has that same discipline. We want our workforce to be reflective of the available talent pool, and we want to promote and pay our people equally. That’s why we have invested in sophisticated tools that help us measure trends and analyze root causes so that we can implement corrective actions and constantly improve.

Corning’s 100 percent pay equity – how is this computed?

Over the years, our HR leadership team regularly conducted annual reviews to make sure there was no gender or ethnicity bias in our pay system, which factors in external market benchmarks, internal salary ranges, hierarchy structure and performance ratings. Seven years ago, we decided to take it up a level. We started working with a high-power data analytics firm to deeply examine our pay system. Then, for the last four years or so, we’ve built on that by working with a consulting firm that specializes in this practice.

When we first started doing this kind of analysis, we found we were at about 99.2 percent of women's pay by comparison to men for equal work, inclusive of experience and performance, etcetera. Over the past three years or so, we've increased it to about 100 percent parity.

In the past, it was a year-long process to get all the data downloaded, do the evaluation and make manual adjustments to correct gaps. Now, we've accelerated the process in the U.S. so that we can do it quarterly and make real-time adjustments. Starting this year, we’ll be extending the process for our entire global workforce.

Human resource managers from around the company will call us saying, "I'm doing some hiring and I want to make sure I maintain my pay equity when I extend my offers." The compensation team uses the analytics tool to provide guidance and to look at how we bring people into the businesses and staff groups to sustain pay equity across the board.

What else comes into play in maintaining parity?

For one, if you're not bringing in a workforce that matches the diversity that's available, you've already lost. So step one for us, starting in 2004, was to make sure we're hiring to availability as determined by the United States Census Bureau for every job classification. You can't do what you can't measure, so we put in some very robust metrics that enable us to understand the availability for a particular job every time a requisition is opened.

Second, we make sure that our promotion rates are tracking inside the company so that women and minorities are promoted according to their performance, their contributions and their areas of expertise. And, we work proactively to make sure diverse emerging talent is aware of available opportunities for promotion.

Then, the third thing we do is manage attrition. We focus heavily on making sure we're not seeing minorities and women leaving at rates that are greater than the majority.

By doing these three things in conjunction with our Diversity in Leadership initiative, we’ve made great progress. Today, our attrition rate is approximately three percent in the U.S. and five percent globally. We have three women and one African-American on Corning’s board, and there are two women and two African-Americans on the Management Committee. Additionally, we've tripled the number of Asians and ethnic minorities and doubled African-Americans and women in the management and leadership ranks across the company.

From a business perspective, why is it beneficial to prioritize diversity and inclusion?

We know that successful innovation at Corning depends on diversity of thought, experience, background and the unique traits of individuals working in a collaborative, inclusive culture. We foster a culture in which people can bring their whole selves to work, be fully included and feel safe in debating, challenging and exchanging ideas. Diversity truly inspires innovation and provides a competitive advantage.

In addition, there is a solid business case for diversity and inclusion. McKinsey & Company published a report in 2015 showing companies in the top 25 percent for gender, racial and ethnic diversity are more likely to have greater financial returns than their peers. Further, the report shows that in the U.S., for every 10 percent increase in diversity on a company’s senior executive team, earnings before interest and tax rose 0.8 percent. That’s significant.

How do Corning’s diversity and inclusion initiatives impact your workplace culture?

Almost 70 percent of the salaried professional employees who work for Corning are engineers and scientists. As we compete to recruit the world’s best talent, we recognize candidates are looking at value sets of the companies they're considering working for: How inclusive are they? How diverse are they? And it’s not just diverse or minority candidates who ask these questions. A majority engineer graduating from a program may want to know that he's going to work for a company that values diversity, that has inclusive policies and that follows standards like the Human Rights Campaign Corporate Equality Index (Corning has scored 100 percent on the index for more than 10 years).

Finally, we want to hire people for life. Our products aren't typically something you can buy off the shelf. It's a substrate in a catalytic converter that treats the emissions from a vehicle, or it's the optical fiber in a network that someone's deploying, so we have to be able to collaborate with the engineers from our customers’ companies to design our products to ensure they meet end-product requirements. All of this requires a long tenure, so we greatly value lifetime employment. We put a lot of effort into how we hire, who we hire and making sure they want to work in this highly collaborative, inclusive culture. To that end and to leverage the competitive advantage diversity brings to Corning, we are focused on attracting, developing, promoting and retaining the world’s best talent.