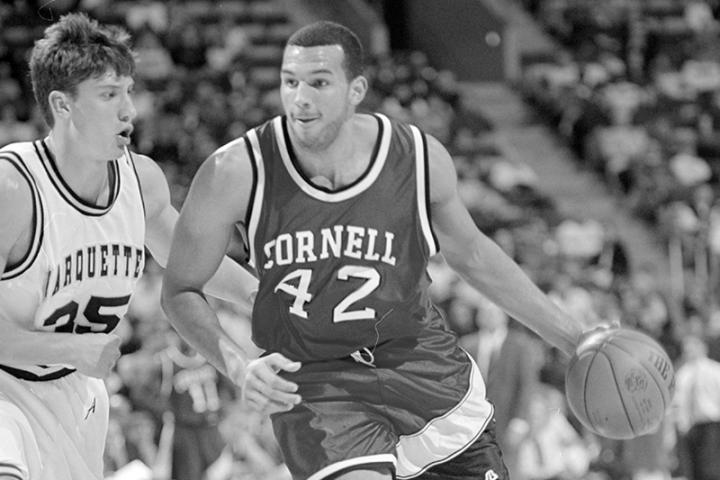 Jeffrion Aubry ’99 began playing basketball when he was nine years old. The career that basketball would eventually lead to, however, was hard to imagine at that time.

“My core group of friends had started playing basketball,” Aubry remembers. “They were pretty good and I was not.” At first, these friends beat Aubry every day. One day, though, they let Aubry win. “They let me win because I worked so hard and it was a shame I never got to win. These were great friends, except that it drove me crazy that they had to let me win and that they felt the need to do it.”

This frustration gave way to motivation and Aubry began to improve. After a successful high school career and record-setting career at Cornell, Aubry spent three seasons in the NBA’s developmental league. Now, he is senior director of player development at the National Basketball Association. “Never in my wildest dreams did I imagine that this [career] would happen,” Aubry says.

When Aubry was recruited to play at Cornell, it became clear that ILR was the place for him. At ILR, Aubry found a school that combined all of his interests, from collective bargaining in sports to labor law and organizational behavior. “What struck me was that this marriage of economics, history, law, psychology and social justice would not just prepare me for law school, but also provide me with both soft and hard skills that can be applied to the working world,” he said..

Aubry’s interest in the world of work was driven by his grandfather, who had worked as a merchant marine and would often bring his grandson to his union meetings. “I remember him feeling like he was a part of something, it was a brotherhood,” Aubry said. When Aubry sat down to select a college, that experience made ILR the clear winner.

Twenty-two years after graduating from ILR, one of the experiences he remembers most is taking labor history. He found learning about the origins of the labor movement and how it intersects with race and class enlightening. “This really filled in a lot of gaps for me in understanding American society,” Aubry said. These lessons informed Aubry’s life. For example, during his freshman year, Aubry attended the Million Man March in Washington, bringing what he learned in labor history with him.

Another aspect of Aubry’s ILR education that he relies upon in his role at the NBA is the psychology taught in ILR’s organizational behavior courses. Although he doesn’t remember the names of all of the theories he learned, he remembers how the concepts relate to workplace dynamics and sees them play out daily. “Knowing how to navigate inside an organization is really the difference between success and failure,” Aubry said.

In designing education opportunities for current and former NBA players, Aubry says he relies on what he learned at ILR. “The educational strategies employed by ILR professors are really helpful as I go through my journey as a professional and building educational experiences,” said Aubry, who answered several questions about ILR’s impact.

How has your ILR education changed you?

ILR helped me refine into who I am today. I had an opportunity one of the summers when I was in school to work at a very small marketing firm in Atlanta. That summer, there was a lot of staff coming and going and because of that, I ended up in an assistant manager role. Here I was,19 years old, interviewing folks, hiring people and enforcing HR policies. I got to have a really practical view of the things we were learning and it added so much context to the lessons at ILR that were already fairly practical about how a workplace functions. The things I learned about how to deal with people and how to manage relationships in the workplace have really informed my whole professional career, both as a player and afterward.

How are you making an impact through your ILR education?

I go back to the National Basketball Players Association and that relationship – my ability to understand the issues and their concerns from their perspective, even just their points of emphasis, really helps me be a good partner and to be another champion of the players within the NBA. Obviously, it helps that I played, so that makes me sympathetic to their journey and their issues, but my ILR education has given me the background and the histories of labor movements. It definitely makes me more effective in my role so that I can bridge the gap and help with the cooperation between the players association and the NBA.

How might the mission of ILR shape the next 75 years of work, labor, and employment?

This last year really tops it off. So much of the workforce has been forced virtual, so managing virtual workforces will bring a number of issues that are going to have to be addressed. Everyone is so much more accessible at home – there’s going to be a ton of issues to deal with concerning virtual workspaces. There’s even the psychology behind what you can and can’t really glean from others when you’re working remotely. I think that this past year will really inform what the next couple decades of training, learning and research will look like in ILR.